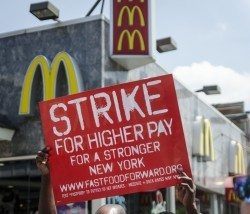 In addition, according to the New York Times’ Steven Greenhouse, demonstrations are planned for another 100 cities. On Sunday Greenhouse wrote:

The movement, which includes the groups Fast Food Forward and Fight for 15, is part of a growing union-backed effort by low-paid workers — including many Walmart workers and workers for federal contractors — that seeks to focus attention on what the groups say are inadequate wages.

The fast-food effort is backed by the Service Employees International Union and is also demanding that restaurants allow workers to unionize without the threat of retaliation.

Much of the fast-food strikes’ focus will be on pushing state minimum wages to $15 per hour. (The federal minimum wage, which 22 states follow, is $7.25 per hour.)

For McDonald’s, the strikes will come following the embarrassing revelation that the mammoth chain has been advising its employees, via a company website, how to stay healthy and stretch their meager wages. Among other things, its McResource Line suggests that workers “Break your food into pieces. If you take smaller bites you’ll probably eat less,” and “Sell your unopened Christmas presents and other possessions on eBay or Craigslist.”

Related Topics:fast-food workers
Up Next