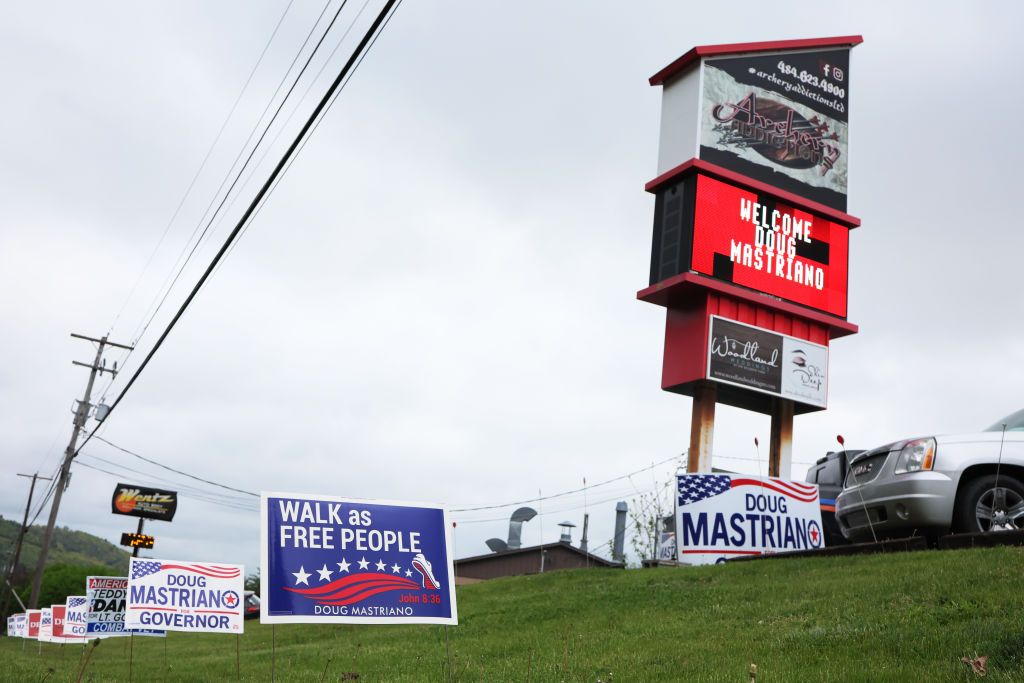 In Murrysville, Pennsylvania, about 15 miles from Pittsburgh on the edge of Westmoreland County, the 2022 Democratic Party Headquarters lies in the same lot where the county Republican committee’s Trump Victory Center sat in 2020. Democrats, a stark minority in deep-red Westmoreland, hope that’s  a metaphor for what’s to come.

It’s raining off and on the day of the rally. The small building is packed, though with fewer people than organizers had hoped. Still, 40 isn’t too bad considering the rain, and the fact that Fetterman himself hosted a last-minute rally in Pittsburgh just before. Voters could have traveled 20 minutes further to see their candidate instead of the surrogates who are here.

One rally attendee says that he’d learned of the Fetterman rally the day before. “But I came here,” he says, “because I told Michelle I would.”

McFall is wearing a long black coat that makes her look elegant even with jeans underneath. Standing at the door to welcome Democratic supporters, she reminds me of a dinner party host — charismatic enough that people keep their promises to you; tired from working all day, but energized for whatever’s next. 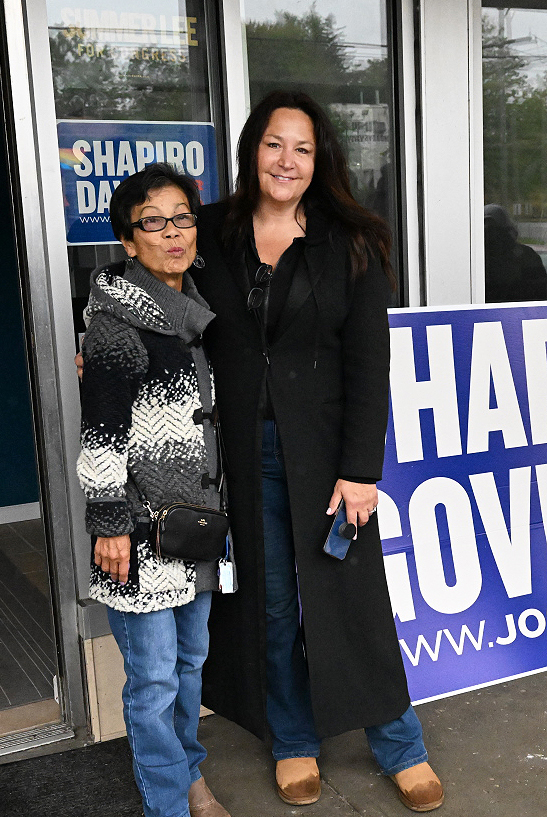 “I decided to run for chair of the party to set a new tone, put an emphasis on grassroots organizing [and] messaging, and make sure we’ve got candidates on the ballot in every seat,” she says. She lives in Murrysville, which she describes as “a Republican hotbed.”

The Democratic Party in this county is on life support. There are no countywide elected Democrats (save for the minority commissioner on the bipartisan county commission).

Debbie Watt, posted at a table at the entrance of the rally, tells me that she doesn’t consider herself political. She is the president of the Murrysville Export Democratic Club. Watt got involved in politics in 2016 — before Trump, the club was more of a social thing. Now she considers the work almost beyond politics: It’s about “saving the country,” she says.

As we speak, it’s clear Watt isn’t feeling very well. Fully masked, she sits down and pushes herself further into a corner, away from others. But she wasn’t about to miss the rally.

After all, the stakes for this election are higher than ever. Sure, politicians say that every election — but in this one, Republicans are running QAnon supporter and Capitol insurrectionist Doug Mastriano for Pennsylvania governor. And tilting the balance toward Democrats in the Senate could depend on Fetterman, still recovering from a stroke, flipping the open Pennsylvania seat blue.

But each time I drive past a Shapiro or Fetterman sign in Westmoreland, I feel a little stab of unexpected recognition, like seeing someone you know from back home when you’re visiting a different town.

As many Democrats at the rally explain, Westmoreland used to be a Democratic stronghold. How did this happen?

Westmoreland’s history is a familiar story. Many of the county’s towns and cities were centers of industry. Jeannette: home to glass factories as well as tire and rubber manufacturing. New Stanton: had a Volkswagen plant that was the first foreign car manufacturing site in the U.S. since 1931. There was, of course, steel manufacturing all across the county. And coal mining — the more than 100 abandoned mines under Westmoreland’s soil are a testament to that.

Then came deindustrialization, and the Pittsburgh exodus. Why are there Steelers bars in cities all across the country? Because after the steel industry collapsed, young workers in southwestern Pennsylvania fled. Based on the 2020 census, Westmoreland County ranks seventh in the U.S. for natural population loss — more deaths than births.

Since then, slowly, and then all at once (see: 2016), counties like Westmoreland swung hard toward the GOP.

During a workshop at an American Legislative Exchange Council (ALEC) policy summit last year, former Pennsylvania senator and Republican presidential candidate Rick Santorum explained how Republicans can keep power through structural imbalance alone, according to a recording obtained by the Center for Media and Democracy. Because so many Democratic voters are concentrated in urban areas, Santorum explained, “Rural voters, even though there are fewer of them…actually have an outsize granted power under this process.”

In other words, elections can be won based more on geography than on the absolute number of votes. “[W]e may not even be in an absolute majority when it comes to the people who agree with us,” Santorum said. “But because of the way the concentration of votes has changed in this country, we can actually accomplish things.”

To overcome the obstacle Santorum is describing, Democrats will need to win back rural voters — and people in “rural meets urban” suburbs like Westmoreland County. While these voters are not flocking to the Democrats yet, there is evidence to suggest that some former Republicans would prefer not to identify with a party at all. In 2021, more Pennsylvania Republicans changed their registration to no affiliation, or a third party, than Democrats did for the first time in at least a decade, likely because of the Jan. 6 insurrection.

For Democrats in places like this, cutting into the Republican margins of victory is often the most immediate goal of their campaign work. There is a clear-eyed assessment that they’re not going to be winning elections anytime soon.

When Democrats put up a 4 foot by 8 foot Shapiro sign in the city of Latrobe, it was smashed to pieces in less than 24 hours.

But how to target both those new independents and the old Democrats?

“We don’t have a single Democratic elected person,” says McFall by way of explanation. “We’ve had 10 solid years of being unrepresented, [so it’s] hard to ask people to vote when the results are a pattern of disappointment.”

“It’s hard to be a Democrat in Westmoreland” is something I hear multiple times at the Murrysville rally. The problem is more than low voter registration or turnout figures — there’s also open hostility. For instance, when the Democrats put up a 4 foot by 8 foot Shapiro sign in Latrobe, it was smashed to pieces in less than 24 hours.

But, says McFall, “Instead of just laying down dying like we usually do,” the Democrats raised money based on outrage generated by the vandalism. “Now we have some digital billboards,” which aren’t as easily destroyed by sledgehammers.

The plan is not to just canvass and dip, like many Democratic campaigns have done in the past. Instead, the Democrats aim to establish a permanent community presence. “I was elected in June, and [since then] we’ve had [about] 15 events throughout the county — low cost events with high emotional energy,” says McFall. People can come out, see actual Democrats set up in Westmoreland, and get a sense “that they’re not so alone.” When the Democrats “tap and fill the emotional need, then we can ask people to fill the [party’s] need,” like contributing to races or even running for office.

Aaron Moore, an organizer with the local, grassroots group Voices for Westmoreland (VOW), hopes that’s the case. “The people I would like to get engaged are the people who have been disenfranchised … who have felt neglected or left out. The people who are used only when elections arise, and then when the [candidate gets] elected, [their voters] are forgotten about,” he says. He shares that he has tried to contact campaign volunteers after elections but could never reach them.

Moore lives in Arnold, a city poorer and more diverse than most. It’s also one of the two cities in Westmoreland that leans Democratic.

If it were a different national election, Moore might not be as committed as he is to canvassing for the Democratic candidates; he might, for instance, be more concerned about Arnold’s local elections. But to Moore and other organizers across the state, this election is different. “This particular election is the fight for our democracy…it’s a dangerous election,” he says, that will expose whether this country “is a white supremacist nation or a free nation.”

But “it’s hard to convince people who have been marginalized,” says Moore. “For them, it’s the same old same old,” no matter who is in office — or so the thinking goes. He adds that campaigns can take advantage of this demoralization, noting how the Republicans on the county commission voted in September to remove the lone drop box for mail-in ballots in front of the Westmoreland County Courthouse.

VOW, connected to the national organization People’s Action, has deep canvassing initiatives throughout the region. Deep canvassing conversations are marked by longer discussions with community members about what issues matter most to them and are focused on building relationships instead of just mobilizing voters. It’s a slow process, but ultimately fruitful, say VOW leaders.

McFall, the Westmoreland Democratic chair, is committed to establishing a community presence to help revive the local fortunes of the Democratic Party. And Moore, along with VOW, is focused on engaging the community voice to revive democracy in his town. What’s next?

“It’s one thing to ask people to get involved,” says Moore. “We need to get some wins.”

‘Young People Are Fed Up’: Inside the Fight to Defend Young Voters

Six Things Corporations Can Do to Not Undermine Democracy