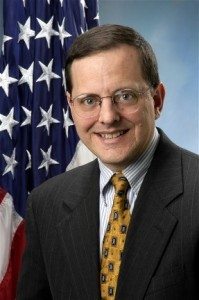 On Wednesday, community activists and homeowner groups got some good news from Washington. President Obama announced that he was removing Ed DeMarco, the Bush-appointed acting director of the Federal Housing Finance Agency (FHFA). FHFA regulates Fannie Mae and Freddie Mac, the bailed-out mortgage financiers that together own or guarantee 60 percent of the nation’s mortgages.

For more than a year, activists have waged a “Dump DeMarco” campaign because of his stubborn refusal to help troubled homeowners avoid foreclosure by requiring banks to modify “underwater” mortgages that are higher than the market value of the homes. Under orders from DeMarco, both Fannie Mae and Freddie Mac have refused to permit banks to write down mortgage principal for underwater homeowners. He called such write-downs a “free lunch” that would discourage homeowners from paying their mortgages.

But Obama’s Treasury Department countered that write-downs would save money by reducing the chances homeowners would default on their loans. And a Congressional Budget Office report released Wednesday estimated that even a modest mortgage principal reduction program (reaching only 95,000 homeowners) could save taxpayers up to $2.8 billion.

The Obama administration has said it supports this approach to reset mortgages to fair-market value — called “principal reduction” — but until now the president was unwilling to fire DeMarco, who Bush appointed to the position in 2009.

The pressure to oust DeMarco has been mounting from both activists and elected officials frustrated by his intransigence to help consumers and his unwillingness to hold banks accountable for their misdeeds.

“Here’s some random idiot who ends up in charge of this agency, who is doing actual damage to the housing industry and my constituents,” Rep. Zoe Lofgren (D-CA) told the Los Angeles Times last year. “He is intransigent, incompetent and should be removed.”

“We need to be finding ways to keep people in their homes, not kicking them out,” said Rep. Keith Ellison (D-MN) at a rally in Minneapolis last month sponsored by Occupy Homes Minnesota. “Other members of Congress and I have taken the extreme but reasonable step of calling for [DeMarco] to be fired. Big banks need to change the way they’re doing business in our communities. Enough is enough.”

In February, members of the Michigan Organizing Project, a community activist group, placed signs on freeway overpasses across Detroit demanding “Obama: Dump DeMarco.” In March, activists disrupted DeMarco’s statements before a congressional hearing that was broadcast on C-SPAN.

Last month, nine state attorneys general — including Eric Schneiderman of New York, Kamala Harris of California, and Martha Coakley of Massachusetts, who last year had pressured major banks to agree to a $25 billion settlement to help troubled homeowners — urged Obama to replace DeMarco. “Our nation’s economy will never fully recover until we address this foreclosure crisis,” explained Coakley at the time.

On Sunday, April 21, more than 500 protestors from National People’s Action, a nationwide network of community organizing groups, descended on DeMarco’s home in Silver Spring, Maryland, a Washington, D.C. suburb, carrying 15-foot puppets of the federal housing official and signs reading “Save Our Homes” and “Dump DeMarco.”

Activists have mounted similar protests throughout the country to persuade Obama to oust DeMarco and to raise public awareness about the ongoing housing crisis.

The anti-DeMarco campaign is part of a broader movement to hold Wall Street banks accountable for crashing the economy, destroying the housing wealth of millions of homeowners, and refusing to help families facing foreclosure through no fault of their own. The crusade has been led by a crazy-quilt of community organizations, consumer groups, MoveOn.Org, and unions under the banners of the New Bottom Line, the Home Defenders League, the Coalition for a Fair Settlement, and Americans for Financial Reform.

Beginning around 2000, using a variety of risky, reckless, illegal, and predatory practices, banks preyed on unwitting homeowners, leading to an epidemic of foreclosures by mid-decade. Millions of low-income and middle-class families have watched their major source of wealth stripped away, their neighborhoods decimated by falling property values, their cities devastated by dramatic declines in property tax revenues, and their future economic security destroyed.

Since 2006, more than four million families — disproportionately people of color — have lost their homes. Another four million are currently at risk of foreclosure. About 14 million homeowners are now underwater, owing more on their mortgages than their homes are worth. The total amount of underwater mortgage debt is $1.2 trillion.

Almost all of these troubled homeowners are in this predicament through no fault of their own. Housing prices nationwide fell by a third between 2006 and 2012. Families have lost nearly $7 trillion of home equity.

The activists’ demand for principal reduction is not a request for charity but a way to reverse the economy’s free-fall. If mortgages were reset to the fair-market values of homes, this would not only fix the foreclosure crisis but also pump $71 billion into the economy annually and create over one million jobs a year.

DeMarco has been “the biggest roadblock to our country’s economic recovery,” said Tracy Van Slyke of the New Bottom Line coalition.

Obama has nominated Congressman Mel Watt, a veteran Democratic congressman from North Carolina, as a permanent nominee to replace DeMarco. First elected in 1992, Watt has served on the financial services committee, where was a strong voice against banks’ predatory lending practices.

“Mel Watt has a long history of fighting predatory lending and supporting economic justice,” said Vivian Richardson of San Francisco, a leader of the Alliance of Californians for Community Empowerment (ACCE), one of the community groups involved mobilizing homeowners to protest the banking industry’s malfeasance. “ACCE is calling upon the Senate for a swift confirmation of Congressman Watt and urging him to support principal reduction as a core strategy to save our communities and jumpstart the economy.”

In 2010, Obama nominated Joseph Smith, at the time North Carolina’s banking regulator, to replace DeMarco, but Senate Republicans refused to confirm him. Senate Republicans will likely try to block Watt’s nomination, too, in order to keep DeMarco in the position. Many Republicans — who have close ties to the banking industry and oppose principle reduction — are likely to criticize Watt for his longstanding criticism of banks’ discriminatory lending practices.

Senator Elizabeth Warren (D-MA), a longtime critic of the banking industry, praised Obama’s choice of Watt and called on the White House to immediately remove DeMarco from his post, rather than waiting for the Senate to approve his replacement. “Under DeMarco’s leadership, the FHFA has refused repeatedly — often with cold indifference — to work with families struggling to save their homes,” said the former Harvard law professor who specialized in bankruptcy law.

“Families deserve an FHFA that pursues helpful policies like principal write-downs and abandons senseless rules like those that prevent foreclosed homes from being re-sold to their original owners,” Warren said.

Discovering the Power of a Good Job