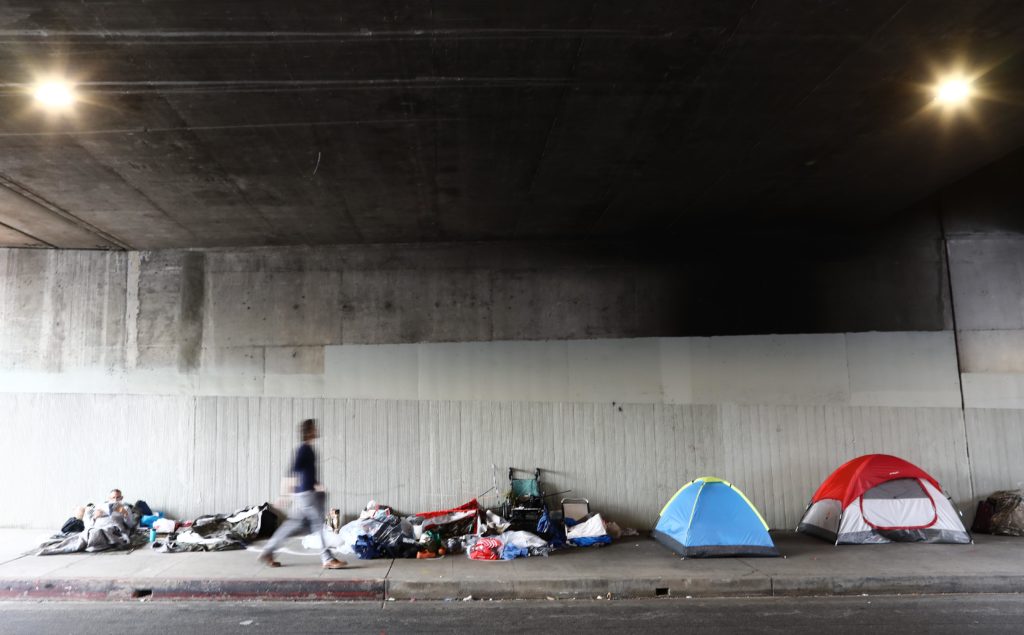 Some homeless advocates say local officials should look to other countries that take much more aggressive roles in providing housing for the poor.

COLD HARD DATA can focus the mind of voters and politicians alike. Los Angeles voters have been generous on homelessness issues in recent years, even if they have not always welcomed the siting of shelters in their neighborhoods. In 2016, 77 percent of city voters approved Proposition HHH, a 10-year, $1.2 billion bond measure to pay for homeless housing. One year later, county voters passed Measure H, a one-quarter-cent sales tax to fund homeless services.

On June 3, however, Los Angeles County reported a 12 percent increase in the number of people sleeping on streets or in shelters. The city’s increase was 16 percent.

This year’s homeless count—carried out by volunteers in January—is the first to reflect the full-year impact of Measure H funding. Los Angeles County Supervisor Mark Ridley-Thomas declared the results “stunning.” Los Angeles Mayor Eric Garcetti likened the crisis to the 1994 Northridge earthquake and pledged to “do more, faster.”

But some homeless advocates say local officials need to reevaluate their approach, and even to look to other countries that take much more aggressive roles in providing housing for the poor.

“There is a background problem of too much poverty and not enough housing, but it doesn’t have to produce the same volume of homelessness that we have,” said Gary Blasi, a retired UCLA law school professor and longtime homeless advocate.

Activist: “We’ve been fighting for a right to housing, not a right to shelter.”

But the overriding message thus far from local leaders has been to keep on keeping on. The economic forces that have kept wages low and pushed housing prices high are simply too powerful for the region’s governments to rein in on their own, they say. That’s why youth, the elderly and whole families are tumbling into homelessness at a faster rate than they can be helped onto their feet. And—absent the generosity of voters—conditions for the homeless in the city and the county could be far worse. Garcetti noted that L.A.’s jump in homelessness was “about half” what it was in other cities across California.

Or, as Phil Ansell, director of the Los Angeles County Homeless Initiative, told the Board of Supervisors earlier in the month: “I think the core of our system is solid, and our provider network has performed in an extraordinary manner to make use of this massive infusion of Measure H resources.”

ONE DISTINCTIVE FEATURE of California’s homeless crisis is the vast size of its unsheltered population. In Los Angeles County, 75 percent of its 58,900 homeless are without shelter, versus only five percent in New York City, where the 61,800 without homes have a “right to shelter” as result of a 1981 consent decree. Historically, Los Angeles County has spent just a fraction of what New York City spends on its homeless, according to a 2018 state auditor report.

The number of homeless people on the street is also presenting the region with a public health crisis that has prompted city-led sweeps that uproot homeless residents from their encampments. It is also a political challenge and a daily reminder to those with homes of the indignities suffered by thousands at their doorsteps.

But L.A.’s homeless advocates do not wish Los Angeles to emulate New York City, where sky-high housing prices have also pushed the homeless population to rise, by about 10 percent per year since Mayor Bill de Blasio took office.

“We’ve been fighting for a right to housing, not a right to shelter,” said Los Angeles Community Action Network director Pete White, who works with the homeless on Skid Row. Blasi fears the human rights implications of a New York-style approach that, he said, could “allow the police to basically round everybody up and put them in big tents.”

THE DISHEARTENING PROGRESS on combating homelessness—and the seemingly intractable affordable housing crisis–has some advocates looking to Europe, where social housing is more politically feasible. Berlin has bought up more than a thousand apartments, with plans to sell them to local housing providers, the Huffington Post reports.

Gary Blasi points to Finland’s success in dramatically reducing homelessness in its capital through providing permanent housing right off the bat, a model that’s known as “Housing First.” This makes the provision of permanent housing unconditional and eschews the shelter system, which lacks the stability that someone struggling with mental health issues, addiction or poverty requires. To address the shortage of available apartments, the non-profit and government sector purchased apartments and old shelters, according to an account in The Guardian.

Jonny Coleman, a Democratic Socialists of America activist, told county supervisors this month that they should look to Germany for answers. “Expropriate livable space that exists in our city, right the fuck now,” said Coleman, who was one of 60 to testify at the emotion-packed meeting.

Blasi expresses his frustration more diplomatically. “I think there’s a growing consensus that maybe you can’t get there from here,” he said. The process of building brand new housing and siting shelters for the homeless is costly and painstakingly slow. Proposition HHH promised the construction of 1,000 new affordable and supportive housing units per year.

Should Los Angeles convert its store of city-owned office buildings to housing?

The first three housing projects—comprising 239 units—are expected to open up later this year. Los Angeles City Controller Ron Galperin, concerned that the money is not being spent with the urgency that matches the crisis, is preparing an audit of Proposition HHH funds.

The closest Los Angeles gets to Blasi’s favored Helsinki model is the county’s Housing for Health program, which targets people who frequently use its health services. The program funnels them into permanent housing and offers them services, said Blasi, while saving money by reducing participants’ use of county services. Along similar lines, White argues that the city could convert its store of city-owned office buildings to housing.

Daniel Flaming, president of the Economic Roundtable, a liberal Los Angeles think tank, is skeptical that a Finnish-style approach could gain traction in the U.S., which he says lacks the social cohesiveness and political culture of Finland. “I think it’s just too far from reality here,” says Flaming. “We’re a much less homogeneous society, so we have a lot less social consensus. And our housing market is so far out of whack.”

The county is 500,000 homes short of what is needed to meet its affordable housing requirements, according to the California Housing Partnership.

That’s especially true for those renting homes at the lower end of the market. The county is 500,000 homes short of what is needed to meet its affordable housing requirements, according to an April study by the California Housing Partnership.

Flaming would like to focus on prevention and for the county to invest more in helping people secure good jobs, “equipping people to be part of the labor force rather than just waiting for proof of victimhood,” he said. His Economic Roundtable has also developed a predictive tool that harnesses data to identify people who are likely to become chronically homeless so they can be targeted for services before they end up on the streets.

There was a time when the federal government built hundreds of thousands of units of public housing per year, notes Sam Tsemberis, a New York-based advocate of the Housing First approach who consults for the Los Angeles County Department of Mental Health. “Maybe people didn’t like it, or it wasn’t kept up well, but we didn’t have homelessness,” said Tsemberis, adding that the market can never provide for the poorest residents who lose their housing.

In the meantime, with little help from the federal government or the state, the county is doing what it can, County Supervisor Sheila Kuehl said at the June board meeting.

“I’ve compared us in the past to the guy that walks behind the horses and the parade,” she said. “That’s exactly what the county is. We are not making this mess, but everyone has said to us, ‘You have to clean it up.’”

Last Battle for a Toxic Community