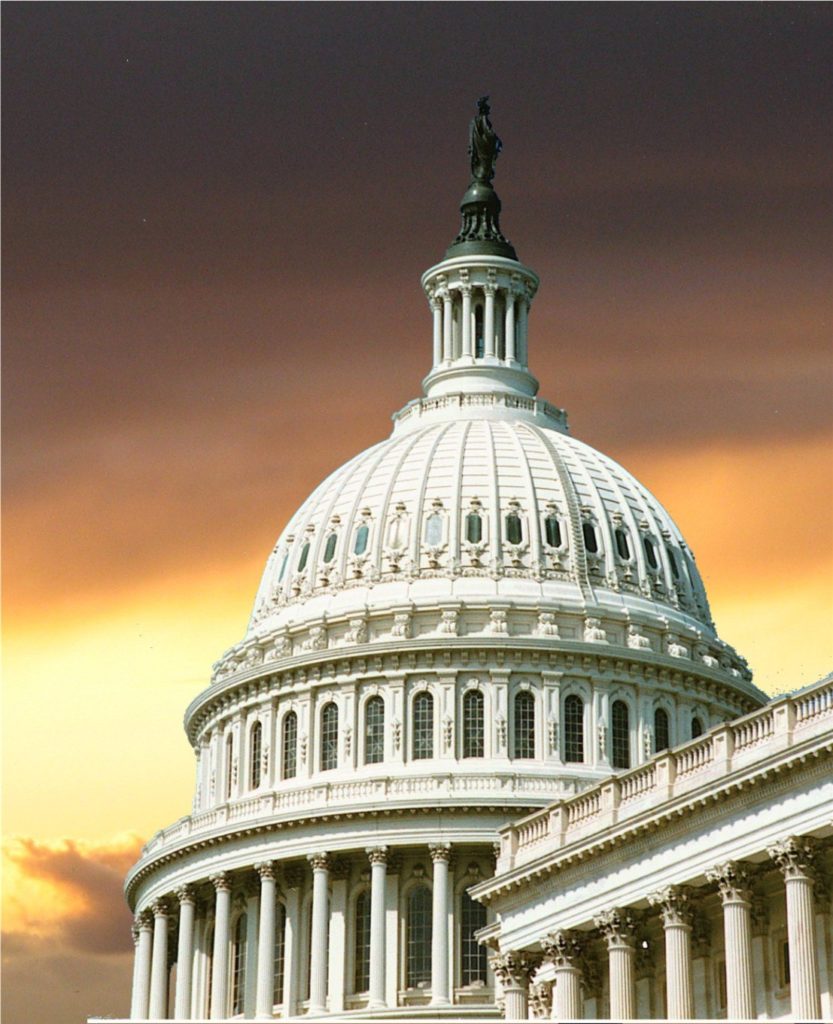 While discussions about Senate procedures sound esoteric, the truth is anything but – the basic functioning of our democracy is under assault by continued, partisan obstruction aided by abuse of the Senate’s rules.

Obstruction, especially in the form of the filibuster and the threat of the filibuster, is at an all-time high during the Obama presidency. This imperils our country’s ability to rise to the significant challenges of our time and has blocked progress on a host of issues that have majority support but failed to cross the 60-vote threshold in the Senate.

The notable political scientist Barbara Sinclair noted that in 1960s, threatened or actual filibusters affected only 8 percent of major legislation. By the 1980s, threatened or actual filibusters affected 27 percent of legislation. Between 2006 and 2010, that number has reached 70 percent. Unfortunately, and despite the so-called “gentlemen’s agreement” between Senate Majority Leader Harry Reid (D-NV) and Senate Minority Leader Mitch McConnell (R-KY), obstruction and gridlock remain dominant in the Senate. As Gregory Kroger, a University of Miami political scientist and filibuster expert, states, “The Senate has ceased to be a functioning organization.”

At the beginning of the 112th Congress, U.S. Senate Majority L eader Reid and Republican Leader Mitch McConnell (R-KY) announced a “gentlemen’s agreement” to break the procedural gridlock that kept the Senate tied in knots through most of 2010. A package of meaningful Senate reforms backed by reform-minded Senators Jeff Merkley (D-OR), Tom Udall (D-NM), and Tom Harkin (D-IA) and supported by the Fix the Senate Now coalition failed to achieve a majority, with one provision falling just two votes short of passage. However, we hoped that the modest steps away from obstruction outlined in the “gentleman’s agreement” would be honored. Unfortunately, the Senate quickly defaulted to its obstructionist tendencies. According to research by David Waldman of Congress Matters and Daily Kos, this current 112th Congress already has witnessed the third highest total of cloture motions ever filed. The only two sessions to see greater levels of obstruction were the immediately preceding 110th and 111th sessions. 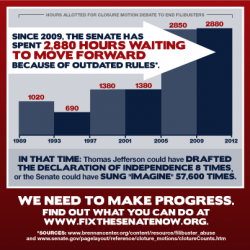 Senate Minority Leader Mitch McConnell (R-KY) infamously declared that his “single most important” goal was to make President Obama a “one-term president.” His playbook from the start of the Obama Administration was simple – to convince his caucus to obstruct anything and everything. As a result, to an extent unprecedented in American history, 60 votes became the needed threshold for nearly every order of Senate business. Republicans derailed energy and climate legislation, halted the DREAM Act, which passed the House while receiving 55 votes in the Senate, and blocked any debate on the Employee Free Choice Act, which passed the House with an overwhelming majority and garnered 59 supporters in the Senate. In July, the DISCLOSE Act – which would have increased transparency over independent groups’ campaign spending – failed to overcome a Republican filibuster and died, despite receiving support from 51 Senators and past support from many current Republican opponents. Also in July, Senate Republicans blocked the Bring Jobs Home Act, which would have encouraged in-sourcing by providing tax incentives to companies that bring jobs back to the United States from overseas. Separately from blocking substantive legislation, Republicans have used Senate rules to gum up even the most basic levers of governance.

The proposed Senate reforms would not eliminate the filibuster or limit the rights of the minority Party in the Senate. Despite the fear-mongering one hears about the goals of Senate rules reform, we are simply seeking a range of common-sense changes that add needed accountability and transparency to the legislative process. As Norman Ornstein and Thomas Mann suggested recently:

“Restoring the filibuster to its traditional role of allowing an intense minority to temporarily hold up action on issues of great national import — and away from its new use as a regular weapon for obstruction — should be a top priority.”

If the Republicans can change the rules to their advantage they will do it, no matter what Democrats may do this year. They have plenty of precedent to rely on already. In fact, the Senate has a longstanding tradition of adapting to new challenges by adopting new rules. Moreover, the suggested reforms do not seek to subvert the ability of the minority party to filibuster – merely to make the process more accountable, while cutting down on obstruction for obstruction’s sake. In anticipation of potential progressive reluctance to change the rules in case Republicans take over the Senate, Ed Kilgore, a blogger at Washington Monthly, stated:

“We’ll likely never have progressive governance in this country if every step is dependent on 60 votes in a Senate inherently controlled by small, and likely Red, States. If Republicans win the Trifecta in November, they will ruthlessly exploit existing rules to get their agenda enacted, and the theoretically awesome power of the Liberal Filibuster won’t matter. In the long run, breaking the power of the filibuster is unquestionably a progressive priority. And it will never, ever happen if it’s always a long-term proposition depending on short-term partisan advantages. Reid is right to finally break the mold and pledge to support it no matter what.”

When the next Congress convenes, it will only require a simple majority vote to move forward on a package of Senate reforms. Majority cloture at the start of a new Congress is not a new invention, and would establish no new precedent. Vice Presidents Nixon, Humphrey and Rockefeller have all issued favorable opinions from the Chair that a new Congress is free to invoke cloture by majority vote. Additionally, key distinctions need to be drawn between the 2005 push for a nuclear option and this effort to adapt Senate rules. The Constitution protects a new Senate’s right to adopt rules at the beginning of a Congress rather than acquiescing to rules adopted by a Senate in office 35 years earlier. The nuclear option called for ignoring rules after they had been used for six months and hence readopted by the new Congress.

At the start of this 112th Congress, the Communications Workers of America (CWA), Common Cause and the Sierra Club led a broad coalition of progressive organizations, dubbed Fix the Senate Now, to support the rules reform effort championed by Senators Merkley, Udall, and Harkin. Broad support for change took the form of more than 40,000 calls to Senate offices, more than 100,000 petitions signed and delivered to the Senate, and dozens of supportive editorials from national and state outlets. CWA is now leading renewed conversations about a new external coalition to back substantial Senate rules reforms for the 113th Congress.

The Senate Resolution 4 rules reform package would protect the voice and power of the minority, while expediting the consideration of legislation and nominations. The most significant reform is replacing the current “silent” filibuster with the “talking” filibuster, so that when the Senate votes for continued debate, there is a debate, but the period of debate ends when all comments are exhausted. This will increase accountability by making the filibuster a public exercise and discouraging frivolous filibusters.

We have a chance to restore the filibuster to its original purpose, but we need your help to do it. Click here to take action and contact your Senators today.

(This post first appeared on Labor’s Edge and is republished with permission.)