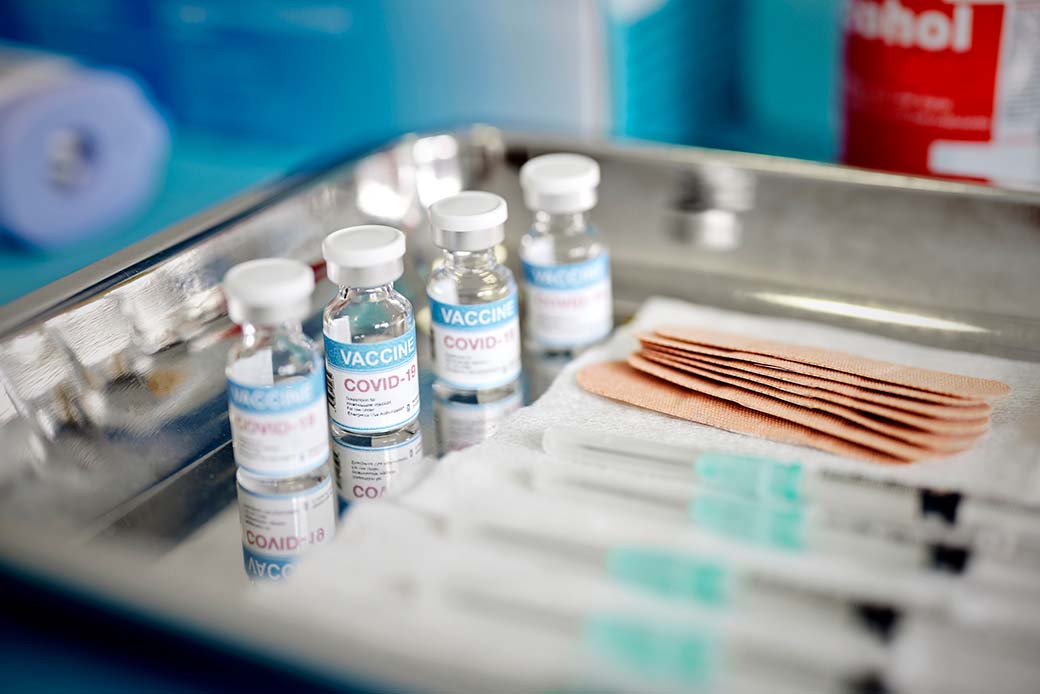 Situated about 11 miles west of downtown Los Angeles and five miles from Venice Beach, Culver City is something of an outlier in the COVID-19 public school conversation. Its vaccination rates, both overall and for those ages 12-17, are significantly higher than local or state averages. Its school district isn’t large; Culver City Unified totals roughly 7,100 students in grades K through 12. That’s about 1/90th the enrollment of the Los Angeles Unified School District.

Why, then, are so many people watching Culver City so closely?

The answer is multifaceted, like most everything else concerning schools, children, safety and the pandemic. But the short of it is this: Culver City has gone with a straight vaccine mandate for all of its 12- to 17-year-old students on campus. And other districts may well be watching, too, wondering how soon they can enact a similar policy.

That approach got a boost on Sunday, when Dr. Anthony Fauci, chief medical adviser to President Biden, endorsed it. “I believe that mandating vaccines for children to appear in school is a good idea,” Fauci said on CNN. But as always, the devil is in the details.

Across the U.S., child COVID cases are spiking dramatically. According to state data through Aug. 26 compiled by the American Academy of Pediatrics, the average number of children testing positive for the virus has increased fivefold in a month to nearly 204,000 a week. And most of that data was gathered before schools opened broadly around the country, which experts have repeatedly said will drive the totals higher.

Culver City Unified is believed to be the first in the state to tell students 12 and older that if they’re not vaccinated, they can’t be on campus.

But instead of meeting the challenge with coordinated plans designed to minimize the spread of disease, states are seeing wildly varying individual policies, many of them determined at the hyperlocal level of individual school boards and districts. Even California, which implemented a statewide mask mandate inside K-12 classrooms, ceded enforcement of that rule to local districts, some of which quickly announced they would not discipline students who defied it.

That’s a huge part of what makes the Culver City action so noteworthy. The district is believed to be the first in the state to tell students 12 and older that if they’re not vaccinated, they can’t be on campus. And with a vaccine for those ages 5-11 in the pipeline, it won’t be long until a much larger conversation can be had.

The district’s decision wasn’t particularly risky. Some 88.3% of Culver City’s eligible population has received at least one dose of the vaccine (versus 73.7% in Los Angeles County as a whole), and among those ages 12-17, the city’s figure drops only minimally, to 85.3%. The local teachers’ unions also strongly supported a vaccine mandate for students. On all sides, the buy-in was high — and Culver City doubled down by requiring that masks be worn both inside and outdoors on all campuses except the high school. It is conducting weekly COVID testing of all students as well, regardless of vaccination status.

“As we have all learned, we may need to change quickly to adapt to new information,” Superintendent Quoc Tran wrote in a letter to district families, “and we appreciate your understanding as we monitor and respond quickly to the latest health guidance.”

Now comes the waiting, and the documentation. Over the past 14 days, which basically covered the first two weeks of school, only two staff members and three students were found with active, confirmed cases of the virus. While it’s likely that the community’s high vaccination rates meant fewer kids started the school year with infection or exposure, those are still strikingly low totals.

Will other districts follow suit? In many parts of the state, vaccination rates are well lower than what’s found in Culver City, which might suggest less agreement on something like a vaccine mandate. A Kaiser Family Foundation poll released in early August found that 58% of parents nationally opposed mandatory vaccines at school for their 12- to 17-year-old children. (Perhaps unsurprisingly, that result split along party lines, with 66% of those who said they were Democrats supporting such a mandate and 87% of Republicans opposing it.)

Los Angeles Unified will test all students, staff and administrators for COVID every week regardless of their vaccination status. Those who decline to be tested can’t come to school.

But the task of keeping students safe is growing. Several districts in the Sacramento area have seen spikes in COVID rates, and East Nicolaus High School, in Sutter County, announced Aug. 24 that it would shut down its campus until Sept. 7 because of an outbreak among students and staff.

Los Angeles Unified, which lists its student population at more than 640,000, announced it will test all students, staff and administrators for COVID every week regardless of their vaccination status. Those who decline to be tested can’t come to school. But at some point, the notion of mandatory vaccines is also going to come into play — and, as Fauci notes, that’s hardly abnormal.

“This is not something new,” Fauci said. “We have mandates in many places in schools, particularly public schools…We’ve done this for decades and decades, requiring (vaccines for) polio, measles, mumps, rubella, hepatitis.”

A ruling in a recent Florida court case lends weight to the idea that local school districts are within their rights to safeguard students and staff. The ruling struck down an executive order by Gov. Ron DeSantis that banned districts from imposing their own mask mandates, with the judge at one point writing, “Schools can adopt policy dealing with health and education.”

No vaccine has been approved for children under 12, but those wheels are turning. Dr. Scott Gottlieb, the former director of the U.S. Food and Drug Administration and now a member of Pfizer’s board of directors, told CBS that Pfizer’s vaccine for those ages 5 to 11 should be ready for review sometime in September. Gottlieb suggested that FDA emergency use authorization is possible by “late fall, probably early winter.”

When that happens, Culver City officials say they are prepared to expand their vaccine requirement to include all those ages 5-17 — functionally, almost their entire K-12 enrollment. It is a policy that almost certainly wouldn’t fly in some parts of California and in many, many other areas of the country. But it is a conversation that is going to be forced.

As COVID Assistance Ends, a Nightmare Scenario Unfolds for Many Californians