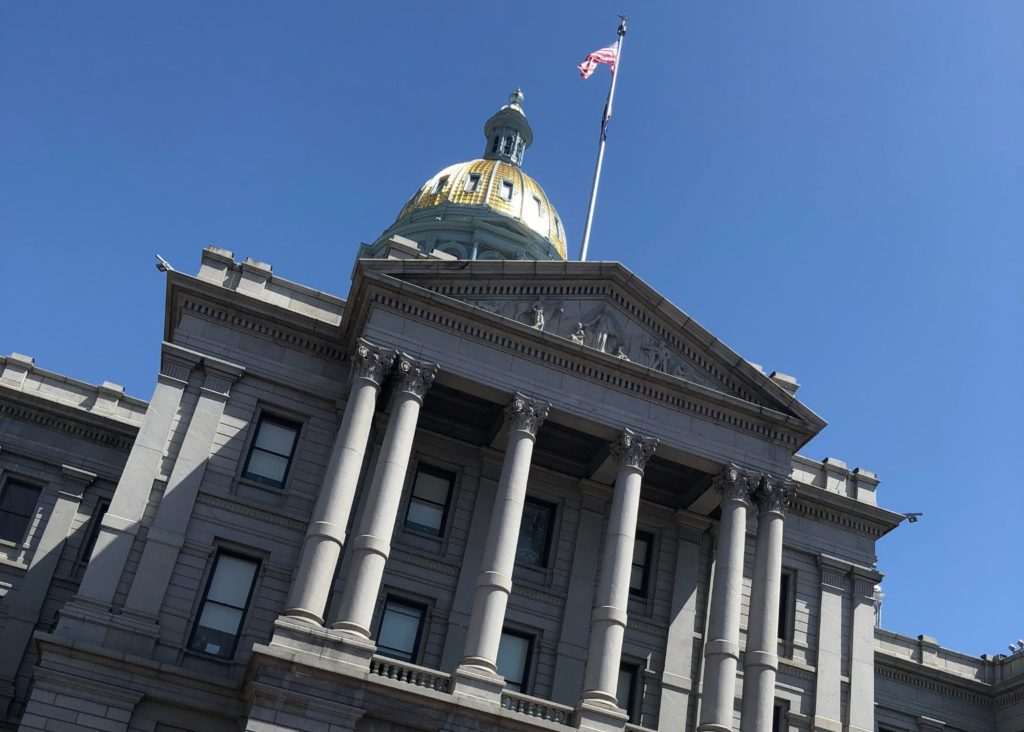 Did PERA pay $1 billion in fees to avoid the “political issue” of having to answer retirees’ uncomfortable questions about the ups and downs of the stock market?

Are taxpayers and retirees willing to give billions of dollars to financial firms in exchange for the potentially false perception of financial stability? As states move to slash the retirement benefits of teachers, firefighters, cops and other government workers, it is a question at the heart of an intensifying debate over high-risk, high-fee investments that enrich Wall Street money managers, but do not necessarily deliver the outsized returns they promise.

That debate has most recently surfaced in Colorado, where in the waning days of the legislative session, lawmakers are considering legislation to slash government workers’ retirement benefits, all while the Public Employees Retirement Association continues paying roughly $140 million in fees each year to outside money managers in private equity, real estate and other “alternative investments.” In a new Denver Post op-ed, PERA board chairman Tim O’Brien has called for “shared sacrifice among all parties” to fix PERA’s shortfalls. But to date, those calls do not include any demands to reduce those annual nine-figure PERA payouts to financial firms.

With PERA’s fees increasing and its returns lagging behind a low-fee stock index fund, some critics have asked why Colorado has not considered following other pension systems that have moved money out of alternatives and put more retirees’ money into far less expensive Vanguard-style funds that simply track the broader market. 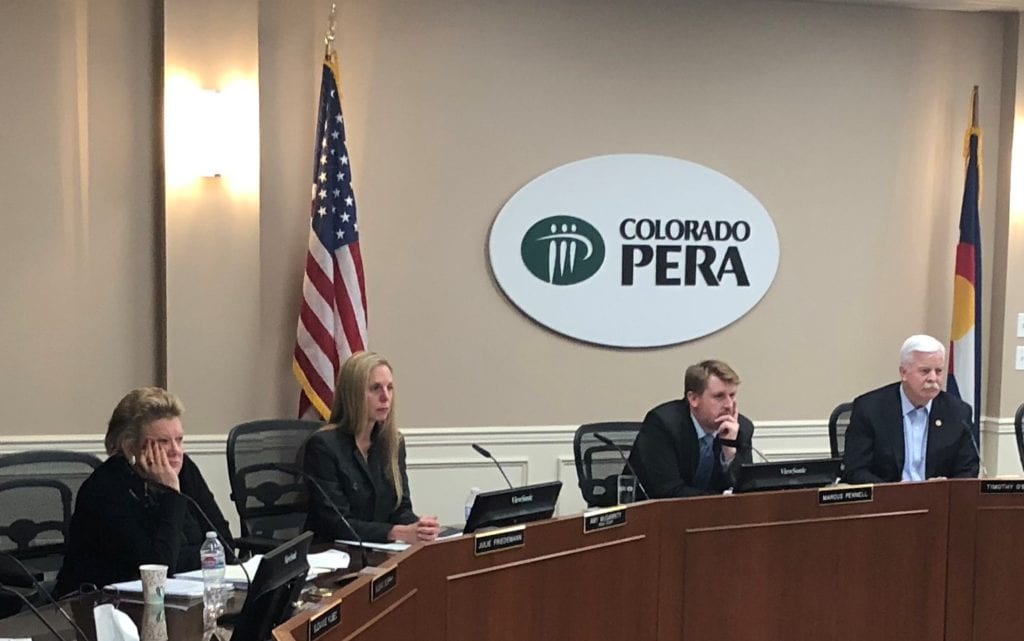 O’Brien, Denver’s city auditor, said being all-in on stocks would mean that “with all of our constituents, particularly the members, they will ask, ‘What happened to my money?’”

So did PERA pay $1 billion in fees between 2009 and 2016 primarily to avoid the “political issue” of having to answer retirees’ uncomfortable questions about the ups and downs of the stock market? And is that a wise expenditure at a time when the state is threatening to slash retirement benefits for government workers who don’t get Social Security?

Many financial experts say it is nearly impossible to beat the returns of the stock market over the long haul. And to critics, PERA failing to beat even Vanguard’s simple stock-and-bond fund seems to illustrate that truism. However, O’Brien’s comments allude to the fact that on a day-to-day basis, the market is notoriously volatile. At any given moment, the S&P 500 can be a veritable roller coaster.

Idaho Pension Fund Officer:
“It may be phony happiness, but we just want to think we are happy.”

Private equity and real estate, by contrast, are not priced day to day and can therefore seem less volatile. Such investments that appear to reduce year-to-year volatility may not actually deliver the best long-term returns for pensioners, but they can reduce the scrutiny and criticism pension officials could face because the investments appear to smooth pensions’ returns on a year-to-year basis.

In recent years, pension officials across the country have been increasingly frank about their willingness to use retirees’ money to pay huge fees for investments that may not beat low-fee stock index funds, but do seem to reduce politically problematic volatility.

Last year, for instance, Oregon’s chief investment officer John Skjervem acknowledged that officials there were becoming concerned that the state has been paying huge fees for a private equity portfolio that was not meeting benchmarks. In response, he said, “For a public plan, I could make a philosophical argument that even if we do nothing but match public market returns, there’s a place for private equity because of the appraisal-based accounting, which artificially smooths our total fund volatility. And there’s a genuine benefit to that.”

Similarly, Bob Maynard, the chief investment officer of Idaho’s public pension system, admitted in 2015 that when it comes to high-fee private equity investments, “we’re happy if it gives public market returns, anything extra, because of its effect having some smoothing of the risk as seen by the accountants and actuaries.”

“The smartest money manager isn’t smarter than the market.”

He added: “It may be phony happiness, but we just want to think we are happy.”

Even if you agree that pension officials should be shelling out big cash for less volatility, Maynard’s reference to “phony happiness” raises an even deeper question about whether, in fact, high-fee investments are less volatile in the first place.

Remember — while stocks and bonds are priced on a moment-to-moment basis, alternative investments are not valued by any kind of transparent market. They are long-term investments in assets like buildings or companies that do not have an easily discernible price until they are ultimately put up for sale. In the interim, they are given valuations by the investment firms. That is, they are valued by the very money managers who are trying to sell the promise of supposedly ultra-smooth returns to pension officials who just so happen to particularly value a lack of volatility.

Concerns about those potential conflicts of interest have of late been exacerbated by recent research challenging the entire premise that alternative investments are less volatile.

Johns Hopkins University researchers Jeff Hooke and Ken Yook created a stock index fund in a 2017 study, comprised of the kinds of companies typically bought by private equity firms. Despite the similarities of the investments, the data showed that private equity firms were self-reporting far less volatility in the values of their assets than the publicly traded stocks of similar companies.

“Unlike investment pools that specialize in publicly traded securities, buyout funds determine the residual values, one-year returns, and the volatility of their fund returns, while having few checks and balances,” the researchers wrote. They concluded that “buyout fund returns are more volatile than public equity market returns” and declared, “Future investors may have second thoughts about purchasing buyout funds instead of listed securities. Moreover, past buyout-fund investors may have been unfairly induced to place monies into these investment vehicles.”

The findings came on the heels of previous academic research suggesting that private equity firms inflate the self-reported valuations of assets when they are pitching new funds to prospective investors.

For their part, PERA officials defend their overall strategy, and board trustee Marcus Pennell says Colorado cannot just put its money into an index fund, even if it could lower fees and raise returns.

“There are more sophisticated issues than just simply returns over a 100-year time period,” said Pennell, a high school physics teacher in Jefferson County. “You’ve got cash flow issues; you’ve got to actually pay benefits. So putting 100 percent of the money into stocks and [letting] it sit there doesn’t generate the kind of cash flow that you need to pay benefits. It’s more sophisticated issues in terms of the month-by-month and year-to-year operations that don’t really allow you to go 100 percent stocks and forget about it for 100 years. So while in a vacuum that might sound like a good idea, when you delve down into the details of how the operation actually functions, that doesn’t become workable.’”

Public pension systems in Nevada and Montgomery County, Pennsylvania, though, don’t appear to be running into those problems. Those two systems famously reduced their investments in high-fee Wall Street firms, and increased their investments in stocks and bonds. In the first three years of Montgomery County’s move, its fund delivered five percent returns, which beat PERA’s return in the same time period. Same thing in Nevada. Over the last decade, that state’s pension system has outpaced PERA’s earnings.

“The volatility argument was put forward by all of the lobbyists and money managers who told me at the time that I was the dumbest guy in the world for doing this, but it seemed to me to be a hollow threat and it ended up not coming to fruition,” said Pennsylvania Attorney General Josh Shapiro, a Democrat who, as Montgomery County commissioner, initiated the shift into index funds. “We had no issues with liquidity, no issues paying benefits and no issues with volatility. These are all red herrings designed to protect the status quo and the money managers. The smartest money manager isn’t smarter than the market. What I mean by that is that there’s going to be ups and downs, but over the long haul — which is what a pension fund should be focused on — nobody will outperform the market.”