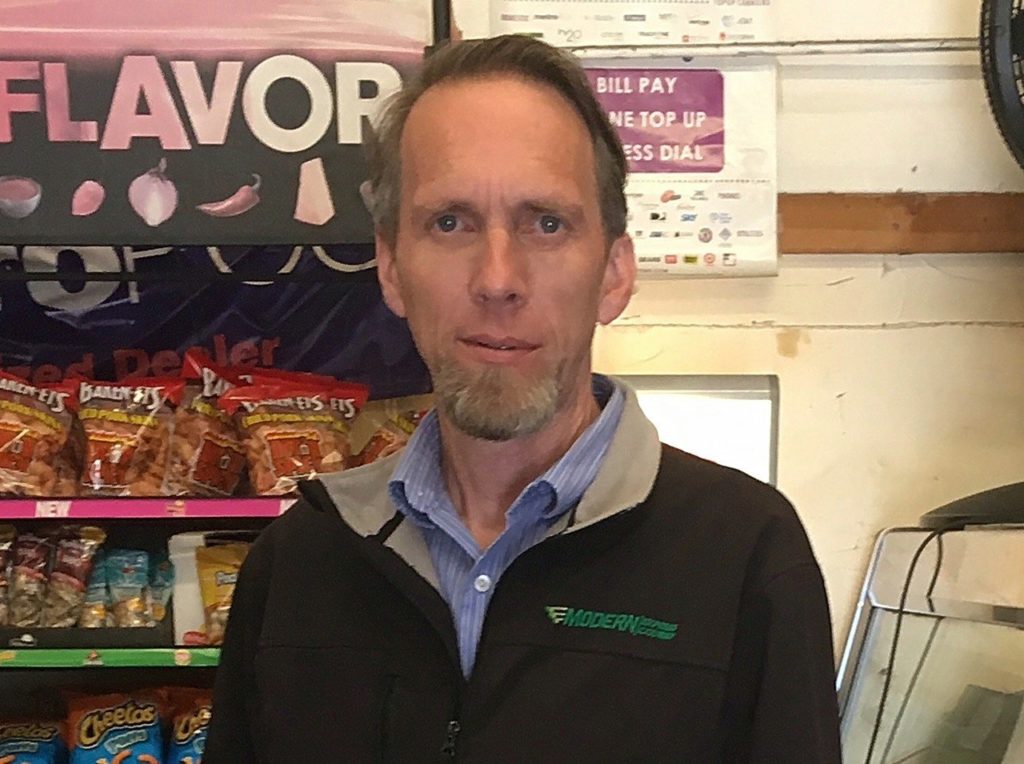 “I have a nostalgia for the golden age of Craigslist,” says Morgan Jones between sips at a coffee shop on Oakland’s Telegraph Avenue. Jones, who is tall and thin with a bushy goatee, lets out a faint sigh. For the 51 year old, the golden age occurred from the late 1990s to the mid-2000s, when someone like him—smart, but without a college degree—could land a decent job through the listings website. “I would show up to interviews willing to work hard, and I’d get hired,” he tells me.

Jones returned to his native Bay Area in 1999, after a decade in the Midwest. He found work at an architectural journal, which led to a communications position at a design firm and a salary in the mid-60Ks. Then came the financial crisis of 2008. The company laid off most of its communication staff; Jones was let go in 2010, two months after he learned that his partner was pregnant. He collected unemployment for the first time in his life, and used the downtime to paint their house and focus on his baby daughter. Jones had always worked, and he figured he’d get a new job soon enough. But the recession dragged on, and companies weren’t building like they had before. Months went by without an offer. It also dawned on him that he was quite a bit older than the other job applicants.

“I’m figuring out that the market has changed, that the elbows have gotten sharper, and I’m starting to wonder where I have failed,” he tells me. He was hired for two short-term jobs, but other than that, spent most of his time sending resumes and waiting to hear back. Late in 2015, while returning from a job interview, he saw an ad for a courier service in Oakland. It didn’t pay much above the minimum wage, but Jones was desperate, so he applied to be a driver. He didn’t mind the work, calling it “disorganized but fun,” though he was laid off several months later, after the company lost a contract.

That’s when he saw a posting on Craigslist for Rev, an online transcription and caption writing service company. It seemed ideal. Jones could work from home, choose assignments that interested him—like a documentary about a mining disaster in Canada—and set his own schedule. Best of all, as an independent contractor, he wouldn’t have a boss. Jones, who can type 60 words a minute, figured he’d make around $25 an hour.

A month later, having written captions for the Rachael Ray Show and various MTV programs, he calculated his earnings. They came to roughly $5 an hour. On the best assignments, the rate could rise to $7—still 40 percent less than Oakland’s minimum wage. He was his own boss, but the work he was doing, he said, felt “close to volunteerism.” With such low wages, it was no longer possible to avoid the fact that, as he settled deeper into middle age, he was “falling out of the middle class.”

Jones, of course, isn’t alone. During the last several years, stories about the rapid growth of the gig economy have saturated the media, often focusing on behemoths like Uber. These contractor jobs are different than those of a traditional employee, providing no guarantees of a minimum wage or benefits like unemployment insurance or workers compensation. But if we zoom out from Jones, how much do we actually know about this workforce? Are their ranks growing? Is our country undergoing a revolution in how we work?

To try and find out, researchers at the University of California, Berkeley Labor Center published a report last month called What Do We Know About Gig Work in California? They sifted through government statistics and recent industry studies, and came away with many more questions than answers.

“For a group of workers that is seen as the archetype of the 21st century economy,” they write, “what we don’t know about independent contractors far exceeds what we do know.”

Consider that most basic of questions, the size of the gig workforce. Estimates of the number of independent contractors in the U.S. range widely, from 600,000 to 55 million. Part of the challenge has to do with differing definitions. Some datasets focus on those who earn the majority of their money as freelancers. Other surveys consider a gig worker to be someone who has earned any amount of money as an independent contractor—for example, a schoolteacher who also sold $300 worth of jewelry on Etsy last year.

A related question is whether the ranks of full-time independent contractors have grown, or whether more people are simply supplementing their regular jobs with small gigs. (Another option is that both are true.) The data here isn’t conclusive, though there are indications that—despite numerous articles to the contrary—the number of full-time gig workers has remained relatively steady in recent years. Last year, according to the Census Bureau, these independent contractors made up 6.3 percent of the workforce. So one hypothesis is that any rise in gig workers is due to traditional employees taking on extra work.

“There’s an important question here of whether gig work is the way people are making up for low wages at their W-2 jobs,” says Sarah Thomason, a co-author of the study. “In other words, is gig work becoming the new safety net? And what does that say about our public programs meant to play that role?”

The report, while national in scope, pays special attention to California, the fount of much of the excitement—and anxiety—about the gig economy. In California, the study finds, independent contractors are more likely to be like Jones: white, male, 50 years or older, and with some college under their belt. (Jones attended but didn’t graduate from Antioch College.) An estimated one in five, like Jones, don’t have health insurance, twice the rate of traditional employees. Data on income, due to underreporting, is notoriously unreliable; the report puts typical wages anywhere from $24,000 to $66,667.

That California’s gig workers skew older might be surprising to those who associate the industry with Millennials. But perhaps the most counterintuitive finding in the report is that on-demand platform jobs—think Uber and TaskRabbit—represent just 0.5 percent of the workforce. That number is a bit higher in select California cities like San Francisco, which tops the list at 1.2 percent. Yet even in the Bay Area, the growth of such jobs has been slowing dramatically.

“We’ve reached the point of diminishing returns in running the gig economy discussion through the lens of Uber,” says Annette Bernhardt, a co-author of the report who directs the Labor Center’s Low Wage Work Program. “Policymakers need to understand that this is a much more diverse workforce.”

From the beginning, one of the challenges to understanding the gig economy has been to see past its triumphalism. “The sharing economy isn’t an app, it’s a mindset based on trust and cooperation,” wrote Sara Horowitz, the founder of the Freelancers Union. Way back in 2001, Daniel Pink penned Free Agent Nation: The Future of Working for Yourself. “Free agents are the marketing consultant down the street, the home-based ‘mompreneur,’ the footloose technology contractor,” he proclaimed. The book promised that we were about to enter an “exhilarating new world.” On the back cover, in capitalized red font, Pink listed three characteristics of the coming employment revolution: FULFILLMENT, FREEDOM, and TIME.

For Jones, it has often felt like the opposite. He recently worked at Instacart for several months, loading up shopping carts for well-heeled customers at a Whole Foods in San Francisco. You’ve been to a grocery store. Now imagine spending eight hours of your day walking the aisles and picking out products for people you’ll never meet: fulfillment isn’t the first word that comes to mind. For another gig, Jones delivered packages for an Amazon subcontractor, using a vehicle that was monitored in real time by supervisors. So much for freedom. And time? At $5 an hour at the transcription job, he’d need to work 100 hours a week to clear $2,000 a month. That’s not even enough to rent a typical one-bedroom apartment in Oakland.

Jones is relatively fortunate. His partner is an arts instructor with a steady income, and she purchased their modest house long before the Oakland housing market boomed. But his search for stable work continues. He still has an active account with Rev, the transcription service company, and each day wakes up to scan a number of job sites. Recently, he applied for a position as a gas station attendant at Chevron.

“It’s not the kind of job I would have looked at before,” he says. “But now, having done my share of jobs in the sharing economy, being a gas station cashier looks very attractive.”