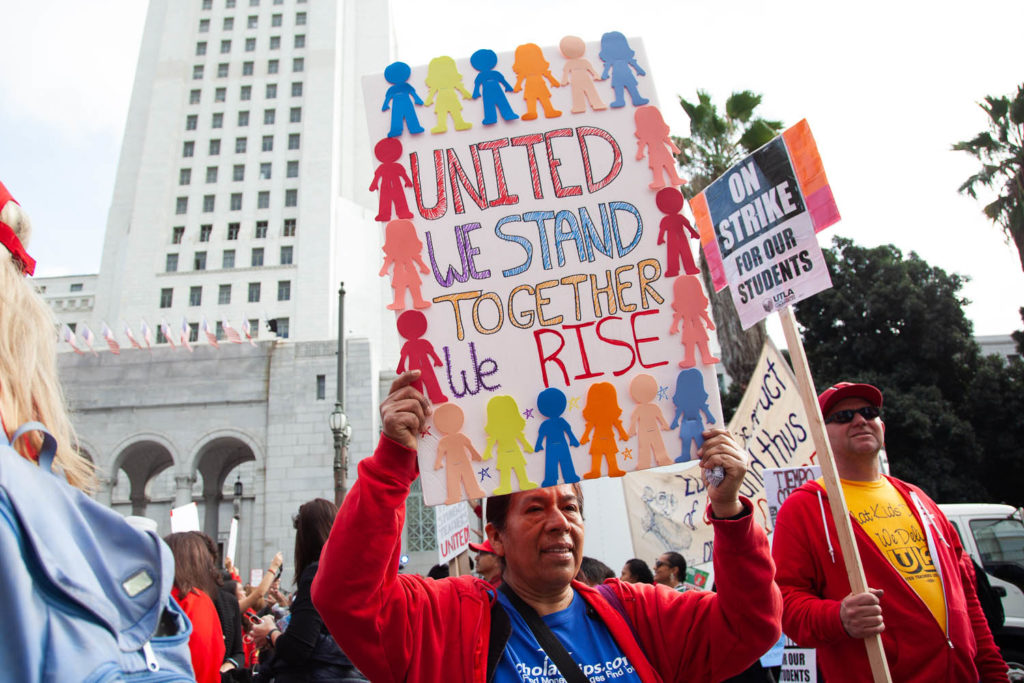 Garcetti, who last Thursday locked the two sides into a City Hall room and, for the next five days, personally mediated the negotiations, called the agreement “historic.”

“You have to be fiscally responsive but you also, as the saying goes, sometimes have to make sure that your reach exceeds your grasp,” the mayor told the hastily assembled room of reporters and negotiating team members.

Both Beutner and Caputo-Pearl took up Garcetti’s historic significance theme, as each underscored what they considered their respective wins and emphasized the need to reverse the 40 years of disinvestment in California public schools triggered by the passage of Proposition 13 in 1978.

“That issue does not go away now that we have a contract,” Beutner noted. “The importance of this moment is public education is now the topic in every household in our community. Let’s capitalize on this. Let’s fix it.”

The real winner in the room was Caputo-Pearl, who cited district concessions on class-size reduction and on hiring more nurses, librarians and counselors as the biggest wins for the union, for LAUSD families and for the district itself. Over the last four years he had virtually rebuilt UTLA from the bottom up and forged new alliances with students, parents and the district’s Latino communities. By positioning the strike as a continuation of last year’s “red state teacher’s rebellion” and moving beyond salary issues, the union leader also succeeded in making the strike a national symbol for the threats posed to American public education.

“So this is much more than a narrow labor agreement,” Caputo-Pearl emphasized. “It’s a very broad compact around things that get at social justice, educational justice and racial justice.”

Perhaps the most remarkable, albeit symbolic win by UTLA negotiators, was to persuade Beutner to put a resolution for a charter school cap to a vote at the next LAUSD school board meeting. Although the resolution will certainly be voted down by the board’s pro-charter majority, for a superintendent who, only a month ago, had dismissed charter controversies as a “shiny distraction,” and who has been working behind the scenes on a plan that would accelerate charter growth through his “Re-Imagine LAUSD” plan, the concession’s symbolism is striking.

“We talked about charter schools and the importance of investing in existing schools, and really having accountability and regulation on charter schools, which is a part of this broader agreement,” Caputo-Pearl affirmed.

Afterwards, the UTLA president credited the contract breakthrough to the solidarity of the rank and file, as well as to assurances from Governor Gavin Newsom that LAUSD could expect further help from Sacramento. Those pledges included backing a union bill that would bring in more money by adjusting administrative ratios. And the governor has also agreed to statewide action on community schooling and to earmark more state funding for special education.

Newsom has already acted on at least another assurance to the union. On day one of the strike, he told reporters that he wants to see legislation on charter school transparency and accountability during this session. “I’m going to be advancing with a sense of urgency,” he vowed.

The deal immediately went before a closed session of the LAUSD school board and will get a formal vote next week. UTLA’s rank and file voted their approval on Tuesday night by what Caputo-Pearl described as a “vast supermajority.”

“What we were able to win in this agreement,” added Caputo-Pearl after the vote, “is a testament to you, our members, and you making a sacrifice by going on strike in order to improve the public education system for our students, our families and our communities.”

Los Angeles’ Schools Strike Was a Teachable Moment for Students