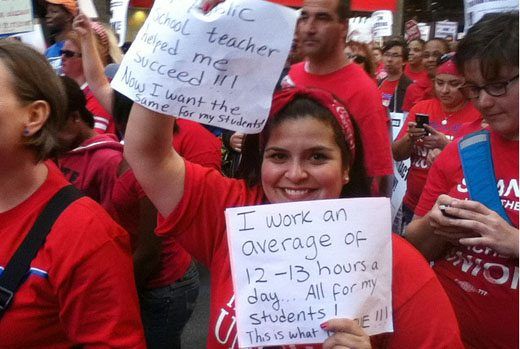 For the teachers, pay has been the least sticky issue in bargaining, with the district and the union not that far apart on salary increases. Far more important have been issues around how to assess whether a given teacher is successful, and how that should impact a teacher’s job or salary. For the teachers, this issue encompasses fairness to them in their job stability, as well as fairness to students in having lower teacher turnover. The teachers have also been pushing for much-needed basics for students — a desk and book for every student, a school nurse and guidance counselor at each school, and air-conditioning for the 90+ degree days that strike Chicago often.

Mayor Rahm Emanuel has called the strike one of choice, casting the teachers as more concerned with their own well-being than that of the students’, and every conservative commentator on TV and in the news that has discussed the strike has echoed this sentiment. The consensus among right-wingers seems to be that if the teachers cared about their students they would be in the classrooms teaching them — period.

But studies have shown that if there is a negative impact on students’ education caused by strikes, it is negligible. And in this age of experiential and experimental learning, it is shocking that no one has made the case for the strike’s possible positive impact on students: In exchange for what will likely be one week of missed class time, 350,000 Chicago students are getting a lesson on issues critical to our democracy.

Yana Kunichoff, a Chicago-based reporter for Truthout, has witnessed students all over the city showing support for their teachers by standing on picket lines, making signs, or bringing the teachers snacks. One high school student told AP reporters, “I just feel that the teachers should stand up for themselves. They’ve had my back for 13 years. I’ve been at CPS [Chicago Public Schools] for 13 years. I just feel it’s my turn to support them.”

Other students have similarly expressed this message of solidarity and the importance of collective action. Hector Rivera, a 17-year old senior, said,

“We have to support them in everything that they are doing because it’s going to benefit us at the end of the day… People should look at this as taking a stand for something that’s right. As a person, as a student, as a teacher. Even as a parent.” Another 17-year old senior, Heidy Rivera (no relationship to Hector) expressed her understanding of why this strike is important for teachers to have a voice in the workplace, saying, “If we want something, we should be able to say our opinion and make changes.”

Kunichoff emphasized that what she has seen the students learning from the strike is “that after years of going to board meetings and making public statements about closings and lack of resources, [the teachers] get noticed and they get media attention when they make noise like the protests going on right now.”

Chicago students are experiencing first-hand how workers can band together and demand a voice in the workplace. This is civic engagement at its best, at a time when too many Americans feel powerless in the workplace and at the ballot box. With the rise of extreme individualism (evidenced most recently at the [Republican] Convention two weeks ago) and a decades-long decrease in union membership, most Americans will never get to experience the power of collective action. Chicago students are witnessing — and participating in it — now.

This week in Chicago, students are experiencing a real teachable moment. They are seeing what it means for workers to risk their incomes and their stability to help one another; that when individuals assert themselves collectively, their voices are heard; that they have a right to have a say in the terms and conditions of their employment; and that an essential element of the democratic process is not at the ballot box. For many Chicago students, it may turn out that the week they missed school was the most instructive of the year.

Moshe Z. Marvit, an employment discrimination and labor attorney, co-authored Why Labor Organizing Should Be a Civil Right: Rebuilding a Middle-Class Democracy by Enhancing Worker Voice. His post first appeared on Unionosity and is republished here with permission.