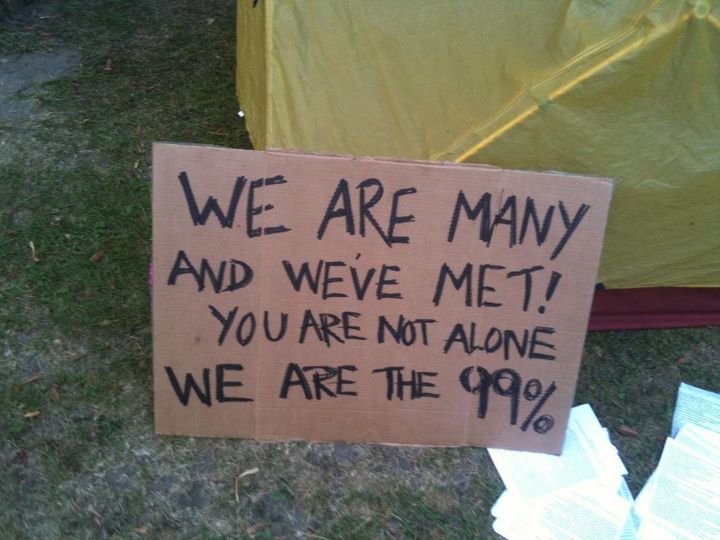 After visiting a few times, I decided to go for broke and join the occupation to see it all first hand. It was very interesting to entertain the misconceptions people might have about this movement. Some may think it’s populated by arrogant 20-somethings looking for attention and a party atmosphere with leftovers from Burning Man and Coachella attendees. Some may think it’s a few leftist apologists and homeless people intermingling uncomfortably. Some may think it’s a breeding ground for anti-American anarchists and communists plotting the takedown of our infrastructure. Others think it’s just a passing fad like pointy shoes and Bedazzler jackets.

I had some of these misconceptions myself. I didn’t know what to expect, but I had to reject these doubts before I could really see what was taking place. I visited during a Demands Committee meeting and the General Assembly, the nightly gathering for decision-making, to get a better reading of what was taking place. This didn’t feel like a casual uprising of people looking for a party.

This didn’t feel like that at all. I immediately felt like I was transported to ancient Greece, wearing sandals and robes, talking with people with different ideologies and outlooks. We took part in similar actions to those of ancient Greece… we had an intellectual revolution brought out of hunger and poverty. We had people occupying the public square, discussing politics and experimenting with alternative ways of government. What I really like is the fact that everyone here is engaging everyone else, in groups or one on one.

I remember the first night a friend and I started to try and put up my massive eight man tent. This tent was from back in my days when I was making over $100,000 a year, buying crap that I didn’t need in a desire to feel good about myself. I appreciated this irony as I tried to decipher the directions for my massive tent. In about ten seconds, someone stepped in and offered to help. Five people, people I’d never met, joined in. Before I knew it there was a little committee of strangers there to help me get my tent up. After getting it up, they disappeared to find other things to do, people to help.

People make eye contact. People talk. People listen. This is where great ideas are born. Where people put aside their arrogance and allow others to speak on their issues. It’s not a place where people tell you what you need to believe, or what the movement is about. It’s far beyond that now. It’s shapeless, formless, leaderless, and functionless. This, however, is not a bad thing.

The next morning I woke up early, far too full of feelings of what I could do to help this movement, how I could be a bigger part of identifying problems and solutions. I watched the beautiful collection of tents and sleeping bags covered in morning fog. I sat there trying to understand what this occupation could mean to me… to my country… to the world? What it is could be anyone’s guess, but one sign an occupier made really stuck with me. “We are many and we’ve met! You are not alone. We are the 99%.”

That sign inspired me to write. Whatever your particular complaint, beyond economic…whatever it is you’d like to change in this world – be it averting climate catastrophe, reversing animal cruelty on every level, increasing education and access, promoting equality on gender, race, sexual orientation, or any other thing you’d like to change in this world – here is a fertile ground where you can plant your seed.

Come and join the occupation. Interact with anyone you encounter. Spread your message.

You are not alone.

When Lawrence isn’t volunteering for various environmental and animal rights organizations, he runs a green landscape architecture firm called Ashcrow Landscape Design. When he’s not donating his professional time with various non-profits such as schools and shelters (both animal and human), he loves to dabble in his passion for vegan cooking.

Signs of the TImes