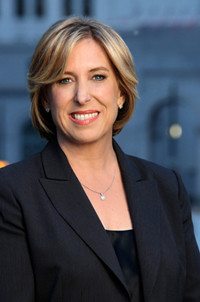 Today we continue our series of interviews with Los Angeles’ front-running mayoral candidates, with the first part of a talk with City Controller Wendy Greuel, who has previously served as an L.A. City Councilmember. (Tomorrow: Wendy Greuel interview, Part Two. See interviews with Eric Garcetti, Part One and Part Two.)

Frying Pan News: If your opponents are capable and honorable people, why are you running for mayor – why not just sit back and let one of them take the office?

Wendy Greuel: I have the unique experiences that none of the other candidates have. I’ve worked for Tom Bradley, one of the greatest mayors we’ve had in Los Angeles. On the federal level I worked with Henry Cisneros at the Department of Housing and Urban Development – not only on national homeless programs but [by] being here after the Northridge earthquake. I coordinated, under a crisis situation, funds to build desperately needed housing in Los Angeles.

And I worked in an iconic industry like the entertainment industry – for DreamWorks movie studios. I own a small business – a building supply company – and, as controller, I am the fiscal watchdog. Those experiences have shaped what kind of elected official I am and what kind of mayor I will be. The kind who rolls up her sleeves, the kind of person who deals with the vision but, [just] as importantly, makes sure that we deal with constituent and quality-of-life issues in our neighborhoods and communities.

FPN: Public hostility toward government and its representatives is at an all-time high. How would you draw in Angelenos to the process of participatory democracy?

WG: They’re frustrated because they feel they have no control – that no one’s listening. They call 911 and the Fire Department that doesn’t have the resources to be as quick as necessary. They call to get their streets repaired and they can’t get a response. They see there’s wasteful spending. I’ve identified $160 million of waste, fraud and abuse. That’s some money we’ll never get back. But if we don’t change our evil ways, we’ll never see that money in the future for the kind of services we need.

What I’d do as mayor is what I’ve done in all my jobs: engage the stakeholders, encourage them to participate in solving their problems. I had office hours when I was a councilmember. I’d go out and talk to people when I released my audits or my ideas for audits. I learned from Tom Bradley, who had constituent days when people could just come to his office and have a conversation with him.

FPN: Would you make the creation of good jobs the centerpiece of your administration?

WG: It’s something I’ve talked about every day. I will be the jobs tsar. I will be the person in the city that is going to go out and talk to businesses and encourage them to move to the city of Los Angeles and to grow. And work with them – whether it be to simplify a system that you have to go through in Los Angeles, which is cumbersome, [or] providing incentives for the jobs we want to keep here or providing workforce training to train the workforce of the future and retrain some of those whose industries no longer exist.

It’s critically important as we go forward that all of those pieces get put together to create jobs in L.A. It’s going to be an everyday activity of mine as mayor of Los Angeles.

FPN: What will you do as mayor to address the city’s historically high levels of poverty and economic inequality?

WG: As we try to bring back the middle class, as we try to address the issues of poverty and hunger in Los Angeles, it gets down to creating an environment where people can work at family-wage jobs. We definitely have haves and have-nots in Los Angeles today. Poverty and homelessness are growing. First and foremost is job creation, also education. We can’t have a world-class economy without a world-class educational system. And today the zip code you live in determines what kind of education you’re going to get in Los Angeles. To me that’s not a fair distribution of resources. For me it is about job creation – retaining the jobs we have, recruiting new positions. Keeping the young people who graduate from our colleges here in Los Angeles. We [must] create manufacturing and green tech opportunities, and build our infrastructure [while] keeping our entertainment industry here. We have an opportunity to have a seamless transportation system that creates jobs – that’s a win-win for us in dealing with traffic.

FPN: Is there a place in this campaign for a more visionary debate about our future besides discussing cuts in the budget and city employee pensions?

WG: I’ve talked about creating a more business-friendly environment, about creating an education system that has the resources it needs. It’s not only about dealing with what’s happening today – dealing with how to be more efficient and doing more with less. But it’s also talking about planning for that future. It’s planning to advocate on the state level for the funding they owe us for education opportunities. We’re going to help create economic development, whether it be along the Crenshaw Corridor, in East L.A. or the West San Fernando Valley.

FPN: What is the role of government in addressing the inequities of the free market system?

WG: Government can be a leveraging point for a community, it can be that initial funding to get a project going, [it] can be a public-private partnership. Government can use our community development block grant dollars and previous redevelopment dollars to encourage job creation in communities that have not seen that job creation. I believe government has a role in encouraging that kind of economic development – whether it be in our transportation system or our economic dollars. We have to be sure that everyone has the same kind of access to the kinds of jobs we’re creating in Los Angeles.

FPN: Research has shown an unambiguous link between the strength of unions and the strength of a community’s standard of living. However, unions have become political piñatas, especially in the debate over funding for public employee pensions. Will you use the mayor’s bully pulpit to promote the role of unions in creating a fair economy?

WG: Absolutely. I’m proud to now have, [as of today,] 19 different labor unions endorse me. Unions have said, “Wendy’s going to be a fighter and a champion for us.” But I also have business groups who have endorsed me. Both communities know I’m fighting for good family-wage jobs and to make sure we’re not demonizing our workers. We’ll work in boardrooms across Los Angeles to say, “How do we make sure everyone has a good pension system and good health care and good-paying jobs, so that they can afford to buy a home and ensure their kids get a good education? “I think too many people have demonized city workers yet so many are doing great jobs.

FPN: Our current mayor is regarded as a progressive, but much of the last two years has focused on cutting the benefits of workers. How will you govern differently and stay true to your progressive values?

WG: I always say process is as important as product, no matter what issue you’re dealing with. The frustration that has occurred with the mayor and the council during the last couple of years is the roller coaster ride that they’ve gone on – instead of the partnership that labor has wanted to see. The cycle of crises and layoffs and furloughs is not a way to run a government. Do we have to have shared sacrifice when times are tough? Absolutely, but what that means is that you’re going to have an honest dialogue and negotiate in good faith. I will govern as someone transparent and accountable. That’s why I’ve gotten support from both labor and business.

FPN: L.A. City Administrative Officer Miguel Santana has become a controversial figure – critics say he is targeting workers. What do you think of his performance and will you keep him on?

WG: I have stayed away from saying who I would hire or fire. It’s not a good way to run a campaign or to be a CEO of a company – in this instance the CEO of the city of Los Angeles. I would be responsible as the mayor of Los Angeles for my employees and the positions that come out of my office. I’ve worked with Miguel Santana. Have we agreed on everything? Absolutely not. Will I make sure labor and business leaders have a place at the table for discussions with him? Absolutely. I’m not going to play good cop/bad cop. I’m ultimately responsible for the heads of the various departments and I’m going to hold them to a high standard and let them understand what my vision is, and how I’m going to lead. And if they’re on that team and get where I’m going then they’ll be on that train with me. If not, jump off!