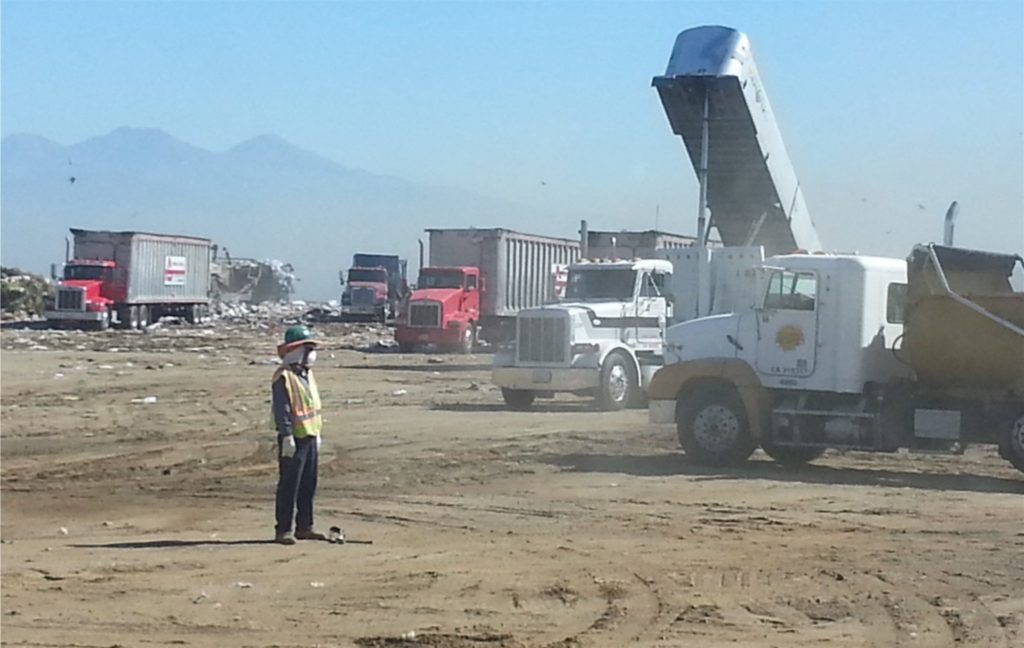 You may have seen Puente Hills while driving the 60 Freeway east of Los Angeles. It looks like a 700-acre, 450-foot-high, tree-covered mountain. However, only a few small hills were there when the facility opened in 1957. The mountain itself is made from seven decades of Southern California’s waste.

Puente Hills Landfill accepted its final truckloads of waste yesterday. Today, what was the country’s largest landfill is closed – a milestone in the environmental history of Southern California and the country.

Puente Hills had been taking in a third of the waste of Los Angeles County, as much as 13,000 tons per day at its recent peak. While some workers will remain for the next year-plus, putting a final cover on the site, hundreds of trucks that used to dump there every day will be headed elsewhere. Don’t Waste LA and others concerned for our environment and communities are working to make sure those trucks eventually head somewhere other than the next landfill on a new hillside.

We don’t need to make mountains out of trash anymore.

We have the technology and the ability to redesign our waste system and develop a recycling economy that minimizes pollution and creates good jobs. If Southern Californians decide we have the will, a zero waste system is within reach.

In Los Angeles, many businesses and residents in apartment buildings don’t even have access to reliable recycling. We’re excited that, thanks in part to the work of our coalition, the City of L.A. is now addressing the problem by moving forward with an exclusive franchise system for waste hauling. The new system will bring recycling and efficient service to those who currently lack it. It’s a giant leap in the right direction.

“In Los Angeles, we’re already recycling 70 percent of waste in single family residences, and now we’re putting in place policies to bring recycling at our businesses and apartment buildings to that level too,” says Los Angeles City Councilmember Joe Buscaino of the new system. He sits on the Board of the Sanitation Districts of L.A. County, which run the Puente Hills Landfill.

“I want to recognize the amazing work that has been carried out at Puente Hills for the past six decades. They developed many of the practices that minimize the impact of landfills,” continues Councilmember Buscaino. “But now it’s time to move towards a better system that maximizes recycling and diverts waste away from landfills altogether.”

While it may be true that Puente Hills was a model and created a number of innovations to reduce its impacts, there is really no such thing as an environmentally sound landfill.

“The Puente Hills landfill was one of the largest destinations for organic waste,” explains George Watland of the Sierra Club Angeles Chapter, a Don’t Waste LA partner. “In 2011, approximately 250,000 tons of food scraps and over 270,000 tons of separated yard trimmings were dumped there. Even in the best-run landfill, the methane released to the atmosphere and the toxic water leached into groundwater and streams from that level of organic waste will impact our environment for decades.”

There is still work to be done in order to wean ourselves off of landfills for good, but the closure of Puente Hills represents an important step.

“Today, we are celebrating a turning point in California’s trash management,” emphasizes Linda Escalante, a policy advocate, with the Natural Resources Defense Council, another Don’t Waste LA partner. “Instead of building mountains of trash and creating local health problems, Los Angeles has adopted a zero waste policy to ensure places like Puente Hills never have to exist in the first place. We’re investing in the future of waste management, while also creating local jobs and spurring our regional economy. The closure of Puente Hills is good for our health, our economy and our pocketbooks.”