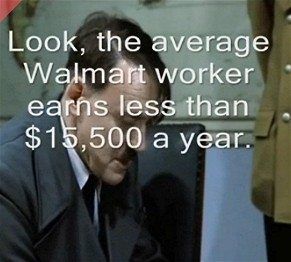 Last week we posted a video here on Frying Pan News, and apparently there’s some outrage. It seems some of our friends at Walmart felt we were comparing them to Hitler, and saw that as horribly unfair.

We can understand why they are a bit behind the times on this one. After all, the Hitler parody meme has only been around for five or six years, and written about in The New York Times as far back as 2008.

For their reference, however, we suggest they check out a few other videos.

There is, for example, a hurtful attack on grammarians. Representative Joe Wilson comes in for some very unfair treatment, mocked mercilessly for shouting “You Lie” during a State of the Union speech. Then there’s a talking cat (also an internet meme, in case you’re curious, folks), called out as a drunk. Even cultural icon Beyonce and alt-rocker Thom Yorke cannot escape (and if you’re curious why, check out this, which is itself an Internet meme).

In short, friends of Walmart, please stop with your fake outrage. Nobody thinks Walmart is the same as Nazis – just a company undermining the well-being of thousands of communities around the world.