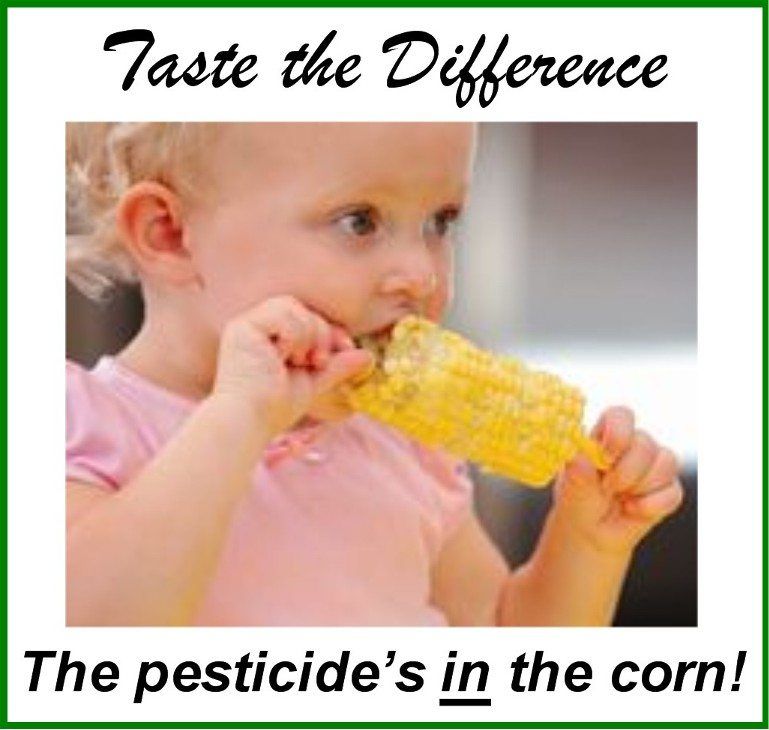 As the summer winds down, family barbeques are in full swing and supermarkets are filled with shoppers searching for the right foods to grill up with friends and neighbors.

But do they really know what they’re buying? What they may not know is that Walmart has admitted it will soon start selling agrichemical giant Monsanto’s sweet corn, which has been genetically engineered with an insecticide inside it — not on the corn, but IN it.

Bt toxin works as an insecticide by disintegrating the lining of insects’ stomachs when they chomp on the corn.  So what is this doing to the bodies of adults or children who eat the corn? We don’t know.

The genetically engineered sweet corn, which has also been manipulated at the DNA level to withstand pesticides that are sprayed on it, has never been proven safe. The US Food and Drug Administration require no safety testing of genetically engineered foods.  No long-term health studies have been conducted, and no labeling will be provided to alert unsuspecting consumers exactly what they are eating.

Yet there are studies showing there is reason for concern.  For example, a 2009 study in the International Journal of Biological Sciences linked Monsanto’s genetically modified corn to kidney and liver damage in rats.

What are the health effects of these toxins on babies and children?  No one really knows.

What then should we make of a recent statement by a Walmart spokesperson who told the Chicago Tribune he sees “no scientifically valid reason” not to sell this corn? A convenient non-answer in light of the fact the U.S. doesn’t require such safety studies.

Walmart’s statement is even less reassuring when you consider this classic quote from Phil Angell, then Monsanto’s director of corporate communications, who in 1998 told Michael Pollan: ”Monsanto should not have to vouchsafe the safety of biotech food. Our interest is in selling as much of it as possible. Assuring its safety is the FDA’s job.”

Meanwhile, the FDA has said, “Ultimately, it is the food producer who is responsible for assuring safety.”

If the companies don’t know, and the FDA doesn’t know, at the very least, consumers should know.  We have a right to know if our food has been genetically engineered, and we have a right to choose for ourselves whether to eat this food and feed it to our families.

Walmart’s blind embrace of Monsanto’s Bt toxin corn could not offer a better argument for Proposition 37 – the historic ballot initiative that would require labeling of genetically engineered foods in California.

Voters will decide on the question this fall, but not before they are bombarded with deceptive ad campaigns funded by corporations that have shoveled $25 million into the opposition, most of it in just the last week.

As Yes on 37 media director Stacy Malkan told the Associated Press, “It’s an epic food fight between the pesticide companies and consumers who want to know what’s in their food.”

Meanwhile, Walmart should know better: Nearly half a million of its customers sent letters urging the store not to sell the genetically corn – but the company ignored this public outcry and took a different tact than grocery outlets such as Trader Joe’s and Whole Foods, each of which refused Monsanto’s sweet corn offer.

Reasonable people may disagree on the health and environmental risks of genetically engineered foods, but the American public is in overwhelming agreement – across party lines – about one thing: the need for labeling and the inherent right for consumers to know what’s in our food.

The FDA received more than a million comments from concerned citizens on a petition demanding that genetically engineered foods be labeled, and poll after poll indicates that 90 percent of Americans (and Californians) agree. And in just a 10-week period earlier this year, an army of petitioners in California gathered nearly one million signatures, easily qualifying Prop 37 for November’s ballot.

Yet, this overwhelming public desire for the right to know what’s in its food continues to fall on deaf ears.  The FDA has made it abundantly clear it is adopting a “trust the companies” philosophy over a “trust the people” one.

This leaves California voters with the final say on November 6. Do we want to know what’s in the food we eat, or is that decision better made by corporations that don’t want us to know what they are doing to the food system?

Zack Kaldveer is the assistant media director for the Yes on Prop 37 campaign and former communications director of the Consumer Federation of California, and editor of the California Progress Report.