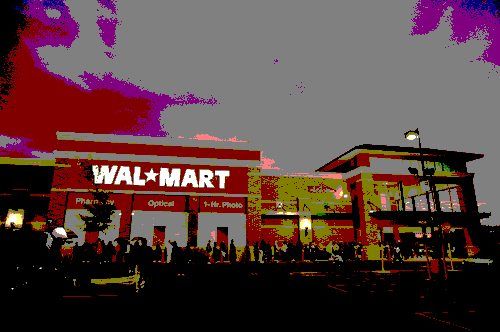 Now that we know corporations are people, it may be time to wonder: Is it possible that corporations have feelings?

Does Walmart, Corporate Person, feel bad as communities reject its plans to move in next door?

If so, the world’s largest retailer is bravely hiding its hurt as it marches, head held high, into Los Angeles’ Chinatown. Community opposition erupted a couple of weeks ago as soon as word got out that Walmart planned a store at Chavez and Grand, but Walmart hasn’t flinched publicly. (Queries to Walmart for this post were not answered by publication time.*)

“Now that our Walmart Neighborhood Market has received all necessary approvals, we look forward to serving downtown customers soon. We appreciate all the community support to date and will continue to engage with residents and businesses in the area to talk about the jobs, economic development opportunities and new grocery options our store will deliver.”

The social sting may deepen today after community people rally in support of a not-Walmart-friendly measure proposed by Councilman Ed Reyes, whose First District includes Chinatown.

Reyes’ city council motion doesn’t even mention Walmart by name (yet another snub to its corporate-personhood feelings?), but the measure does recommend that the city protect Chinatown’s historic and cultural integrity by denying construction permits to cookie-cutter-style businesses that use a standardized façade, decor and color scheme, standardized merchandise.

Chinatown has its own unique character, its own stores, shops, restaurants, parks and community centers. If a brand like Walmart bulldozes in with smiley-faced advertising, blue-shirted associates and computer-tracked inventory, it will alter the character of an irreplaceable Los Angeles cultural institution.

And it’s not just a style issue—the retail giant might well consider painting dragons (Walmart blue) on the storefront to try and fit in—but it’s Walmart’s potential effect on the local businesses essential to community cohesion that worries Chinatown residents and employees.

When a retailer like Walmart–one that controls global supply chains and has perfected the art and science of inventory—moves in within blocks of the local mom-and-pop shops, it’s got its own centrifugal force.

Local businesses tend to wither in the wake of Walmart’s arrival. A 2009 Loyola University study on the effects of a West Chicago Walmart showed that approximately one-quarter of the businesses in a four-mile radius closed down within two years of the store’s 2006 opening. And the likelihood of shutting down was related to proximity—the closer the businesses were located to the Walmart, the more likely they were to shut down.

And there’s this: Walmart has dominated the rural and suburban markets with its “big box” model of 200,000 square feet, but has re-adjusted its sizing to ease forays into urban areas. The proposed Chinatown store is 33,000 square feet (well shy of the square-footage that would have required the retailer to comply with a City of Los Angeles ordinance requiring a report on the potential economic, environmental and social impacts of a proposed development before obtaining permits.)

Wal-Mart depresses area wages and labor benefits contributing to the current decline of good middle class jobs, pushes out more retail jobs than it creates, and results in more retail vacancies. There is no indication that smaller “urban” Wal-Mart stores scattered throughout a dense city in any way diminish these negative trends. Rather, such developments may actually result in more widespread economic disruption.

Some representatives of Chinatown business organizations have voiced support for Walmart, but others in the community are less enthusiastic.

Diana Han, who works for Ai Hoa, a full-service supermarket selling produce, fish and poultry, worries about a Chinatown Walmart. Her work at Ai Hoa, she says, has supported her family and she’s not sure what she would do if it were to close down.

But more than that, Han says, if the small businesses that form Chinatown’s backbone close, “residents will have to move out to go live in a more Chinese community.”

Sissy Trinh, of the Chinatown-based Southeast Asian Community Alliance, has a similar perspective. In an interview for KNBC news, Trinh worried that Chinatown could lose some of its distinct character if Walmart were to put local shops out of business. “It would be like any other neighborhood,” she said. “Not Chinatown.”

Union and Government Partner for Good of City