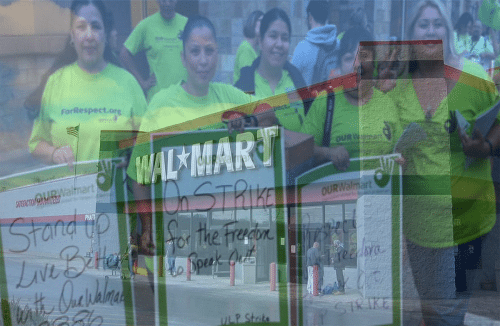 Just three days after the first Walmart employee strike in history, Walmart issued an internal memo entitled Response to Walkout/Work Stoppage that surprisingly cautions against any but the most gentle treatment toward strikers.  The document, meant for the eyes of salaried employees only and dated October 8, was leaked by the Huffington Post yesterday.

The strikes began at the Pico Rivera store in California on October 5 and had spread to 28 stores by October 9. The internal memo sets forth a new policy of non-interference and adherence to the National Labor Relations Act, affirming the right of employees to strike. It specifically states:

Do not discipline associates for walking off the job… (Emphasis in original document).

Dan Schlademan, Director of Making Change at Walmart, spoke to the Huffington Post on the unusual document: “I’ve been doing this work for 20 years, and I’ve never seen a document like this.”

There are several possible explanations for the nominal change in Walmart’s policy. After walking off the job, OUR Walmart associates have promised to ramp up actions due to retaliatory firings of workers involved in informal organizing. Over 20 unfair labor practice charges are currently extant, in addition to individual lawsuits brought by former employees alleging wrongful termination. Perhaps Walmart wants to steer clear of further charges in the eyes of what they see as a worker-friendly NLRB.

Furthermore, the strikers have already gathered massive public support. Illinois strikers dropped off a petition to a downtown Chicago Walmart store bearing 100,000 supporting signatures. A deluge of editorial ink has been spilled in support of the historic strikes.

The argument could be made that OUR Walmart associates are winning the PR battle – no one has been fired since the strike spread to 28 stores — and they are bringing publicity to retaliatory firings, adverse conditions and the ability of non-represented workers to strike. Warehouse workers at a Walmart distribution hub in Elwood, Illinois recently won concessions for their own strike and returned to work after 21 days.

Shlademan comments on the sea change in Huffington Post:

What’s important about this piece of paper is that it solidifies what people saw for the first time during the strikes, which is that Walmart employees were able to walk out in protest, and the next day were able to return to work. For many of them, that was amazing to see.