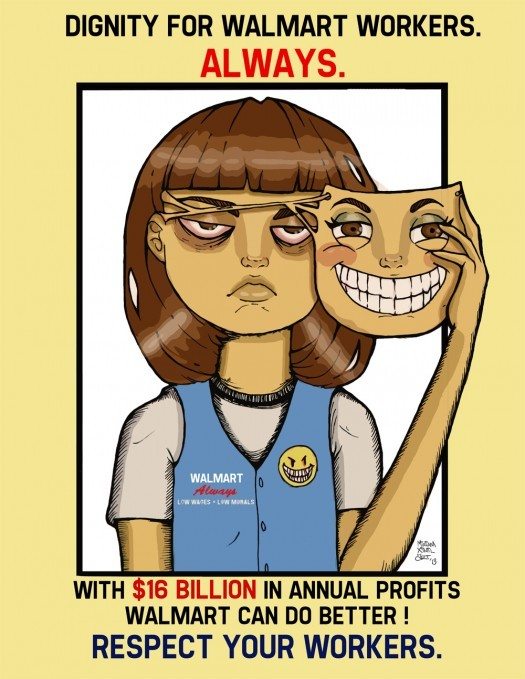 I recently had the privilege of attending a banquet recognizing Walmart workers who have dedicated themselves to winning policy changes that affect the way they are treated by this retail giant. The event was held at the First AME Church of Los Angeles, which has been in the forefront of fighting for civil rights and social justice.

Many stories shared by the workers reflected the nightmare that is their Walmart employment experience. One very nervous young woman spoke of being seriously injured when luggage from a storage rack fell on her back. Her supervisors refused to administer medical attention or even call for an ambulance; she had to drive herself to a hospital.

There are warehouse workers at subcontracted facilities who find themselves working in trailers whose temperatures reach more than 100 degrees – such workers are faced with limited water availability and supervisors who don’t permit frequent breaks for employees to cool down.

Pregnant women are forced to lift heavy inventory stock and many employees spoke of how they were willing to be fired as a result of picketing efforts if, in the long run, they can create a better life for their families and themselves; some have been arrested.

Walmart, these workers reported, is also unwilling to offer any kind of flexible hours so that they can attend school to better their education and skills or to care for family members or simply to know how to plan their own work week. Often employee hours are reduced to as few as 16 hours per week or their hours vary from week to week or their pay is lowered so that they cannot earn what is necessary to cover even their minimal expenses. Worse, the company retaliates against employees who make requests for regular hours, safe working conditions, and decent wages. If Walmart spent on employee pay and benefits even a small portion of what they spend on commercials trying to convince the public just how wonderful the company is, the employee issues would be greatly ameliorated.

In the past, Walmart has made employees work off the clock without extra pay and then threatened them with job loss if they were unwilling to do so or if they reported this violation of the labor laws. Walmart has a history of giving welfare applications to new hires because it knows these employees are not paid enough to afford the basics of life. It has abrogated its moral responsibility and expects the taxpayers to make up in relief what Walmart itself is unwilling to provide.

As far as its outsourced workers are concerned, Walmart has made it clear to its vendor partners that they must keep costs down abroad in order to keep prices down here. Walmart patrons may benefit from greater affordability of the stores’ selections, but at what cost and at whose expense?

Consider the recent tragedy at Rana Plaza, the Bangladesh garment factory that collapsed in May. The owner of that complex hired engineers to inspect his property just the day before the tragedy. They discovered that three pillars had severe cracks in them. The report stated that the premises must be closed immediately but the owner refused. Because they were not independent inspectors with authority to mandate modifications, the owner did not have to abide by their findings and recommendations. The next day more than 1,000 people died.

It is all about the bottom line for Walmart, but it does not have to be that way for us. Give credit to and patronize companies such as Tommy Hilfiger, Abercrombie and Fitch, H&M, and Calvin Klein, which have signed onto a landmark international pact which calls for independent inspections to assure worker safety—something Walmart (and Gap) will not do. Walmart refuses, as did the Bangladeshi factory owner, to put independent inspections in place in the buildings of its overseas suppliers.

[Update: A July 10 Los Angeles Times story reports that Walmart and 16 other U.S. retailers “have signed on to a five-year agreement to help improve safety at garment factories in Bangladesh.” The Times notes that the agreement is separate from the “legally binding” one cited above that has been signed by Tommy Hilfiger, H&M and 68 other companies.]

Last month workers and supporters participated in a nationwide caravan that converged on Bentonville, Arkansas, for Walmart’s Annual Shareholders Meeting. There they rallied to press their issues on the company’s investors. Can we do any less than support these workers when they strike or call for boycotts? Last week, workers and supporters converged on the Crenshaw Walmart where we were met by LAPD officers, Walmart security guards, 15 managers from different stores—all of whom tried to block our peaceful demonstration. Some of us were almost arrested and many of us were mistreated. Nevertheless, many patrons and workers applauded our efforts.

(Rosemary Jenkins is chair of the Northeast Valley Green Alliance.)