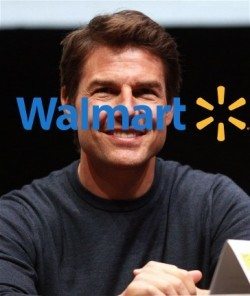 Every year Walmart holds a combination shareholder meeting and pep rally to whip up enthusiasm and promote its image as a good investment and a good corporate citizen. These huge events have the quality of a religious revival meeting, including testimonials and music to keep its stockholders and employees (whom Walmart calls “associates”) enthralled. Women’s Wear Daily called last month’s event, with 14,000 shareholders and employees, “a high-octane, entertainment-filled spectacle with moments devoted to business.”

The company always invites celebrities to entertain and mingle. At last month’s gathering in Bentonville, Arkansas — the company’s headquarters — singers Kelly Clarkson, Jennifer Hudson, John Legend, and Prince Royce performed, Hugh Jackman emceed, and Tom Cruise cruised the crowd, then mounted the stage and said: “I’ve wanted to come here for quite some time, actually because the culture you have here is like no other. I truly admire your company. [It’s] a role model for how business can address some of the biggest issues facing our world.” He also praised Walmart for “using its size and scale to improve women’s lives around the world.”

Even the celebrities, however, couldn’t completely drown out the comments of a several uninvited and unwelcomed guests who raised questions about Walmart’s business practices.

Kalpona Akter, a former Bangladeshi garment worker and a leader in the fight for safer factories, was invited to Bentonville by Walmart shareholder Jim McRitchie, who wanted his fellow shareholders to hear first-hand about the miserable conditions in a Walmart supplier factory in Bangladesh where 112 workers were killed in a fire last November at the Tazreen factory, the 1,129 people who were crushed to death in April at a Bangladeshi sweatshop that produced clothing for Walmart, and Walmart’s refusal to join with European retailers in signing an international safety agreement that would prevent such disasters in future. Akter brought along Sumi Abedin, a garment worker who survived the Tazreen fire, whose testimony was more gripping than anything Tom Cruise had to say.

Janet Sparks, a Walmart employee from Louisiana, came to the Bentonville love-fest to raise questions about CEO Michael T. Duke’s compensation. Walmart employees “are stretching our paychecks to pay our bills and support our families,” said Sparks, a member of OUR Wal-Mart, an employee group. Pointing to Duke’s $20.7 million in 2012 pay, she said “with all due respect, I don’t think that’s right.” Sparks’ remarks triggered cheers and applause from the crowd, which was remarkable given the fact that the audience was comprised of shareholders and hand-picked loyal employees.

Walmart invites big-name celebrities not only to entertain the shareholders but also to lend legitimacy to the company, which for years has been the target of substantial criticism from human rights groups, environmentalists, women’s and immigrant rights activists, unions, small business organizations, and many others. By appearing at these annual events, the celebrities appear to be endorsing Walmart’s business practices.

It is understandable why singers and movie stars accept Walmart’s invitation. After all, it is the nation’s and the world’s largest retailer, with total sales last year of $444 billion. It sells 40 percent of all DVDs and more CDs than any other chain.

But many celebrities don’t want to see themselves as cogs in Walmart’s propaganda machine. In fact, Walmart’s celebrity cultivation is part of a costly counter-offensive to divert public attention away from its outrageous behavior at home and abroad. As part of its recent attempt at an image make-over, Walmart has increased its philanthropic giving, particularly in African American and Latino communities, in order to win their support to expand its stores into urban areas which, until recently, Walmart had avoided. Walmart’s charitable donations are tiny crumbs compared to its profits and its (and the Walton family’s) political donations to right-wing causes. But if you only looked at the company’s TV ads or its latest annual report, you’d think CEO Michael Duke should be nominated for a humanitarian of the year award.

Walmart has to spend so much on self-serving propaganda because many Americans are asking whether the company’s business model is good for our country and the world. Surely not all of these celebrities endorse the Walmart way. If they were informed about Walmart’s controversial and inhumane practices in the United States and around the world, some of them would certainly distance themselves from the retail giant. So, too, would other celebrities who Walmart will invite to future jamborees.

There are, no doubt, celebrities with the conviction and courage not only to refuse Walmart’s invitation to the annual meeting, but also to join forces with organizations like OUR Wal-Mart that have been pushing Walmart to behave more responsibly toward its workers, the communities where it makes and sells its goods, and the global environment.

Walmart is the largest private employer in the U.S. (1.3 million employees) and the world (2.2 million employees, not even counting those who produce the goods sold in its stores). As a result, as historian Nelson Lichtenstein documents in his book, The Retail Revolution: How Walmart Created a Brave New World of Business, the company sets the standard for jobs — a standard so low, that hundreds of thousands of Walmart workers live in poverty — including many who work full time. Walmart also drives down living and working standards around the world, including in countries like Bangladesh, where Walmart goods have been produced in factories that recently burned and collapsed, killing over a thousand people, mostly woman.

Walmart exacerbates the widening gap between the very rich and everyone else. The average full time Walmart “associate” makes about $15,500 a year. And worse, Walmart is pushing more and more workers toward a permanent part-time status. Meanwhile, the six members of the Walton family — heirs to the Walmart fortune and near majority owners of the company — have a combined wealth of $115 billion. That’s more than the bottom 42 percent of Americans combined.

Walmart doesn’t only impact workers. The company’s “grow at any cost” mentality creates negative impacts on the environment, food production and small businesses.

Walmart’s growth-at-all costs model contributed to the company building a disturbing track record when it comes to workers’ rights, workplace safety, legal compliance, environmental destruction and more. Here are some things that celebrities might want to know about Walmart before they say “yes” to an invitation to its next Bentonville bonfire.

Funding a Political Agenda that Hurts Our Communities

No doubt celebrities’ agents will urge them to avoid any controversy and withhold any public or financial support to groups that criticize Walmart. But any celebrity who accepts Walmart’s invitation to entertain at its annual events is taking sides in an ongoing controversy over company’s many questionable practices.

Hugh Jackman, Queen Latifah, Taylor Swift, Will Smith, Elton John, and other celebrities: Listen to the song “Which Side Are You On?” Then answer the question.

At a Crossroads: Labor Faces the Future