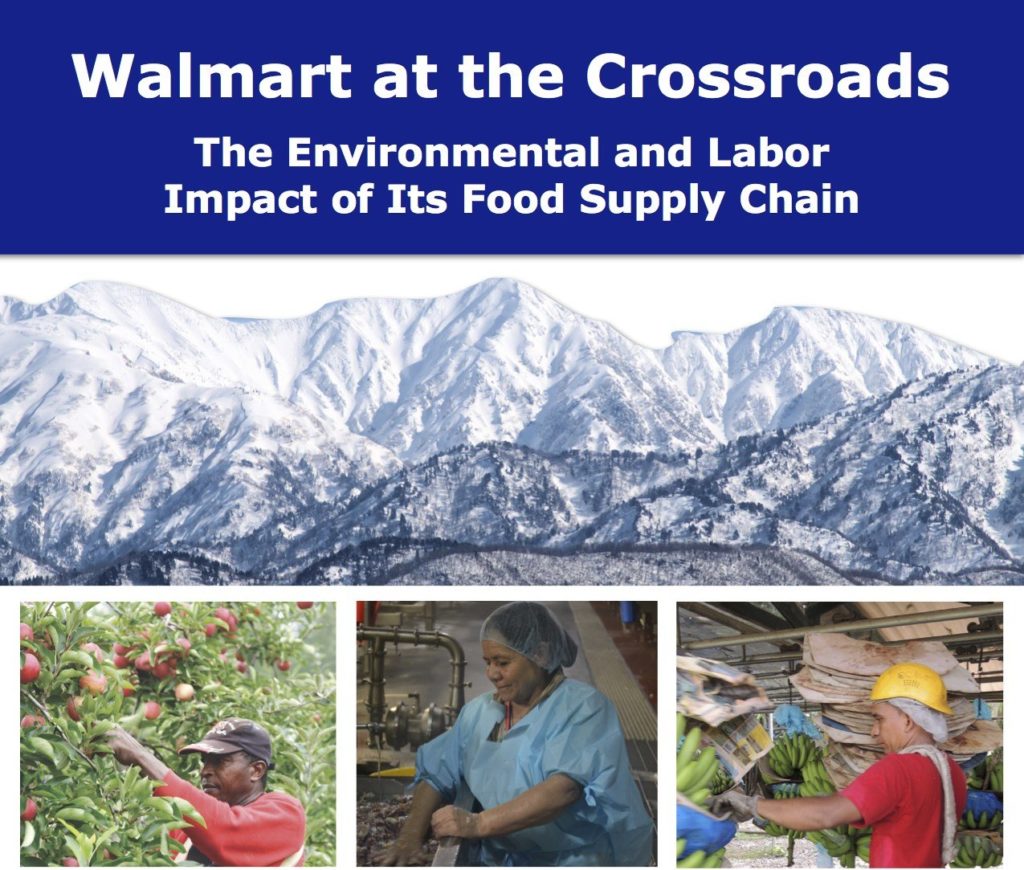 “With great power comes great responsibility.” It’s one of those truisms that’s been echoed in various forms throughout the ages, from the likes of Winston Churchill, Franklin D. Roosevelt and even the Spider-man comics. Unfortunately, powerful major corporations like Walmart don’t often take responsibility for their tremendous impact on America and the rest of the world. As Walmart opens its annual shareholder meeting on June 5, we at the Food Chain Workers Alliance urge stockholders and executives alike to consider our newly-released report, Walmart at the Crossroads, which examines the impact of Walmart’s food supply chain on labor and the environment.

Walmart, number one on the Fortune 500 list of American companies, has net sales totaling $473.1 billion. With foodstuffs making up 55 percent of its sales, this corporation controls 25 percent of grocery sales in the U.S. Consequently, Walmart’s actions and inactions reverberate through the food chain, making huge impacts on agricultural practices, treatment of workers, consumer health, the environment and outsourcing of jobs. In recognition of these impacts, Walmart has created an  “Ethical Sourcing” standards manual for its suppliers. But our investigation of Walmart’s practices shows that the thirst for extraordinary profits too often wins out over a code of ethics.

Walmart produces 45 metric tons of carbon dioxide for every million dollars of sales.

Although the “Ethical Sourcing” manual requires that suppliers comply with existing laws, we found that both the corporation and its suppliers have a long history of violating labor standards. Walmart’s demand for lower prices creates the incentive and the need for suppliers to cut wages and benefits, neglect safety and working conditions, and even ship jobs to overseas sweatshops. Exploitation and discrimination often go unchecked. In one instance, immigrant workers in Louisiana were being locked into a factory and compelled to work 16-24 hour shifts by a Walmart seafood supplier. Only after an advocacy group publicly pressed for improved working conditions did the retailer take action.

In 2005, Walmart’s then CEO, Lee Scott, committed to a laudable environmental agenda including 100 percent use of renewable energy. But 10 years later, only 16 percent of its electricity use in the U.S. is from green power. At 45 metric tons of carbon dioxide for every million dollars of sales, Walmart’s operations are significantly less efficient than such competitors as Target and Costco. Today, Walmart ranks 33rd on the list of the top industrial polluters.

It is time for Walmart to take a leadership role, not just in size and revenue, but in social responsibility. And Walmart can actually take action today. United Natural Foods, Inc. (UNFI) is the largest distributor of organic and natural food, and is a distributor for Walmart’s Neighborhood Market stores. Taylor Farms is the largest salad processor in the world and a major supplier to Walmart. Workers at these companies are currently organizing to join the Teamsters union, but management has retaliated by threatening and firing workers. UNFI still refuses to recognize the union formed by their drivers in Moreno Valley, even though it was federally certified in November 2014. Walmart could enforce own its existing code of conduct by instructing these companies to respect the workers’ right to organize and collectively bargain. But so far, it has chosen not to.

Walmart’s actions, both good and bad, will strongly influence its suppliers and competition. So please take action and sign our petition to Walmart CEO Doug McMillon, calling on Walmart to make real positive changes for workers, farmers, communities and the environment.

[divider]Joann Lo is Co-Director of the Food Chain Workers Alliance.
Related Topics:Walmart
Up Next