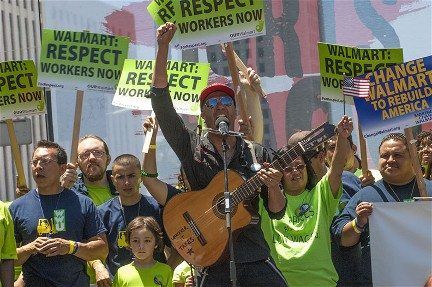 On June 30, I rode a bus from near the South Los Angeles site of Walmart to the Cornfield – the starting point for the largest rally ever held against the retail giant. It was on this bus packed with African American community activists that I came to fully understand why, as an African American pastor, I have for the last 10 years refused to shop at Walmart.

There has long been a debate in the community about whether low-income African Americans should shop at Walmart. Some people say that Walmart helps those who are struggling economically because they keep their prices low.

The truth is that Walmart is the leader at operating in its own best interest. And that interest – as we see with the enormous wealth of the Walton family – is to make as much money as possible.

There are several reasons why people who depend on the low prices and availability of Walmart should stop shopping there. First, it creates solidarity with workers who are struggling every day to earn the wages and benefits to be thriving members of society. We are supporting workers who live in our communities and shop in the stores we shop, but who fail to garner the same benefits that other workers get.

Second, refusing to patronize Walmart helps refute the belief that “any job is a good job.” A job with low wages and poor benefits leads to home foreclosures, auto repossessions and a continual state of economic deprivation. This is evident in the fact that many Walmart employees rely on public assistance for health care even though they have a steady job. Walmart jobs are bad jobs, and we have to remember that and stay away until they become good jobs.

To earn our consumer dollars, businesses have to respect their workforce by giving them good wages and benefits that they can support a family on. They must have a global chain of respect extending throughout all of their suppliers so that they are creating an economic process where everybody associated with them is participating in their economic success. Until this is done at Walmart, we must not shop there.