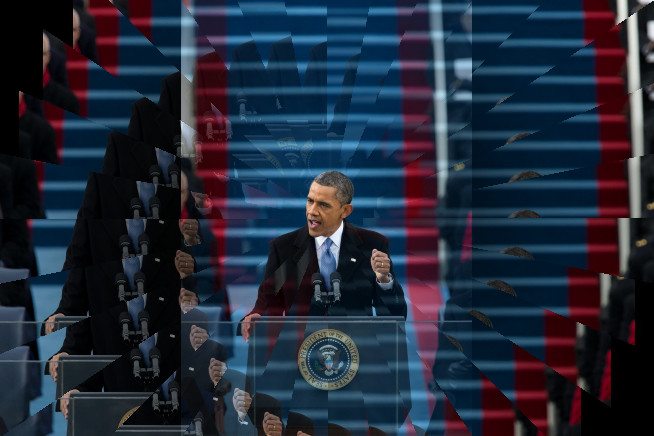 When the President finished his inaugural speech the other week, I said to my wife Susan, “That was a great piece of rhetoric.” By that I did not mean a lot of flowery words strung together or a piece of political discourse from a particular party’s perspective. I meant it as high praise of a public address that transcends the immediate moment and inspires us as a people to live up to our nation’s principles. This one, unlike four years ago, felt like the caliber of speeches I had studied in college in a course on Rhetoric and Public Address.

At least that is what I thought I’d heard. The President talked about the unresolved problems that face us as a nation: immigration, gun reform, deficit control, climate change, economic inequality. He placed those within the context of this nation’s founding principles: life, liberty, the pursuit of happiness. Then the President reminded us how we Americans have always acted to resolve the issues that face us: from Seneca Falls to Selma to Stonewall – three locations that struck movements to expand democracy and make the pursuit of happiness more possible for more people. And he did it inside of 10 minutes.

But when I opened the newspapers the next day, I was shocked to discover I had heard a “liberal” speech. I discovered that I was hearing the President’s agenda for the term ahead, while I thought I had heard him list the problems that stand before us as a nation and which we must address to move forward as a society. Yes, I did hear him defend Social Security and Medicare, but as a platform from which people take risks, which is what I think entrepreneurism is about, whether someone is starting a new business or a new social service project. But I did not hear the partisan panting I recall from Bush in 2004 or Clinton, for that matter, in 1996.

Had this been a “liberal” speech it would have mentioned the problem of low-wage jobs, perhaps affirm the role of organized labor in pressing for middle-income pay checks, maybe throw in something about raising the minimum wage to a livable wage, perhaps a word about the fraying safety net. But the President didn’t include any mention of those issues except a brief reference to the waning middle class. Since the speech was labeled a “liberal speech,” I thought I must be so left of center that I didn’t even recognize the speech for what it was.

Then I got an email from a friend active in the arena of public policy in Los Angeles who defines himself as a “radical moderate.” He was on a plane back from the inauguration and a couple of side meetings while in Washington. He assured me that from what he was hearing “change” was going to come. He didn’t say what kind of change or in which areas, but it was on its way.

In the weeks that have followed, more thoughtful commentary has shifted toward this direction. The Republicans split over the fiscal cliff crisis, and then they backed away from a debt ceiling fight. Republicans in the House seem divided over which strategy they should take in the immediate near term – hard line hold ‘em or issue-by-issue pragmatism.

Perhaps the pundits and the papers couldn’t see outside their own lenses of either/or, us/them, this/that. It had to be a liberal speech unnerving to conservatives because it was surely not a speech that bowed to the powers of resistance — powers that would return us to the past. Apparently, there are and only can be two poles which must be in opposition. According to this view we must always be in a great conflict of some sort.

So, have the tectonic plates of polarization actually shifted in some way the press has missed? I have no idea, but the President we elected thinks we are a nation facing major issues that we must address for the health of the country and the continuation of this grand experiment we call democracy. At least, that’s what I heard him say, and I think my college Rhetoric and Public Address professor would have applauded.