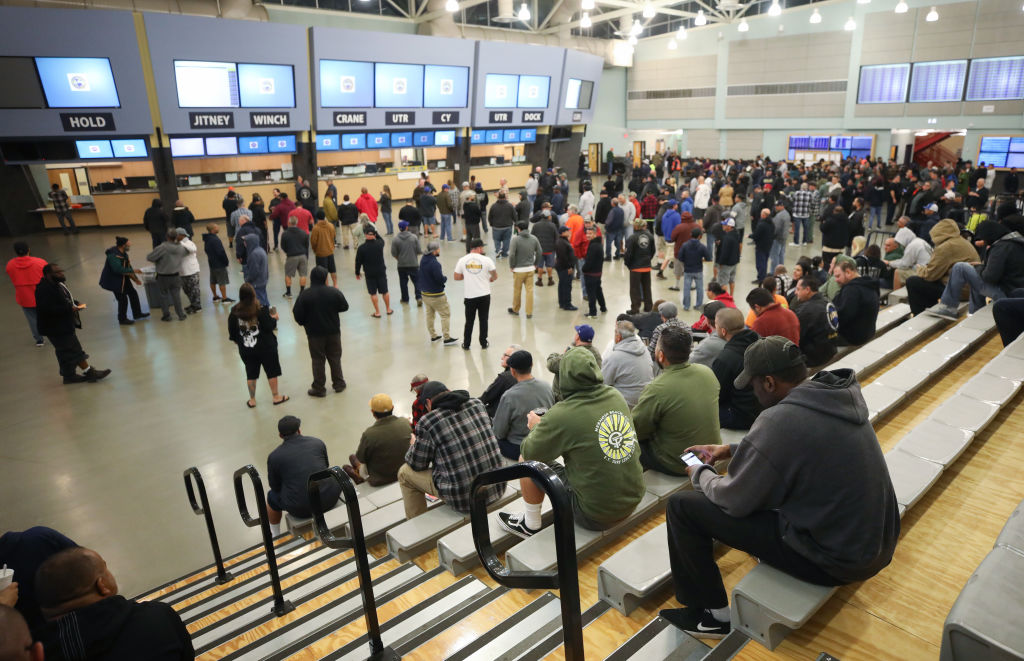 Since cities and states began issuing stay-at-home orders in early March to counter the spread of COVID-19, a mind-boggling 16 million-plus jobs have been lost, at least temporarily, representing the speediest and deepest economic collapse since the Great Depression. Many of those unemployed men and women also lost their employer-provided health insurance coverage at a moment when a pandemic is raging — and when containment strategies rely on early identification and isolation of carriers. The perverse structure of the American health insurance system means that huge numbers of people, if they don’t have a family member whose insurance will cover them, are having the continuity of their health care disrupted. To worsen matters, the largest private insurance companies are poised to introduce steep premium increases.

Historically the jobs that are most vulnerable to being lost at the start of a recession are those that are low paid, physically demanding and involve long hours. Many workers in such jobs already have precarious health situations.

Larger companies participating in California’s insurance exchange could be forced to increase premiums by as much as 40 percent.

“People whose incomes are below the median, or the 25th percentile, tend to be less healthy,” says Marianne Page, professor of economics at the University of California, Davis, and director of the campus’s Center for Poverty Research. They are, in consequence of their poorer general health, particularly at risk of succumbing to COVID-19. And yet it is the members of this very group that that are the most likely to now be losing their health coverage.

In California alone, the Economic Policy Institute estimated that by April 4 more than 2 million people had recently filed for unemployment insurance — and many of these had likely lost insurance coverage as a result. Since then, the job losses have only increased, along with the numbers of people losing their insurance.

Assuming the companies that fired them still exist, these individuals can sign on for COBRA, allowing them to pay out of pocket, for up to 36 months, for the health insurance that their employers previously paid for; but COBRA can run to thousands of dollars per year per family member, a sum that many — probably most — of the newly unemployed simply cannot access at the moment.

“It’s a staggering number of people,” acknowledges Anthony Wright, executive director of the Sacramento-based Health Access California advocacy organization. Worsening the situation is that some employers have cut back their employees’ hours and, once they are no longer deemed full-time, stopped paying their health care benefits.

At the very least, the pandemic is a huge test of California’s financial and moral mettle.

As a result, in the middle of a pandemic a tsunami of uninsured are now signing up for Medi-Cal, or using the reopened enrollment period for the state’s insurance exchange to shop around for new, subsidized, insurance coverage for themselves and their families. Many insurance companies worry that, unless Congress releases federal funds to help provide treatment for COVID-19 sufferers, their bills for covering those who get sick during the pandemic will be so high over the coming months that they could force smaller insurance companies on the exchange into bankruptcy and larger companies to increase premiums by as much as 40 percent, according to an estimate from Covered California, the agency that manages California’s Affordable Care Act (ACA) health insurance exchange.

California has created the country’s most user-friendly insurance exchange, under the ACA, and has made enormous strides in recent years in expanding Medicaid coverage to the near-poor – an expansion that is largely, although not entirely, paid for by the federal government — and, at the state’s expense, to young undocumented immigrants. Nevertheless, it is an enormous logistical and financial challenge to get California’s newly uninsured re-covered with decent insurance at speed.

“We’ve aggressively expanded coverage through the ACA,” notes Chris Hoene, executive director of the California Budget and Policy Center. Over the past decade, California’s pool of uninsured residents has dropped from nearly one in five people to only seven percent of a population of nearly 40 million. But, he asks, “Will California have the resources” to continue driving down that number by expanding coverage to those, especially the undocumented, who are left out of the federal eligibility criteria?

At the very least, the pandemic is a huge test of California’s financial and moral mettle. The state’s Department of Finance, and the chairs of legislative budget committees, recently warned all California government agencies of extraordinarily tough budget conditions as a result of the state’s burgeoning pandemic-related bills and the loss of tax revenue as jobs disappear and capital gains on the stock market evaporate. And while Senate President pro tem Toni Atkins has told journalists that continuing to expand health care coverage remains a legislative priority, California is going to have to navigate uncharted financial waters in coming years as the economic fallout from the pandemic cuts deeply into state revenues.

Add into the mix the fact that many legal immigrants have been pushed out of the safety net system by President Trump’s regulatory changes and that undocumented immigrants never had safety net protections to begin with. California, with 27 percent of its population foreign-born, faces a particular challenge in keeping access to medical care open for its 10 million-plus immigrants. “The impact is on their health and on the economy,” argues Sarah Dar, director of health and public benefits policy at the California Immigrant Policy Center. “Because of people getting sick and not being able to work. This moment highlights the stark downside of this system of leaving people uninsured.”

Garment Worker: “I’ve never been homeless, but if there’s no way to work I’ll have to sleep in my car.”

While many documented immigrants have recently lost jobs that came with health insurance, and like their citizen neighbors are now scrambling to find new insurance options, most undocumented adults in the state work low-income jobs lacking any kind of security of employment, and which never came with health insurance to begin with. They have never had easy access to doctors and medicines.

Given the sheer numbers of undocumented in the state – roughly two and a half million — the possibility of containing COVID-19 through comprehensive testing, treatment and quarantining of carriers becomes ever more daunting. The community health centers on which many undocumented residents rely for basic health care needs, did receive $1.3 billion, to be distributed to CHCs around the country, when Congress passed the CARES Act. But given the scale of need, that’s simply a drop in the bucket. On a daily basis the CHCs remain overwhelmed with patients, understaffed and chronically under-resourced.

“I don’t have access to unemployment or any benefits. It’ll be a really big struggle,” says Pablo, a 38-year-old undocumented worker in Los Angeles’ garment district, who, until his factory closed down in mid-March, was working for piece rates that came out to far below hourly minimum wage. “I’ve never been homeless, but if there’s no way to work I’ll have to sleep in my car. I’ve been limiting food, rationing the food I have.”

In addition to all the usual stresses that come with being undocumented and ineligible for public benefits, these days Pablo worries that he might get sick with COVID-19 and have no access to treatment, other than via the emergency room, and no way to pay for that treatment should he prove to be infected. “Any time I feel ill I start thinking whether I could get it. I recently found out someone I know died of the coronavirus here in Los Angeles. I’ve had a lot of anxiety and stress. I’m afraid to go to the doctor.”

California Gov. Gavin Newsom’s administration has made health care coverage a priority, and has been aware from the get-go that the more people are covered the better public health outcomes will be for all.

Even before the pandemic, Newsom was looking for ways to fund an expansion of Medi-Cal to cover low-income undocumented seniors. His budgets have generously funded the Covered California insurance exchange, and early on in the pandemic the exchange re-opened the enrollment period so that Californians who found themselves without insurance could quickly access affordable plans.

In addition, the legislature recently waived the requirement that Medi-Cal recipients produce documentary proof, every 60 days, of financial eligibility to remain covered by the program – meaning that coverage for those Californians enrolled in Medicaid will remain untouched at least through the duration of the pandemic. And early on in the response, Newsom’s administration requested a waiver from the federal Centers for Medicare & Medicaid Services to allow Medi-Cal providers to do telemedicine visits with patients, and to streamline the process for doctors to get reimbursed for treating patients covered by Medi-Cal.

While some states have made it cumbersome and time-consuming to enroll in ACA-mandated subsidized insurance, California’s process is quick, and coverage begins at the start of the month following enrollment. And for those who qualify for Medi-Cal, coverage is retroactive, so that if someone enrolls midmonth, their medical expenses going back to the first day of that month are paid for.

But all that still might not be enough to get the undocumented into treatment centers. Or to convince those who have insurance, but who, after losing their jobs, have had to buy lower-standard plans that come with higher deductibles and co-pays, to risk the inflated medical bills that will come with prolonged treatment. Without federal intervention to cover the cost of COVID-19 treatment, “We’ll have a bunch of people making decisions not to be treated,” Chris Hoene worries. “And that’s a public health risk to them and to the community at large.”

Anthony Wright agrees. “We’re not going to be able to control the virus unless we get everyone covered and able to get tested and access the treatment they need,” says the advocate, who has long been a leading voice in campaigns to universalize health care access in the state. “While the Affordable Care Act provided a lot of patches, it’s still patchwork, and the system leaves a lot of gaps that people will fall through. And we need quick action to contain the virus.”