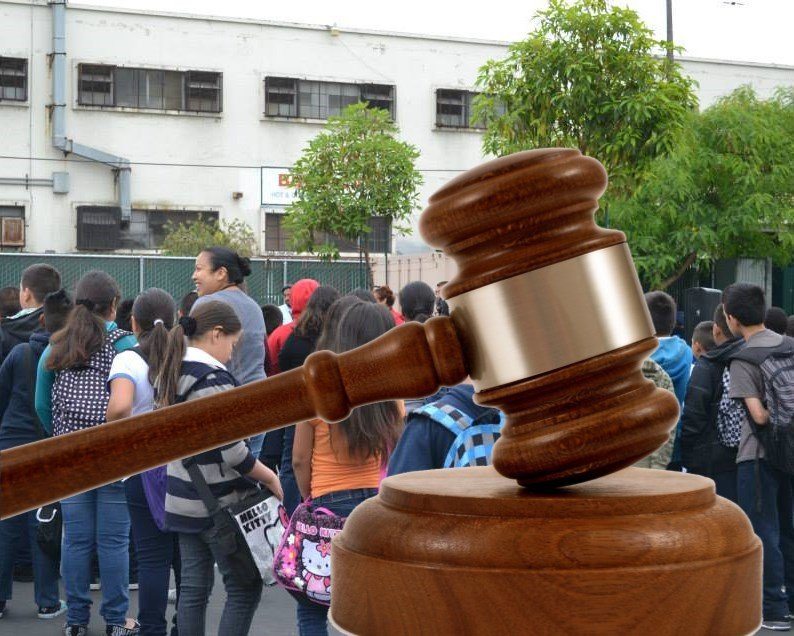 The national debate over the quality of public school education and its teachers shifts to a courtroom this morning as day one of Vergara v. California opens in Los Angeles County Superior Court.

Filed on behalf of nine student plaintiffs (including Beatriz and Elizabeth Vergara), the suit seeks to wipe out the core of state teacher employment rights by overturning five California statutes that it claims make it too difficult to dismiss ineffective teachers.

The lawsuit was originally filed in the spring of 2012 by Students Matter, a Bay Area nonprofit created by the wealthy Silicon Valley entrepreneur David Welch and financed partly by L.A. billionaire Eli Broad.

That’s when Students Matter revealed the names of an advisory committee that reads like a Who’s Who of privatized education interests. Heading the list is Students First, the lobbying group formed by former District of Columbia schools chancellor Michelle Rhee. Also included are Democrats for Education Reform, whose California chapter is run by former state Senator Gloria Romero; and Parent Revolution, which organizes parents to use parent-trigger laws to fire the administrative and teaching staffs of public schools in order to bring in private charters.

The plaintiffs are represented by the blue chip legal firm of Gibson, Dunn & Crutcher, which has put its superstar team of Theodore J. Boutrous, Jr. and Theodore B. Olson on the case. Boutrous and Olson are most known for successfully getting California’s same-sex marriage ban, Proposition 8, overturned in the Ninth Circuit Court of Appeals. In 2000 Olson also successfully argued for George W. Bush before the U.S. Supreme Court in Bush v. Gore,  and served as United States Solicitor General under Bush. In 2011 Boutrous won a landmark case for Walmart before the U.S. Supreme Court.

In a January 22 press teleconference, Boutrous and co-counsel Marcellus McRae laid out the plaintiffs’ case.

“We are going to have a trial for the first time that puts the California education system on trial,” Boutrous declared. “What we’ve seen is really that the system is dysfunctional and arbitrary, due to these outdated laws that handcuff school administrators from operating in a fashion that protects children and their rights to have quality of education.”

The specific statutes the suit targets, he said, are California’s teacher tenure law, the so-called Last In, First Out layoff law and three laws that guarantee teachers due process rights in the case of dismissal.

McRae summarized the plaintiffs’ factual evidence as resting primarily on a controversial 2012 study by economists Raj Chetty and John N. Friedman of Harvard, and Jonah E. Rockoff of Columbia, that employed value-added measures to quantify the effects of good teaching in various outcomes for students, well into adulthood.

McRae also said the team planned to use research by the economist Eric Hanushek that argues that firing the worst teachers will bring direct positive gains for students. Hanushek gained notoriety in the 1980s with a paper that claimed there was no direct relationship between school resources and student outcomes. That same paper also asserted that class size had no consistent effect on educational performance.

California teachers have a very different interpretation of the evidence – and strong opinions as to the real purpose of the suit.

The claim that teacher quality rather than low socioeconomic factors are the primary determinant of bad student outcomes, says CTA vice president Eric Heins, is like “blaming dentists for the high rate of cavities for citizens of Candyland.”

But what really distinguishes Vergara from previous equality-in-education suits, Heins claims, is its overreaching scope.

“It’s a very broad lawsuit,” he says. “It tends to link the statutes themselves to the students’ performance. And the statutes are statutes that are actually working. The problem is that when they’re ill-applied by administrators, it causes problems.”

Heins says that due process procedures aren’t perfect and can be a cumbersome and expensive process, one that teachers unions have been trying to streamline. However, he says, the real purpose of the lawsuit has little to do with equality in education.

“It’s very clear what the agenda is,” charges Heins. “This is a group of people who have failed legislatively, who have failed in the initiative process to gain a toehold in California, and now they’ve invented this problem to basically destabilize our schools with the ultimate goal of imposing a corporate model and creating a low-paid workforce.”