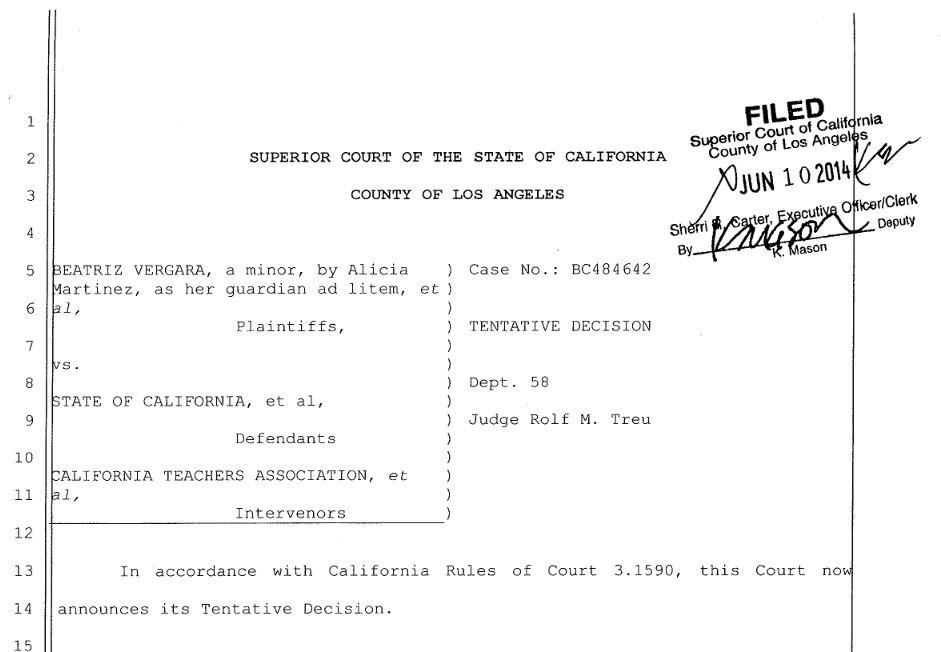 The potentially far-reaching case, Vergara v. California, was brought on behalf of nine schoolchildren, who claimed the retention of “grossly ineffective” teachers through five due-process statutes violated their civil rights. They were organized by Students Matter, a Menlo Park nonprofit created by Silicon Valley entrepreneur David Welch, who had hired the white shoe law firm Gibson Dunn & Crutcher to represent the nine at the bench trial before Judge Treu.

Treu, appointed by Republican Governor Pete Wilson in 1995, found “that both students and teachers are unfairly, unnecessarily, and for no legally cognizable reason – let alone a compelling one – disadvantaged by the current permanent employment statute.” Defense lawyers had argued during trial that sufficient policies were already in place to speedily protect students from underperforming teachers.

If upheld, Vergara would erase nearly a hundred years of teacher protections meant to prevent unfair firings. Attacks on teachers’ workplace protections have become commonplace in California; in 2010, plaintiffs in Reed v. California successfully challenged seniority-based layoffs in three Los Angeles middle schools. Vergara, Reed and other efforts targeting teachers are being spearheaded by a coalition of free-market education advocates and privatization philanthropists.

In a telephone media conference held afterward, the victors seemed barely able to contain their glee.

“This is a terrific, wonderful day for students and the California education system and the rule of law,” said lead plaintiffs attorney Ted Boutrous.

That will not happen. The defense team, which represents several teachers unions, has vowed a robust appeal.

“We’re very confident about basing our appeal on the case’s legal errors,” attorney Glenn Rothner told Capital & Main. “Nothing . . . tied the plaintiffs’ testimony to the statutes.” Rothner added that even if the seniority policies were thrown out, there was nothing to prevent teachers from negotiating identical protections in future contracts. If upheld, he said, Treu’s decision could have a destructive effect on California’s ability to hire educators.

“Because of the challenges of teaching today,” Rothner said, “there is an ongoing effort to recruit and retain teachers with low salaries. Even dedicated teachers might call it a day if the state can’t provide them with the one thing they can at present – job security.”

Aftermath: What the Vergara Decision Means

Commission Meets in Private; Is Fate Sealed for Community College of San Francisco?