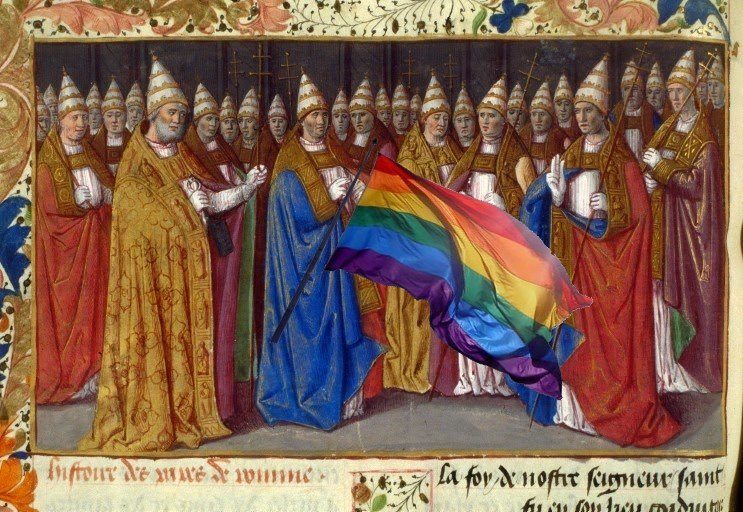 Is the Pope a tease? Not really. He’s trying. He challenged the neoliberal economic system just a month into his papacy and brought up one of its difficult byproducts: growing inequality. And last week, at his recently convened synod on the family, he attempted to coax his bishops to expand their definition of the family, acknowledging yet another difficult issue: the rapidly expanding fact of gay marriage. For a brief moment, it appeared the Church was not only poised to liberalize its definition of the family, but it might even be ready to jumpstart Vatican II and go so far as to overturn one of its most cherished catechisms: denial.

It all started with an October 13 press release that included this hopeful language for LGBT Catholics (the draft was credited to a Pope Francis appointee, Monsignor Bruno Forte, a theologian known for his progressivism):

“Homosexuals have gifts and qualities to offer to the Christian community. Are we capable of welcoming these people, guaranteeing to them a fraternal space in our communities? Often they wish to encounter a church that offers them a welcoming home. Are our communities capable of providing that, accepting and valuing their sexual orientation, without compromising Catholic doctrine on the family and matrimony?”

The answer Sunday, in the final vote, was “No.” Interestingly, the vote was 118-62, which means more than a third of the bishops likely favored the original text. Here’s what was left of the Pope’s efforts to drag the church into the 21st century (or was it the 20th?) when the smoke cleared and the bishops approved the final wording of the synod’s preliminary report:

“No grounds whatsoever exist for assimilating or drawing analogies, however remote, between homosexual unions and God’s design for matrimony and the family.” They threw in a crumb at the end: “Any sign of unjust discrimination in their regard is to be avoided.” Avoided? So if you must discriminate, we can tolerate that? What kind of message does that send?

It’s imperative to further parse this statement. What does “no grounds whatsoever” mean? We all know gay couples who love and care for one another, which is what marriage is about – isn’t it? Hopefully, all couples share that common ground. So, is the Church then saying, in effect, that love and caring are not part of marriage? Interesting. Actually, more like bizarre. Denial will apparently not be joining Limbo in the ash heap of Catholic doctrine.

But all is not lost, as fortunately this is just a working paper and over the course of the next year, statements can be amended again and again until they are finalized in October of 2015. This isn’t the last we’ve heard on this. Personally, I know few American Catholics who would concur with the anger, callousness, unreasonableness and negativity displayed in this most recent statement.

What’s more, Pope Francis himself was given a standing ovation when he chastised dogmatic bishops at the closing ceremonies, pointing out their “hostile rigidity.” Thank you. Pope Francis may not be able to change much in the world economy or the family, let alone his own church, but he’s making good use of his bully pulpit and he deserves credit for that.

People are talking. We all remember his statement from last year in regards to gay people: “If a person seeks God and has goodwill, then who am I to judge?” In fact, during that same interview, Pope Francis became the first pope to use the term “gay” instead of “homosexual,” which is not only a respectful gesture to LGBT persons, but an important acknowledgment that gay life is a social phenomenon not a medical one. Pope Benedict, as you’ll recall, referred to gay relationships as “intrinsically disordered,” which sounds like a diagnosis. He’s not a doctor of course, though he was a “reluctant” member of the Hitler Youth, which might explain his callousness toward people who don’t fit some “ideal.”

The sad truth is that this synod, thus far, has changed nothing. Still, there are those who are looking on the bright side. Gay Catholic activists were ecstatic when the first statement came out. Marianne Duddy-Burke of Dignity USA exclaimed: “It is undeniable that there has never been any Vatican document that made positive, respectful statements about same-sex relationships, so that is an undeniable breakthrough.”

Francis DeBernardo, executive director of New Ways Ministry, agreed. “Regardless of the fact that this is a working document,” he said, “it is still significant in that it reveals a strong current of affirmative attitudes at high levels in the church towards lesbians and gay people.”

Conservative Catholic groups such as Voice of the Family employed the usual hyperbolic response we’ve grown used to from the right, calling it “one of the worst official documents drafted in Church history.” Really!? In history? What about the Inquisition that sanctioned torture, anti-Semitism and execution for heresy? Oh that’s right, denial.

Pope Francis seems to want to challenge the entrenched and moribund attitudes of an increasingly irrelevant church, and thus make it relevant. In his opening remarks, he asked bishops not to be afraid to speak their minds honestly and openly, and to say things that might displease him. Hopefully as the year progresses more bishops will gather the courage to step up and speak their minds.

Francis is thus leading by example, and by so doing, he might just bring out the best in those around him. In fact, I’d go so far as to say that Pope Francis, just like those gays, “has gifts and qualities to offer to the Christian community.”