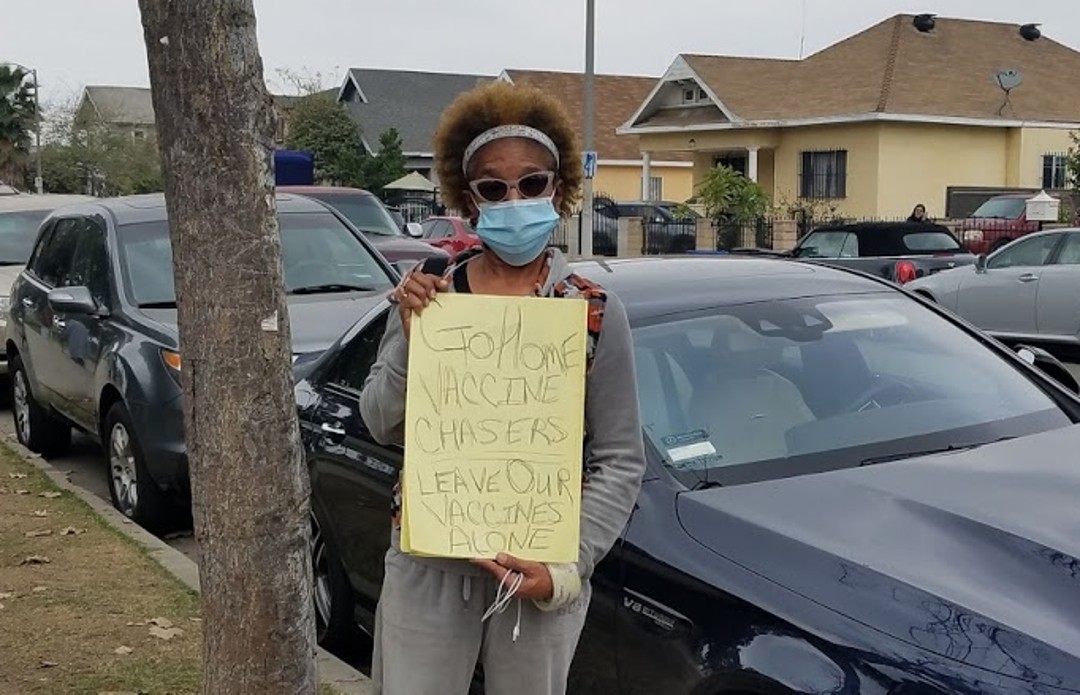 Veronica Sance was irate. For days, she’d been monitoring the sidewalk in front of a prime South Los Angeles COVID-19 vaccination site, Kedren Community Health Center. And she did not like what she was seeing.

“I was here on Thursday, Friday and Monday, and I was the only African American in the standby line,” a situation she described as “horrendous.” After securing a dose of the vaccine for herself, the 60-year-old activist who lives nearby returned the following week with a sign: “Go home vaccine chasers! Leave our vaccines alone!” On this particular day, the line of people willing to wait hours for unclaimed vaccines included a smattering of Asians, Latinos, African Americans, as well as whites.

Community advocates have claimed that when the vaccines first arrived, Los Angeles County lacked the ability to reach deeply into the neighborhoods that had been most affected.

But for weeks, mostly white people with portable lawn chairs and time to spare had claimed those spots, she complained. “How do they know and we don’t know?”

The sight of those young, white “vaccine chasers” camped out in the Vernon Central neighborhood was jarring in a region where the coronavirus has hit Black and brown residents the hardest. But ensuring that the Kedren’s standby line better reflects the surrounding neighborhood won’t be enough to rectify the inequities in Los Angeles County’s COVID-19 vaccine distribution. The county’s effort involves meting out an ever fluctuating supply of doses to a sprawling region of 10 million people. Kedren has administered thousands of vaccines, and by all accounts has gone the extra mile to reach those most at risk of contracting and dying from COVID. The big question in L.A. County is: Why are the Angelenos who are dying most from COVID-19 being vaccinated at such low rates? Case in point, in the neighborhood surrounding Kedren, only 5.5% of residents have been vaccinated. Meanwhile in the affluent community of Bel-Air, 19 miles away, 30% of people have been vaccinated. This may be in part because the South L.A. neighborhood skews younger, making fewer of its residents eligible for the vaccine, despite the fact that the COVID-19 death rate in Vernon Central has been more than 10 times that of Bel-Air. (To date, California has prioritized vaccinating older people, along with health care workers and residents of skilled nursing facilities.)

While COVID-19 case and death rates are declining across all groups after L.A.’s devastating winter surge, Latinos and African Americans continue to get sick and die at much higher rates than white and Asian Angelenos, who are being vaccinated at higher rates. Latinos in the county have been almost three times more likely to die from COVID-19 than whites.

Recommendations for fairly distributing vaccines were developed as far back as October of last year, when the National Academies of Sciences, Engineering and Medicine provided local and national leaders with a framework for dealing with the anticipated scarce supply. In November, California created a Community Vaccine Advisory Committee to make sure “the vaccine is distributed and allocated equitably.” Yet when the vaccines arrived in mid-December, Los Angeles County lacked the ability to reach deeply into the communities that had been most affected, advocates told Capital & Main.

Prioritizing volume over targeted communities has left the neediest by the wayside, as the county focuses on  vaccination sites at Magic Mountain and Dodger Stadium, which are only accessible by car and with online registration.

“It always seems like we’re five steps behind, instead of being proactive,” said Charisse Bremond-Weaver, the president and CEO of the Brotherhood Crusade, a grassroots group in South Los Angeles. Although the county knew that vaccines were coming, it did not set up the systems for coordinating appointments in a way that supports the folks who are the most vulnerable or who might not be technologically savvy, Bremond-Weaver said.

Instead, the county focused on standing up large vaccination sites, like those at Magic Mountain and Dodger Stadium, which facilitated the speedy vaccination of thousands of people but were only accessible by car with online registration.

This strategy of prioritizing volume over targeted communities has left many of those most in need by the wayside. “The inequities we saw with respect to cases, hospitalizations and deaths have been reflected so far in the vaccine administration. This is completely unacceptable,” said Los Angeles County Supervisor Hilda Solis at a February 2 virtual press conference.

Mass vaccination sites are logistically easy to roll out, said Steven Wallace, a professor at the University of California, Los Angeles, Fielding School of Public Health. But “taking the vaccine to where the people are is the most effective way of reaching those harder to reach populations,” he said. And county officials agree.

Paul Simon, chief science officer at the Los Angeles County Department of Public Health, told Capital & Main during a virtual press conference that “early on, it was such a limited supply, and such great pressure to get folks vaccinated as quickly as possible so we weren’t holding on to the vaccine, that I think we did prioritize volume.”  But, the county “pivoted as quickly as possible to making sure that [we had an] equitable distribution,” he said.

Local government is finally launching partnerships long sought by community organizations to bring outreach and services to the most affected neighborhoods.

The County is also tapping community health workers to go “block by block” to provide information about the vaccine. Ten additional vaccination sites were added in East and South Los Angeles earlier this month. With vaccines in short supply last week, the county was prioritizing sending first doses to health centers, pharmacies and other providers in COVID-19 hot spots, according to Simon.

Bremond-Weaver’s Brotherhood Crusade is one of the community groups involved in the county’s newest outreach program, dubbed the County COVID-19 Community Equity Fund. She told Capital & Main that it was meant to launch before the winter surge and vaccine rollout but hit delays. “With bureaucracy it can be a little slow, and that is our concern,” Bremond-Weaver said. “By the time the county or city institute a contract, you’re already months behind.”

Rhonda Smith, executive director of the California Black Health Network, says an education campaign should have begun before the vaccines rolled out, one that dealt with the reluctance to get vaccinated among African Americans and other communities of color who have faced discrimination in the health care system. “There would be a different mindset and attitude about it because people would know and have more confidence, but that didn’t happen,” she said.

Felipe Escobar is the organizing director for Pacoima Beautiful, a nonprofit organization that serves one of the hardest hit communities in the county. He agrees that more of a running start on education likely would have helped. He began educating his own parents, who are in their 50s, during the Christmas holiday and reached out to Pacoima Beautiful members in January. He’s battling concerns about the safety of the vaccine and misinformation that’s ricocheting on social media, especially among young people.

Even painstaking outreach to vulnerable seniors is no match against a privileged and plugged-in population of more affluent residents with all-day internet access and cars.

Mostly, though, the seniors Escobar works with are anxious for the peace of mind that will come with a vaccine. When he spoke to Capital & Main in early February, he had just helped a senior get his first shot at California State University, Northridge. “He’d been on the phone for three hours.” Pacoima Beautiful was also in the midst of hiring five people in order to reach a target of helping 200 people a month get access to shots.

The 56-year-old Watts Labor Community Action Committee (WLCAC) has also been participating in an L.A. city funded program to connect its homebound seniors with vaccines, particularly those located in COVID-19 hot spots. Some contend with a lack of family support systems, transportation challenges and low digital literacy. “Many seniors report they are frustrated and gave up making appointments for the COVID vaccine online,” Phyllis Willis, senior director for older adult programs-senior services at WLCAC, wrote in an email.

It’s easy to see how even painstaking outreach to vulnerable seniors, like Pacoima Beautiful and WLCAC are doing, is no match against a privileged and plugged-in population of more affluent residents with all-day internet access, a car and a willingness to brave one of the large vaccination sites.

But it would be a mistake, too, to paint any demographic group as a monolith. Many African Americans and Latinos have eagerly lined up for vaccines and some of them feel a special responsibility to cajole and coax others to follow their lead. Ann Jackson, a 75-year-old South Los Angeles community leader, got a ride to Dodger Stadium from a younger friend in late January and was awed by the massive operation that involved thousands of orange cones. “I drove around and around and around and around until I got to the station where we were given the shots,” she said. “When we finally got up to get the shot, I didn’t feel anything.”

“The more complex you make the rules, the more people with resources and connections can figure out how to [comply with] those rules.”

Her friend, Pat Payne, 73, has been taking more of a wait and see approach. But she plans to get the Moderna vaccine from her provider, Kaiser, in the next couple of weeks. Both women have been touched by COVID-19. Jackson’s cousin, a retired barber who continued to cut hair during the pandemic, was hospitalized with COVID-19. “Everyone at the barbershop has it,” Jackson said.

Vaccine supply will likely remain tight for some time, even as new and more infectious variants potentially take hold. By March 1, teachers, food service workers and other frontline workers will enter the line for shots in California. By March 15, the state will open eligibility to people 16 to 64 with health conditions that put them at high risk for hospitalization and death. These newly eligible groups will be competing with the county’s seniors, 57.5% of whom have yet to receive the first of two required vaccine doses.

But there is a light at the end of the tunnel. Many more vaccines are expected to come on line in April, and they should be universally available by the end of July, according to President Joe Biden, who spoke at a televised town hall in Milwaukee last Tuesday.

In the meantime, the question is whether those most at risk will get prioritized access to early vaccines. Thus far many states have not done a good enough job of getting vaccines to those most impacted by COVID-19, Ashish Jah, dean of Brown University’s School of Public Health and an expert on pandemics, said during a recent event. Jah doesn’t believe the answer lies in creating more rules about who can get the vaccine. “The more complex you make the rules, the more people with resources and connections can figure out how to [comply with] those rules,” he said.

Instead, the strategy needs to rely on local leaders and organizations to help overcome vaccine hesitancy and logistical barriers, he added. “Use a ground game that uses local community resources, as a way to make sure that people who have color actually have much, much better access.”

An effective ground game at scale costs money and is not yet in place, according to Simon from the Los Angeles County Department of Public Health. “It’s going to really require not just our department getting more funding, but a commitment across multiple sectors to really make this work,” he said.