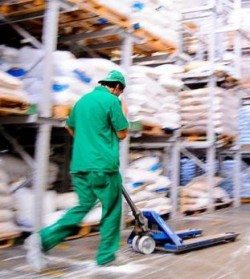 In a new report, University of Southern California professor and warehousing and logistics expert Juan D. de Lara reveals that the local warehousing industry is relying on low-paid, temporary workers at serious risk to the ongoing economic health of the region.

“It should be clear that most blue collar warehouse workers earn far less than the average logistics annual wage of $45,000,” De Lara writes in Work: Path to the Middle Class or Road to Economic Insecurity?, released by USC’s Program for Environmental and Regional Equality. “Any conversation about the future of the logistics industry as a key driver in the Inland Empire’s regional economy should begin with an honest assessment of blue-collar vs. white collar wages.”

While the average logistics wage is often taken at face value, this figure does not factor in temporary workers’ wages nor the wages of blue collar workers employed directly by warehouse operators. According the report: “Blue-collar warehouse workers who are hired directly by a retailer or third party logistics company earn a median average wage of $22,000. Temp workers — who are hired to do the same jobs and work at least 20 hours per week – earn a median income of $10,067 per year.”

Underemployment also drives down yearly income for a large portion of temporary warehouse workers. Approximately 70 percent of all temp workers in warehouse occupations reported working less than 40 weeks (roughly less than 10 months) out of the year. The combination of low wage occupations and underemployment results in wages that fall far below the industry average.

“To put it simply, not enough of the global logistics economy trickles-down to meet the needs of local families. This is especially true when we account for the region’s growing ranks of blue-collar workers.

Walmart, the world’s largest retailer, is one of the major drivers in the creation of low-wage temporary work in the region. Of 11 dedicated Walmart warehouses, nine of them rely on temporary workers.

“After years at talking with warehouse workers, we know that while there are a lot of warehousing jobs in the Inland Empire they are often not quality jobs,” said Guadalupe Palma, director of Warehouse Workers United, which advocates for good warehouse jobs. “Workers struggle to get enough hours and are often paid minimum wage with no benefits. Major retailers like Walmart take advantage of the subcontracting arrangement that dominates the industry. De Lara’s report helps us understand the disparities in the warehousing industry and provides a pathway to improve the region’s economy.”