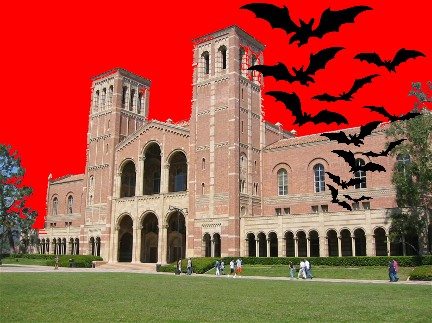 Budget cuts are bleeding the University of California system. Tuition and fees are skyrocketing. Admission rates of California residents declined this year at all but one of the university’s 10 campuses. (California also operates 23 colleges known as state universities.) All this seems a far cry from the university’s trajectory set more than 50 years ago, and it is turning high school students like myself away from the schools that once seemed so appealing.

Now in the heat of college applications season, many seniors are wondering if the U.C.s are worth attending at all. Earlier this week the university’s regents, fearing massive demonstrations,  cancelled a San Francisco meeting scheduled to discuss raising U.C. student fees. Today at Cal State University Long Beach, as protesters chanted outside the chancellor’s office, trustees voted to raise state university tuitions yet again.

When tuition hikes are regular news and corresponding student sit-ins and protests are commonplace, it’s hard to see the upside. However, many high school students remain optimistic about their acceptance at the universities and the U.C.s in general.

“I’m not too worried,” said Tim Rusch, a senior at Santa Monica High, “I’ll do my best on the application and I know they accept a diverse group of kids.”

The modern University of California system was set up by the California Master Plan for Higher Education, the 1960 act that reorganized the state’s colleges into a more inclusive, efficient and intelligent system. The point was to reduce costs, increase graduates, and better prepare California’s students for an economy in which they would soon participate.

Reduced funding from the state government has slowly but surely eaten away at those fundamental principles. Where it once cost $0 tuition for in-state admits in 1961 ($500 for out-of-state), today’s price tag for living on campus at a U.C., including tuition, room and board, and fees for books, etc., is estimated at $31,200 this year alone.  The universities court students from outside California because they pay an extra $22,878 and U.C. needs all the cash it can get. Over the past two years, the Berkeley campus alone admitted 1,881 fewer California residents and 1,894 more out-of-state students — virtually a one-for-one swap.

This tendency to pander to out-of-staters for their increased tuition hurts California’s education and economy. Because fewer Californians attend these prestigious universities, more are forced either to attend a school out of the state (racking up significantly more debt) or settle for a school that isn’t right for them. The result is a generation of young California  professionals chained by financial obligations and lacking the proper educations or opportunities for success.

Fixing this problem will require dynamic, bipartisan action from state government. Taxes must be raised in order to sustain the universities and relieve students of their ever-growing burden. A state tax on oil extraction would be a good place to start, as California is the only oil-producing state that lacks one. With additional state funding, the schools will rely less on out-of-state tuition and philanthropic contribution, and accept more students from California’s high schools.

These are our universities, they are the pride of our education system. We pay for them in taxes and we benefit from their research and ingenuity. It’s time for Governor Jerry Brown to take a page from his father’s playbook and team up with legislators to reform the university. If not, many Californians won’t have the kind of opportunities, educational and economic, that could save both individuals and state government from financial ruin.