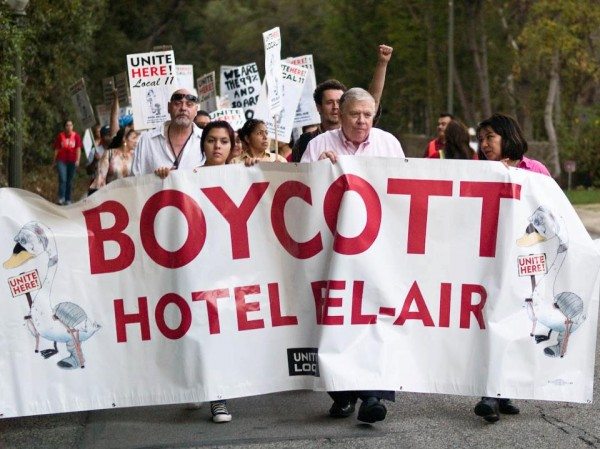 I hung up the phone and got queasy. Leigh Shelton, the press spokesperson for Local 11 had just asked me if I wanted to MC the rally after the protest at the Hotel Bel-Air on Stone Canyon Road.  I’m a dues -paying member of Unite Here, the hospitality workers union, but I never thought I’d be asked to do something like this.

My natural response to doing things that scare me is to say No, and then to inform the person that I would not be the right one for the job, that indeed I might be terrible. My excuse for not wanting to do this was imbedded in a traumatic comedy club experience where I thought I would give the MC position a chance. I can still see a few heckling faces in the audience to this day.

However, Leigh convinced me that it would just involve a few talking points and introducing a few key people. I couldn’t believe it when I heard myself say a defeated, “Okay.”

It was already my intention to go to the protest. I wanted to be there to hold a sign and help the workers get their jobs back.  After a two-year renovation the Hotel Bel- Air had refused to hire most of the workers back to their former positions. Therefore, the union had decided to stage the protest at the Bel-Air’s grand reopening.  I figured a lot of these same workers had supported me when my hotel, the Hyatt Andaz, went on strike, now it was my turn to repay the favor. I also wanted to see the President of Unite Here, John Wilhelm speak to the workers. It just didn’t occur to me at that time that I would be introducing him. Gulp.

I knew I wasn’t going to get any sleep the night before the protest so I had my wife drop me off at City Hall for Occupy L.A. to get some inspiration. Maybe it would jumpstart some ideas. Maybe I would get some more confidence in myself. I’ve been an actor all my life, but my scripts are always memorized. I always know my lines verbatim. “Talking points” seemed so vague and ambiguous. I took an improv class once but quit because I had no idea what to say.  Would Leigh laugh at me if I called her up and asked her if the union had access to a teleprompter?

The General Assembly on the south lawn of City Hall was happening just as I arrived. There were thousands of people. A cross section of society from all walks of life. The first person I spoke with was a woman who was planning on staying the night with her granddaughter.  I asked her if she would sleep okay with all the noise, traffic and police sirens? She said, “I’ll sleep just fine. You sleep fine when you know you’re doing the right thing.”  It made me wonder how the bankers were sleeping.

I found that the speakers I enjoyed the most at the assembly were the people who were visibly nervous but spoke anyway. I couldn’t help but think that I was watching tomorrow’s political leaders. Courage is a beautiful thing to watch in people. If you’ve got passion, you don’t really need a script. The words find your heart and then exit your mouth, and you just have to trust it. That’s what I saw at City Hall.

On the day of our protest we had plenty of support from Occupy L.A. The union had set up around 10 shuttle buses from UCLA to transport us to the hotel, where I had never seen so many cops in all my life. There were also a few helicopters flying above. I wasn’t sure if they were news or for the police. Perhaps both. There were thousands of people there, a great mix of occupiers and union members recognizable from their red shirts. Oh, yes and corporate lawyers, hotel management and a deluge of journalists.

Through the chaos of the crowd, after getting off the shuttle bus, I finally found Leigh, and told her I was ready to go.  She told me I might have to riff a little longer in one spot of the program. I told her it wasn’t a problem. I’d watched people riff and improvise the previous evening at City Hall, and I was sure I could do the same thing now.  Watching the occupiers gave me the courage to get out of my head and into my heart.

I think I’ll sign up for another improv class.

Related Topics:Occupy LA
Up Next