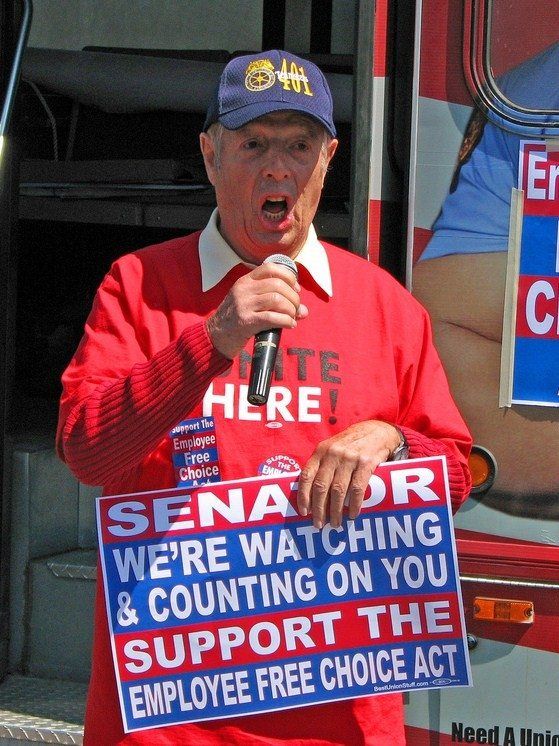 File this under the We Couldn’t Have Said It Better Ourselves Department: Op-ed columnist Joe Nocera articulated on the very respectable pages of the New York Times what many of us have known for years: Unions are good for the economy. Well, no – make that, unions are essential for the economy to work for everyone.  Nocera, the famously contrarian business writer, talks about his picket-line-walking parents and his union-solid Rhode Island birthplace – but how, as a member of America’s post-war educated class, he came to view organized labor “with mild disdain.”

The madeleine that stokes his remembrance of union things past is The Great Divergence, Timothy Noah’s new book about income inequality. After confessing to holding an outlook once similar to Noah’s early views of labor as “a spent force,” Nocera now agrees with him that liberals have turned their backs on unions with terrible consequences. Citing Noah’s claim that the decline of union membership has a neat, statistical corollary in the collapse of middle class incomes, the Times columnist follows up by quoting Harvard economist Richard Freeman’s assertion that the cratering of union membership unambiguously accounts for 20 percent of the present income gap in America.

“This makes perfect sense,” according to Nocera. “Company managements don’t pay workers any more than they have to — look, for instance, at Walmart, one of the most virulently antiunion companies in the country.”

Nocera concludes his column with a line that might have been borrowed from no less a radical economist than Paul Sweezy. “If liberals really want to reverse income inequality,” Nocera writes, “they should think seriously about rejoining labor’s side.”

Far from it, liberals – and even union members – seem to be abandoning and undermining labor. We only have to look at the dismal results of the Wisconsin recall election to see the evidence. There, National Public Radio and others report, exit polls revealed that 38 percent of union-household voters cast ballots to retain the state’s paranoiacally anti-labor governor, Scott Walker. Why this disconnect?

Some union members are solid Republicans, for a host of reasons beyond union identity. “You can’t assume just because a person is a union member, they are also a Democrat,” Kristin Hansen, an Obama campaign volunteer, points out in the NPR piece.

Other union voters, who would previously have leaned towards the Democrats, may be disenchanted with the donkeys. For one thing, the White House has kept labor at arm’s length since the morning after election day, 2008. They barely paid lip service, for example, to labor’s prime directive since 2007 – passage of the Employee Free Choice Act (EFCA), legislation that, among other things, would have made forming a union just a little more efficient – and democratic – by protecting pro-union workers from employer reprisals.

EFCA was nothing radical — it didn’t seek to overturn Taft-Hartley or force company employees to watch multiple screenings of Norma Rae. Getting it passed, however, meant everything to the unions.  Nevertheless, many of labor’s erstwhile congressional allies were too cowed by the conservative assault to lift a finger for the House and Senate versions of the bill.

Finally, labor’s struggle to endure may be a self-perpetuating state. Its losing streak — from EFCA’s death on the vine to the Wisconsin recall debacle — means that unions are now locked in a spiral of existential battles for survival in which every election drains them of resources and morale. Even when unions defeat cynical “paycheck protection” initiatives, they must devote more money and effort to defeat them than the corporatist forces spend kiting these measures. This means unions are doing less of the things – like organizing, standing up against the worst of big business and lifting jobs into the middle class – that would directly benefit the working people whose support is sliding away.

This translates into a grim calculus in which unions are diminished with every election cycle and have less muscle to offer in the fight to retain the White House. While unions remain the biggest source of election campaign money and boots-on-the-ground volunteers in voter drives, they are losing members and clout. As Noah and Nocera suggest, now is not the time for liberals to keep unions at arm’s length, but to embrace them tighter than ever.

After Wisconsin, the Deluge?