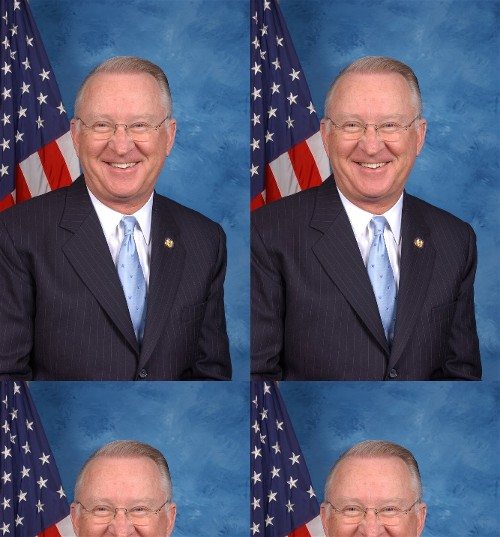 It’s official: Frightwing Congressman Howard “Buck” McKeon (R-Santa Clarita) will have the newly redrawn 25th District all to himself, since  fellow conservative Elton Gallegly announced January 7 that he will not contest the seat – which swallows up Gallegly’s home in the old 24th District. While perhaps not as big a news item as the retirement of the party’s state Congressional delegation leader Jerry Lewis (R-Redlands), Gallegly’s surrender means McKeon, 73, will inherit the cop suburb of Simi Valley (home also to the Reagan Library) and one of the most entrenched conservative strongholds in Los Angeles County.

Buck McKeon’s fiefdom has always been something of an anomaly. The old configuration of his 25th District was a gerrymander-shaped creature that began at the eastern Ventura County Line and stretched across forest and desert to the Nevada border, then swung up along the state line all the way north to a position almost parallel with Sacramento. At 21,622 square miles, it was the second-largest district in the state but only contained 845,000 constituents. As his press office liked to point out, it included the highest/lowest landmarks of Mount Whitney and Death Valley.

McKeon’s legislative record has shown similar inclinations to extremes. The congressman, who chairs the powerful House Armed Services Committee, may not be the most retrograde member of the House, but is certainly close to it. A 2009 fundraising letter sent to party loyalists betrayed the paranoid style of American politics in exemplary fashion. After McKeon blasted the new “socialist” president’s support of the Employee Free Choice Act (“right out of Stalin’s playbook”), McKeon’s wife added that a suspect arrested for the burglary of their home was a man from – Chicago! (Barack Obama is a man. Barack Obama is from Chicago . . .) “Just know this,” Patricia McKeon wrote, “no matter what happens to us, Buck and I won’t back down.”

What’s even more impressive about Buck McKeon is his well-known ability to speak out of both sides of his mouth. A white paper authored by his staff called for the government to protect Medicare and Social Security, but he now says those institutions need “addressing.” He began addressing them by voting for Paul Ryan’s Path to Prosperity proposal, which would have ended Medicare as we know it and replaced it with a voucher system.

McKeon’s bedrock conservatism should be a plug-and-play fit for the newly reshaped district. Still, is his incumbency really a given? After all, the new 25th is far more compact and has lost all those small towns in the distant eastern deserts, towns that may have felt more politically at home with Nevada than Southern California. So he may be finding more aggressive opponents in both his party’s primaries and in general elections – opponents that are not in lock-step with McKeon’s reflexive pro-business, anti-labor stances. Perhaps Elton Gallegly’s withdrawal from the 2012 House race will only be the calm before the storm in the 25th.

Are You Running With Me (for President), Jesus?

Harold Meyerson on the Campaign Trail