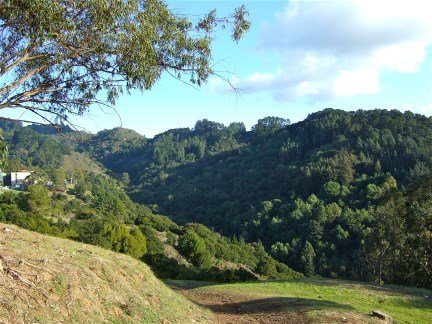 (Editor’s Note: Last week Randy Shaw broke the story, which follows below, about a plan by U.C. Berkeley to use FEMA to clear-cut thousands of trees in the Berkeley-Oakland hills. Shaw’s story provoked an outcry of protest, which he details here, in this followup post.)

The Federal Emergency Management Agency (FEMA) is moving to chop down 22,000 trees in Berkeley’s historic Strawberry and Claremont Canyons and over 60,000 more in Oakland. This destructive plan is rapidly moving forward with little publicity, and FEMA cleverly scheduled its three public meetings for mid and late May while U.C. Berkeley students were in finals or gone for the summer. U.C. Berkeley has applied for the grant to destroy the bucolic Strawberry and Claremont Canyon areas, claiming that trees pose a fire hazard. The school has no plans to replant, and instead will cover 20 percent of the area in wood chips two feet deep. And it will pour between 700 and 1,400 gallons of herbicide to prevent resprouting, Including the highly toxic herbicide, Roundup. People are mobilizing against this outrageous proposal, which U.C. Berkeley has done its best to keep secret.

When I heard this week that the federal government would be funding the clear-cutting of 85,000 beautiful Berkeley and Oakland trees, including 22,000 in historic Strawberry and Claremont Canyon, my initial reaction was disbelief. I then wondered how the feds have money for this destructive project while Head Start and public housing programs are being cut due to the sequester.

The trees in Strawberry and Claremont Canyon have been there for decades and hardly constitute a “hazard.” But pouring 1,400 gallons of herbicide on the currently pristine hills will create a real hazard, and U.C. Berkeley even plans to use the highly toxic herbicide Roundup to squelch the return of non-native vegetation.

This is a true horror story that will happen, absent public opposition. I know that many will find it hard to believe that this could occur in our pro-environment San Francisco Bay Area, but U.C. Berkeley may be counting on this attitude to get all the approvals they need before people find out the truth.

Please read “Death of a Million Trees,” which provides all of the facts, figures and background about the Strawberry and Claremont Canyon proposed clear cutting as well as the tree destruction plans for the East Bay.

The public has until June 17 to submit written comments on the project. You can do so through the Website: http://ebheis.cdmims.com, or via email at EBH-EIS-FEMA-RIX@fema.dhs.gov

There are countless destructive attacks on the environment that Bay Area activists cannot impact. But this is occurring in our own backyard, and activists must make sure that this cannot happen here.

The Next Four Years: A Time to Work on the Environment