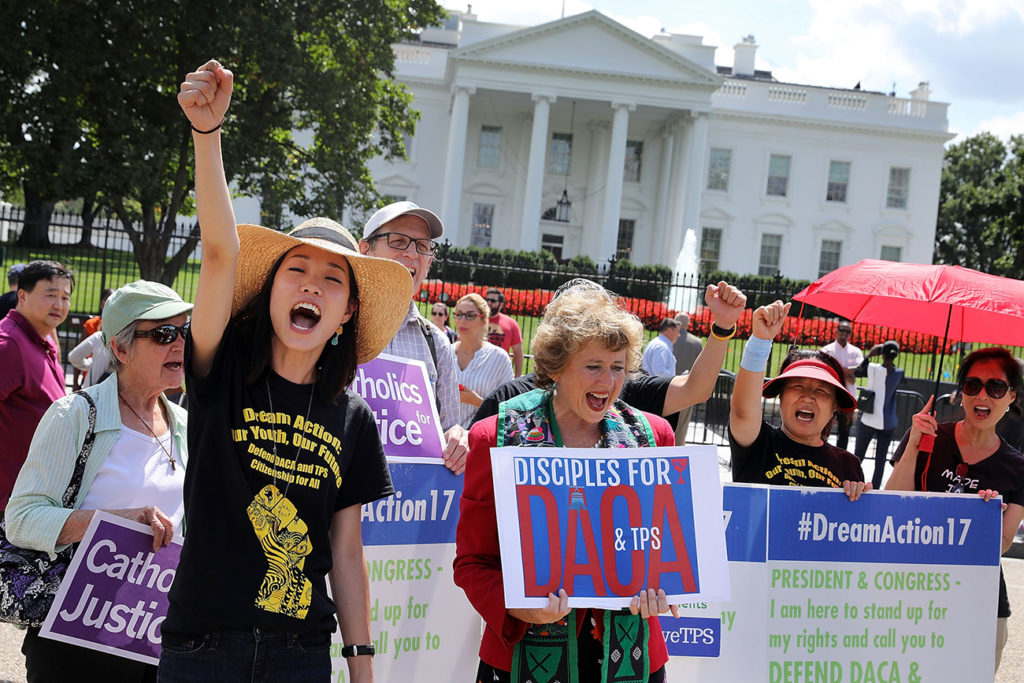 The last few days have been tense ones for 32-year-old Camila (not her real name). Four years ago, she was approved for status in Deferred Action for Childhood Arrivals, the Obama-era program that has granted nearly 800,000 young people who were brought to the United States as children the right to live free from fear of deportation and to work here legally. DACA recipients are required to renew their status every two years.

With weekend news media reports announcing that President Donald Trump would end the program, her reaction was understated. Today those predictions were confirmed by the White House. According to the Washington Post, “The Department of Homeland Security said it would no longer accept new applications for Deferred Action for Childhood Arrivals.”

She had hoped that some of President Trump’s past statements —that he would deal with the so-called Dreamers “with heart”— meant he’d preserve the program.

“I’m very worried, but at the same time, I don’t want to be worried. I don’t want it to ruin my happiness or make myself miserable when good things are happening to me right now. I’m just trying to enjoy the good things.”

One of the best things, from Camila’s point of view, is her job at a biotechnology company.

On weekday mornings she scrubs her hands, dons a head-to-toe clean suit and joins her work team to make a potentially lifesaving new drug. “Manufacturing still feels like a blue-collar job,” Camila said, “but knowing that a product I helped make saves a life is very rewarding.”

She’s moved up fast, earning raises and promotions at two biotech companies in the past four years, and said she’s with her people – mostly science majors who love video games, science fiction and fantasy.

“We are geeks talking about geek stuff most of the time,” she said. Those discussions revolve around TV shows like Daredevil, which is based on a Marvel comic, or Game of Thrones. She goes out with her co-workers after work, and got a season pass to Disneyland, a place that was tantalizingly close but too pricey for her family when she was growing up in Southern California.

In the past four years she’s passed the milestones of adulthood that were previously out of reach. She and her boyfriend of seven years have their own apartment, and with Camila’s help, he’s finally able to study full-time for an engineering degree at California State University, Long Beach. She learned to drive, got her license and plans to buy a car. Camila has dental insurance and finally got some smile-saving root canal work that she had to put on hold for years.

She also watched her younger sister, a photographer who was born in the U.S., walk across a stage to accept a Master of Fine Arts from the University of Wisconsin, Madison last summer.

Camila and her family – who were originally from the Mexican state of Oaxaca – came to the U.S. from Mexico City nearly three decades ago. She was three and only has hazy memories of running near the border and taking a bus trip to Los Angeles with her parents, an older brother and one-year old sister. Their first Christmas was celebrated in a downtown SRO hotel, where her mom made mole, a traditional stew, on a hot plate and the lights kept going out.

“I grew up knowing we were Mexican and American,” Camila recalled. Although her parents would take her to Los Angeles’ La Placita church and to the traditional Oaxacan Guelaguetza festival that draws thousands every year in the city, most of her cultural references – music, TV and movies — are from north of the border.

Camila grew up worrying her parents would be deported, especially when she was in the fourth grade during a wave of anti-immigrant sentiment, when California voters approved Proposition 187. Although much of the ballot initiative was later held to be unconstitutional, its original language barred the undocumented from public schools and services

Later, Camila’s own immigration status threatened to derail her plans for college and a career – even though she graduated sixth in her class of 700 at an inner-city high school.

“Being undocumented felt embarrassing,” she recalled, “because I couldn’t do what the others could and it was something I couldn’t fix. It didn’t matter how well I did in school, I felt I was less than everyone else — I was second- or third-class. It [was] humiliating.”

Despite this, Camila can’t imagine living anywhere else but the United States.

“I see myself as part of this country that I grew up in and love,” she said. “I like that there are all sorts of people here who make this country their home. At my job there are people from Uganda, Somalia, Vietnam. There are Filipinos.”

Camila said she can foresee achieving a new set of goals. “I’d like to own a home. I’d like to end up in a leadership role in the manufacturing of medicines.”

If sheer grit were all it took, the odds would likely be in Camila’s favor, but much depends on U.S. immigration policy.

Camila made it through college – even though it took seven years, working full time at a fast-food restaurant and commuting nearly three hours to and from school by bus from her parents’ home near downtown Los Angeles.

She considered giving up, but at key moments got help from mentors who recognized her achievements. With a glowing recommendation from a high school teacher, she scored a Rotary Club scholarship to get her started in college. Then, Camila said, after she began volunteering in a biology professor’s lab, the professor liked her work so much he wanted to hire her. When he couldn’t do so legally, he sprung for her tuition in lieu of a paycheck.

Now, she said, she’s wondering if she has options.

“It’s like your life is being ripped away from you,” she said. She’d lose her apartment, and might have to work with her dad buying, selling and repairing appliances. It’s a business that barely sustains him and her mom, and she doesn’t want to be a burden.

“I don’t want to think about what I would do.”

She could let her employer know her situation and ask the company to petition for legal status for her. It’s risky, but she noted that other corporate leaders are outspoken in favor of Dreamers.

“I don’t know their politics, but I could find out. Who wouldn’t want to join forces with Google and Warren Buffett?”