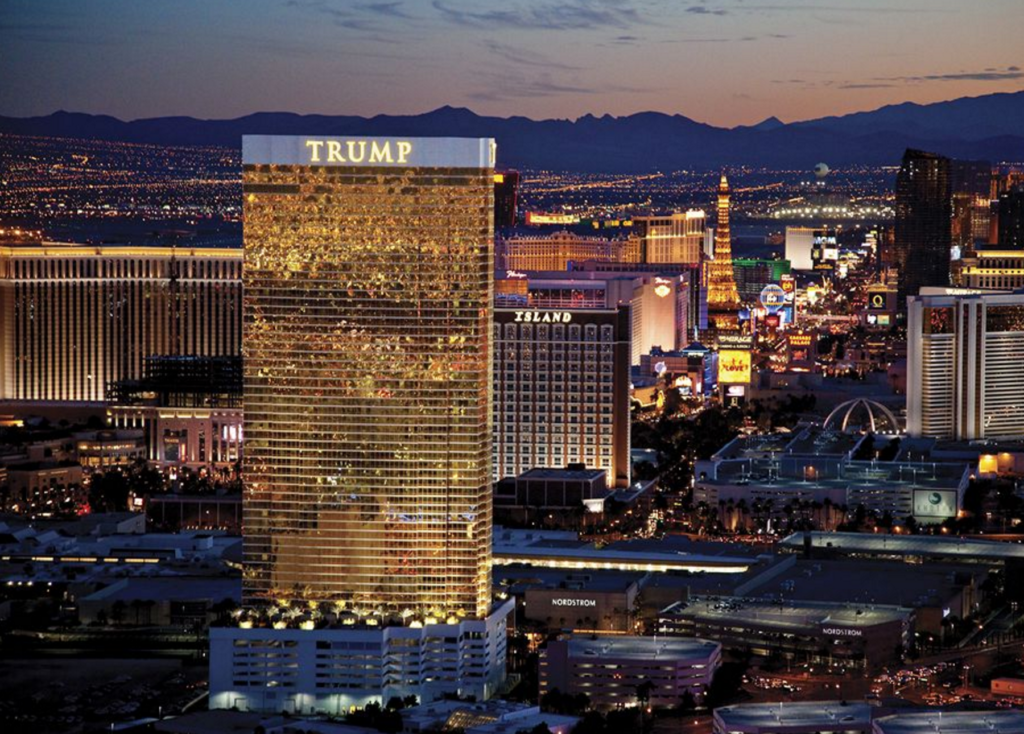 A settlement was announced today between Trump International Hotel Las Vegas and the National Labor Relations Board, adding to the multitude of citations, liens, judgments and lawsuits against its parent company for failing to pay employees and contractors, and for other unfair labor practices. The company must pay $11,200 to two employees, one of whom was allegedly fired for his union support. The other worker, according to the NLRB complaint that led to the settlement, was denied a transfer to a full-time job. Trump International accepted the settlement, which averts a trial before an administrative law judge of the NLRB.

“After years of unfair treatment because I support unionizing Trump Las Vegas, I finally have justice,” Alma Zamarin, a food server at the property, said in a statement.”

The settlement stems from an NLRB complaint issued March 2. In addition to the actions against the two workers, the complaint alleged the company that owns the hotel, Trump Ruffin Commercial LLC, promised more job opportunities to workers in exchange for their abandoning support of their union, a violation of the National Labor Relations Act. More than 500 employees at the hotel were eligible to vote in December on whether to join the Culinary and Bartenders Union. When the unionization side won, the NLRB later certified the union as the collective bargaining representative of employees at Trump International.

The Culinary Workers Union Local 226 and Bartenders Union Local 165 are Nevada affiliates of UNITE HERE and represent more than 57,000 workers in Las Vegas and Reno.

Zamarin says she was treated unfairly for years while she supported unionization—transfer to full-time work is standard with seniority in the industry, according to Professor Harley Shaiken, a labor relations authority who teaches at the University of California, Berkeley, and Bethany Khan, a spokesperson for the union. The NLRB has issued three complaints for unfair labor practices against Trump Ruffin Commercial since organizing began in 2014.

The company was accused of firing or threatening to fire supporters of unionization and maintaining unlawful rules against employees communicating with each other and the public. Some of the complaints are still pending; as part of the settlement, Trump Ruffin Commercial admitted to no violation of the National Labor Relations Act. Repeated emails to the hotel’s media representative requesting comment on the settlement went unanswered.

An investigation by USA Today in June revealed that Trump Organization companies have been sued at least 60 times for failure to pay employees and contractors for their work. The employees ranged from waiters at his resorts to real estate brokers selling his properties–even law firms that represented him in these very suits. Trump companies were cited for 24 violations of the Fair Labor Standards Act since 2005.

Union membership for Las Vegas Strip hotel workers can make the difference between accessing middle class living standards and essentially living hand-to-mouth. “Unions in the Las Vegas metro area, and the Culinary Union in particular, have provided a road to the middle class for [hotel] workers that in many other areas of the country are certainly absent,” Shaiken told Capital & Main. Culinary Union members earn approximately $3 more per hour, on average, than nonunion members on the Las Vegas Strip, said Khan. In addition to higher wages, they receive a “Cadillac” health plan that includes full family coverage and prescription drugs, with no employee contribution, and receive pensions. About 90 percent of hotel and casino workers on the Strip and downtown Las Vegas are unionized.

Under the terms of the settlement, Zamarin must be paid $1,500 for having been denied the opportunity for full-time employment. Her complaint alleged she was discriminated against because she was part of a committee formed to organize workers at the 1,232-room hotel. Although the union she advocated for has been certified, the hotel has engaged in what Khan characterized as “expansive litigation” and a strategy of stalling contract negotiations with the union by appealing every NLRB ruling and judgment against it.

“We see this going on at Trump Hotel and only a few other properties in Las Vegas,” said Chris Griswold, principal officer of Teamsters Union Local 986, which represents around 3,000 hotel workers in Las Vegas. The federal government has ruled in favor of the union and Trump employees every time. “These appeals are a strong job-creation mechanism for lawyers,” said Shaiken, “but they violate the intent of the National Labor Relations Act and years of precedent. It’s a strategy that has transformed the nature of labor relations in the country over the past couple of decades.” The final possible appeal has been filed in Washington, DC and the Culinary Union is waiting to hear if the NLRB decides to hear the appeal or reject it outright.

“Either way, we’re confident the hotel will be legally compelled to bargain with us,” Khan said.

Related Topics:Donald TrumpUNITE HERE
Up Next

No Pardon for Private Prison Industry