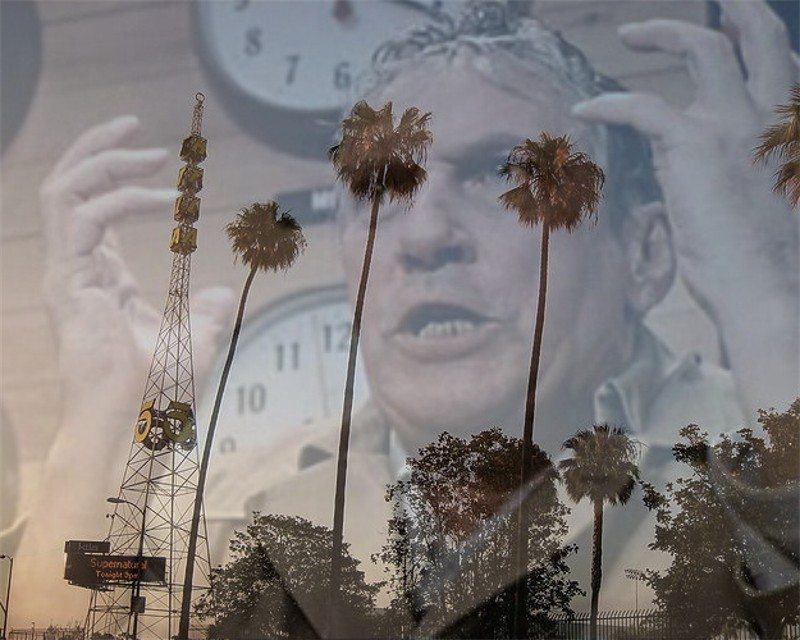 Remember August’s “Tower Guy” story? I happened to be working at the computer that night, when I heard my wife gasp from the other room, where she was watching the evening news.  “Get in here,” she called, “some guy is having a Howard Beale moment!”

Turns out that she was watching KTLA, where police had just arrested someone for climbing Channel 5’s steel tower on Sunset Blvd. in Hollywood—apparently he got some 30 feet into the air before the cops got him down.  Was this some sort of crazy stunt by a thrill-seeker?  An attempted suicide?  A promo for some new reality show?  Who could know?  After all, the blurb in the L.A. Times was content to conclude that “it was unclear why he began traversing the metal tower.”

Of course, the dominant narrative is that the guy must be nuts.  The cops sent a Mental Evaluation Unit.

End of story?  Crazy guy climbs tower for unknowable, crazy reason?  Well, we could just ask the guy.  Before he was shoved into the cop car, he spoke, calmly, to a news camera about the “message” he wanted to send:

“We live in a society . . .  especially my generation and the generation before me – has basically failed me and everyone else in our society.  Everywhere else there’s a revolution going on but [here].”    And then, once ensconced in the back seat of the police cruiser, he smiled and flashed the two-fingered peace sign.  (Watch the video here.)

I dunno.  At first blush, that doesn’t sound too crazy to me.  People around the world do rise up and demand change when they are faced with structural unfairness.  And most of us Americans cheer them on.  And while – in this country – we rarely use the word “revolution” (despite it being a right guaranteed by our Declaration of Independence: Sentence Three of Paragraph Two), that’s a semantic choice.  We have structural unfairness aplenty, when the privileged few control the levers of government, when the tax burden falls most heavily on the working poor, when we have upwards of 16% real unemployment, when we’re poisoning our environment.  Why are we not climbing towers en masse? (Or, for those of us who are acrophobic, why aren’t we getting out in the streets?)

I don’t know what the right response is.  I don’t necessarily advocate climbing any towers.  And screaming out of your window will most likely just annoy the neighbors.  Maybe it will turn out that this guy’s got mental problems after all.  But why is it, when we see someone demanding change, that we automatically assume he’s nuts?  Isn’t it nuts that we so blithely carry on, every day, with the economy and the political world being what they are?  Is it that we’re so enthralled by, as Mr. Beale put it in Network, our “toaster and [our] TV and [our] steel-belted radials”?

Maybe Tower Guy is just mad as hell, and he’s not going to take it anymore.  That’s a start.

Immigrants, Assimilation and the New Economy

Been There. Done That. Now What?