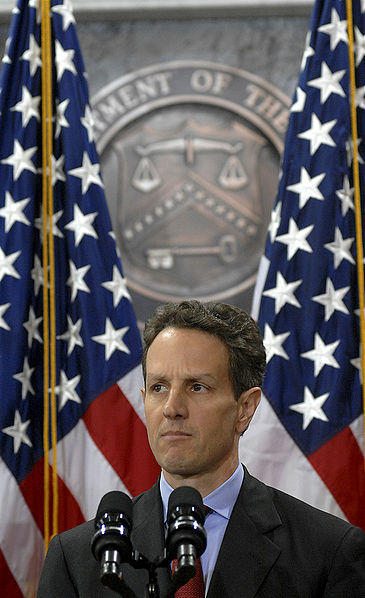 The accolades for Timothy Geithner came on so thick and heavy in the last week that it’s necessary for those of us in the reality-based community to bring the discussion back to earth. The basic facts of the matter are very straightforward. Timothy Geithner and the bailout he helped engineer saved the Wall Street banks. He did not save the economy.

We can’t know exactly what would have happened if we did not have the TARP in October of 2008. We do know there was a major effort at the time to exaggerate the dangers to the financial system in order to pressure Congress to pass the TARP.

For example, Federal Reserve Board Chairman Ben Bernanke highlighted the claim that the commercial paper market was shutting down. Since most major companies finance their ongoing operations by issuing commercial paper, this raised the threat of a full-fledged economic collapse because even healthy companies would not be able to get the cash needed to pay their bills.

It is quite likely that Bernanke could have taken whatever steps were necessary himself to keep the financial system from collapsing even without the TARP. The amount of money dispersed through the Fed was many times larger than the TARP, much of which was never even lent out. The TARP was primarily about providing political cover and saying that the government stood behind the big banks.

Of course we can never know the right counterfactual had the TARP and related Treasury efforts not been put in place, but even if we assume the worst, the idea that we would have seen a second Great Depression was always absurd on its face. The example of Argentina proves otherwise.

In December of 2001 Argentina did have a full-fledged financial collapse. In other words, all the horrible things that we feared could happen in the United States in 2008 actually did happen in Argentina. Banks shut down. People could not use their ATMs or get access to their bank accounts.

This led to a three-month period in which the economy was in free fall. It stabilized over the next three months. Then it began growing rapidly in the second half of 2002. By the middle of 2003 it had made up all the ground lost in financial crisis. Its economy continued to grow strongly until the world economic crisis brought it to a standstill in 2009.

Even if Obama’s economic team may not have been quite as competent as the folks in Argentina, they would have to be an awful lot worse to leave us with a decade of double-digit unemployment, the sort of story that would be associated with a second Great Depression. In short, the second Great Depression line was just a bogeyman used to justify the government bailout of the Wall Street banks.

As it is, the economy has already lost more than $7 trillion in output ($20,000 per person) compared to what the Congressional Budget Office projected in January of 2008. We will probably lose at least another $4 trillion before the economy gets back to anything resembling full employment. And, millions of people have seen their lives turned upside down by their inability to get jobs, being thrown out of their homes, or their parents’ inability to get a job. And this is all because of the folks in Washington’s inability to manage the economy.

But the Wall Street banks are bigger and fatter than ever. As a result of the crisis, many mergers were rushed through that might have otherwise been subject to serious regulatory scrutiny. For example, J.P. Morgan was allowed to take over Bear Stearns and Washington Mutual, two huge banks that both faced collapse in the crisis. Bank of America took over Merrill Lynch and Countrywide. By contrast, there can be little doubt that without the helping hand of Timothy Geithner, most or all of the Wall Street banks would have been sunk by their own recklessness.

There is one other hoary myth that needs to be put to rest as Timothy Geithner heads off to greener pastures. The claim that we made money on the bailout is one of those lines that should immediately discredit the teller. We made money on the loans in the same way that if the government issued mortgages at one percent interest it would make money, since the vast majority of the mortgages would be repaid.

The TARP money and other bailout loans were given to banks at way below market interest rates at a time when liquidity carried an enormous premium. Serious people know this, and the people who don’t are not worth listening to. It was a massive giveaway as the Congressional Oversight Panel determined at the time.

It’s impossible to know whether the economy would have bounced back more quickly and we would be closer to full employment now without the bailouts, since none of us know what other policies would have been pursued. We do know that we would have been freed of the albatross of a horribly bloated financial sector that sucks the life out of the economy and redistributes income upward to the very rich. For that fact, Timothy Geithner bears considerable responsibility.

Related Topics:TARPWall Street bailout
Up Next