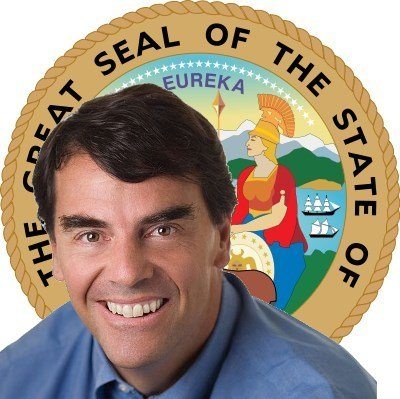 Thank god for wise, visionary billionaires! Until Tim Draper came along, Californians had no idea they were living in a failed state. Here we were, enjoying the illusory benefits of a budget surplus, a booming technology sector and robust political commitments to public education and public health.

But it took a Silicon Valley venture capitalist to remove our rose-tinted glasses. California is so big a hellhole, in fact, that Draper spent nearly $5 million to buy 1.3 million petition signatures – more than enough to place on the 2016 ballot a measure to break up our giant state into six teeny weeny ones. You see, California is such a dysfunctional mess that only dividing it in two will not fix it.

Cynics, of course, may see in this wealthy provocateur’s proposal to Balkanize California an ulterior political motive: to carve out of the new configuration four sparsely populated Republican-leaning states, each of which would be entitled to two U.S. Senators. Prior to Draper’s brainstorm, California conservatives had merely fantasized about splitting the state in two, along its liberal coastal West and its far more libertarian East – carving out a kind of rightwing caliphate along the Sierras and Central Valley.

Draper’s jigsaw map would give us, instead, new states named Jefferson and Silicon Valley, along with North, South, West and Central California – whose governments, he says, will have to “compete” for citizens and businesses. This is not simply money talking, it is money talking in its sleep, expressing the right to remake the world in its owner’s image when the owner feels the world isn’t respecting his power.

“Nearly ungovernable” may strike voters as a little odd, considering the conspicuously calm and orderly legislative process that’s ruled Sacramento since 2011. Could it be that by “ungovernable” Draper means the state’s elected representatives are “unresponsive” to his libertarian philosophy? A clue might be found in these further lines from his ballot proposal:

“Vast parts of our state are poorly served by a representative government dominated by a large number of elected representatives from a small part of our state, both geographically and economically.” This is where Draper lets the cat out of the bag and his initiative becomes the Port Huron Statement of the alienated rich. According to Draper, vast parts of California (its deserts, mountains and trackless forests) don’t have as big a say in decision-making as the places where most people live. Note, too, how his phrasing recasts majority rule as a bizarre distortion of human relations, in which government is “dominated” by “large numbers” of legislators hailing from “a small part of our state.” Suddenly democracy sounds . . . undemocratic.

This isn’t the first time Draper has commandeered the political spotlight. According to the Los Angeles Times, he and his father spent $23 million on a 2000 ballot measure to provide government-funded vouchers to private-school children.

Forget the likelihood of Draper’s fantasy ever winning voter or federal approval. Despite turning in nearly half a million more signatures than necessary, his dream states may never even get put before the electorate. California’s Secretary of State has been running random checks to validate the signatures and, as of August 12, just under 67 percent of the checked signatures have panned out as valid. If this percentage holds, the measure will not qualify for the ballot. Perhaps worse for Draper, these signatures have mostly come from the state’s most rural and mountainous regions – where, supposedly, the fever for his unregulated, competitive Shangri-La runs highest.

Still, there’s always a chance that his measure will make it to the ballot – if so, the two years leading up to November 2016 will win Draper immeasurable free publicity and pundit soul-searching. There is also a danger that it will somehow seem a little less crazy to the media the next time it appears. Who knows – in 2018 we may see a similar initiative attempting to slice California into only four or even just two states, and suddenly Draper will seem like a farsighted statesman and not a crank with too much money.

Fear for the First: Is Activist Speech Terrorism?