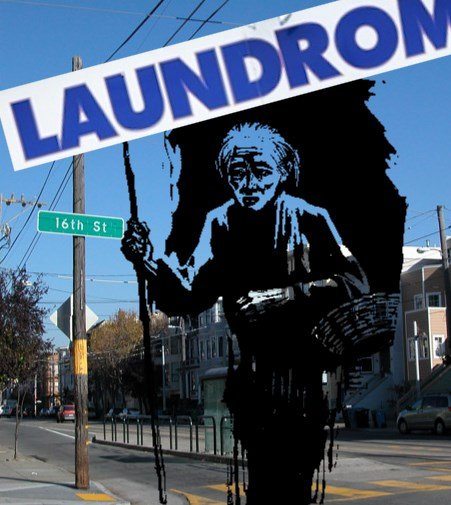 (The New York Times’ Thomas Friedman fancies himself a prophet who can foresee the future. Just look at his recent column on the “Sharing Economy” to see what the future has in store for us. Not good enough? I’ve studied Friedman’s ways and also learned to see the future. In fact, I’ve gotten so good at it that I’ve already written his next column.)

Bill Richman and Teddy Wealthman were San Francisco roommates with a problem.

“We worked all the time at our well-paying Silicon Valley jobs,” Bill recently told me, “and didn’t have time to do our laundry.”

So Bill and Teddy got an idea. While walking down 16th Street in San Francisco’s Mission District, on their way to get a $6-dollar cup of single-origin, private pour-over coffee, the two men spotted an elderly woman coming out of a laundromat, struggling to push a basket of laundry down the sidewalk.

“Bill and I looked at each other and knew immediately that we’d spotted the next new new next thing,” Teddy says, his eyes lighting up with dollar signs.

The two men ran back to their two-bedroom flat, which costs them $4,000 a month, and gathered all of their laundry, as Teddy explains. “Then we shoved it into the old woman’s hands and told her to go to work!”

Teddy and Bill paid the old woman five dollars to do their laundry. A few days later, they did it again. And then they told their friends. And the old woman told her friends. Pretty soon, “the old lady and all of her friends were doing our friends’ laundry.”

Bill and Teddy realized that they could disrupt the entire underground economy of low-paid, often undocumented laborers working for the One Percent. So they quit their highly lucrative day jobs and launched a website called MeWashieWashie.com. The name is a tribute to the woman the pair ran into that first day on 16th Street.

“She was Mexican or something,” Bill says. “But the idea of a Chinese laundry seemed funny to us. So we changed her ethnicity.” Go to the website today and you’ll find a cartoon image of a hunched Chinese woman with boxed feet wearing a conical bamboo hat, whom Bill and Teddy affectionately call “The Washie Washie Woman.”

Today, MeWashieWashie has put more than 10,000 members of the One Percent in touch with thousands of mostly elderly, low-skilled laborers who do their laundry. And while this seems simple enough, there’s something more going on here. Trust? Not quite.

“It’s more like classic exploitation,” says Teddy, as he chomps on his signature cigar. “They are desperate for work. So we throw them some crumbs – albeit artisanal sourdough boule crumbs.”

And if those crumbs should remain in the laundry, Teddy and Bill came up with a solution for that. Users rate their launderers. Fail to get that Cabernet stain out of a silk blouse and you could find yourself out of work.

As I’ve argued countless times, in dozens of columns and books that all essentially say the same thing, average is over. So what is one to do if she doesn’t have the means to afford private tuition for skills training and can’t get a $100,000-a-year job as a Silicon Valley MarkComm manager? (A job, by the way, that I can assure you is held by no people of average skills.) Well, you can take in laundry. In fact, Teddy and Bill proudly point to internal data that show that 100 percent of people taking in laundry on their website do so in order to pay for rent, heating, electricity and—if they take in enough—food!

What began as a simple problem—overworked, highly paid Silicon Valley employees not having the time to wash their Banana Republic clothing—turned into a great idea. Turns out there’s a laundress residing in all of us! (Or downstairs from us.)

(Lowell Goodman is director of communications at the Service Employees International Union, Local 721.)