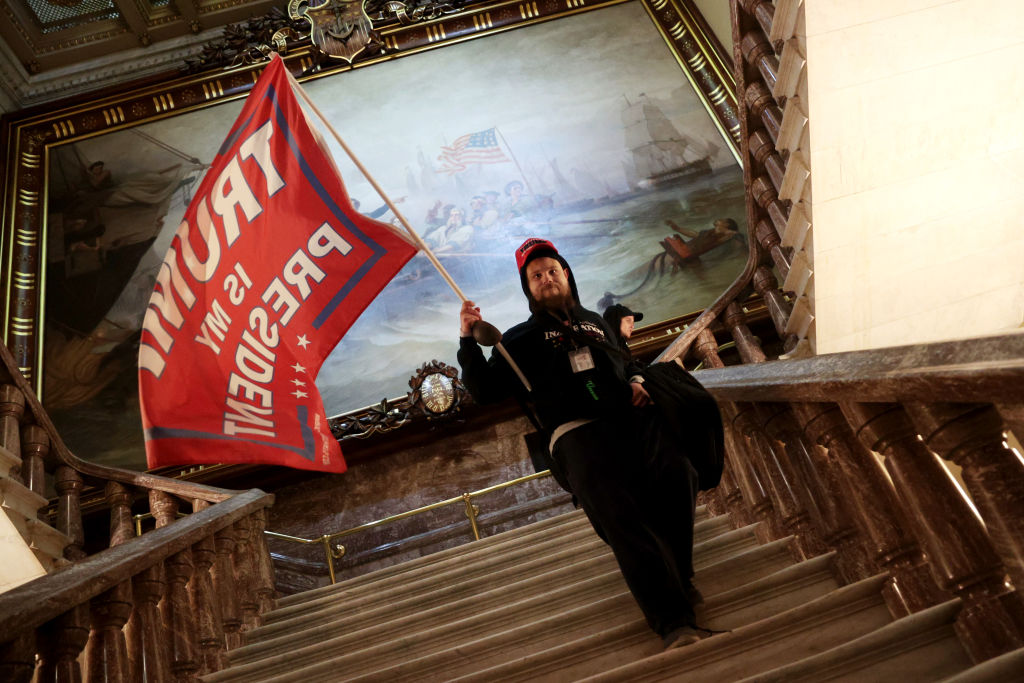 Rioter inside the U.S. Capitol. (Photo by Win McNamee/Getty Images)

This story originally appeared in the American Prospect.

Donald Trump’s presidency climaxed today with the definitive expression of what it’s always been about: one man’s psychopathic narcissism and his appeal to a pathetic lumpen proletariat (a lumpen overclass, too) that he could restore the white male Christian supremacist order of yore by any means possible, and the obeisance of Republican elected officials and right-wing media to his diktats and the pressure of his supporters.

I wasn’t surprised in the least by today’s both tragic and farcical insurrection; it’s the entirely logical consequence of everything that Trumpism has always been about. I was surprised by the fact that security forces, beginning with the Capitol Police, were surprised by it. Anyone who’s been around a Trump rally (or such antecedents as a Pat Buchanan rally or a George Wallace rally) has experienced the sense of barely suppressed violence that pervades such gatherings, the sense of rage that the old order is giving way to a new one in which the unearned supremacy of the groups personified by his attendees has begun to give way. Trump has been adept at stoking and riding that rage into power, and now that he’s been turned out of power by the electorate, his only response has been to stoke that rage even more. Today’s attack on the Capitol was not only predictable; it was the very quintessence of Trumpism.

It’s not clear, as I write, when Congress will reconvene to continue what should have been an entirely symbolic performance, the acceptance of the certified electoral votes of the states. When it does, it would behoove the dozen Republican senators and 100-plus Republican House members who’ve challenged the election results without a scintilla of evidence to back up their challenge to sit down and shut up. Whether it was idiotic delusion, fear of being primaried, or hope to claim Trump’s base in the 2024 GOP presidential primaries (we’re looking at you, Josh Hawley and Ted Cruz) that motivated them, they are responsible for today’s sacking of the Congress, second only to Trump himself.

But they are hardly alone. Mike Pence and Mitch McConnell may have jumped off the Trump train today, but this was a last-minute leap after four years of sticking like glue to this tin-pot wannabe. They were representative of thousands of Republican elected officials who suppressed their knowledge or suspicion that their president was psychologically and morally unfit to govern anything, much less the most powerful nation on Earth, that his models for leadership were autocrats past and present. They were abetted by Rupert Murdoch’s media empire and other right-wing ilk, and Trumpian “intellectuals” like Hugh Hewitt who contended that the conservative victories of the Trump administration outweighed its downsides.

There’s no clear antecedent in American history for today’s Capitol riot, but we do know how other televised riots have played out in our politics: with electoral backlashes. Following the uprisings of the 1960s, cities turned to law-and-order politics and policies. Following the demonstrations and police riot at the 1968 Democratic Convention in Chicago, the Democrats, already divided by the Vietnam War, lost the support of political independents, and but for Watergate would have lost control of government for the next 24 years. (Thanks to the post-Watergate presidency of Jimmy Carter, they only lost it for 20 of the next 24 years.)

Today’s failed Trump coup will almost surely have similar effects. As Tuesday’s Senate elections in Georgia made clear, Republicans have already estranged the suburban center-right voters who’ve kept them in power for years. I suspect that today’s smashing of Capitol windows and driving of Congress from its work will accelerate those voters’ flight from Republicans after today, and while the party’s Trumpian base will remain largely intact, the Republicans will become a party of all base and no periphery. Couldn’t happen to a more deserving bunch of guys.