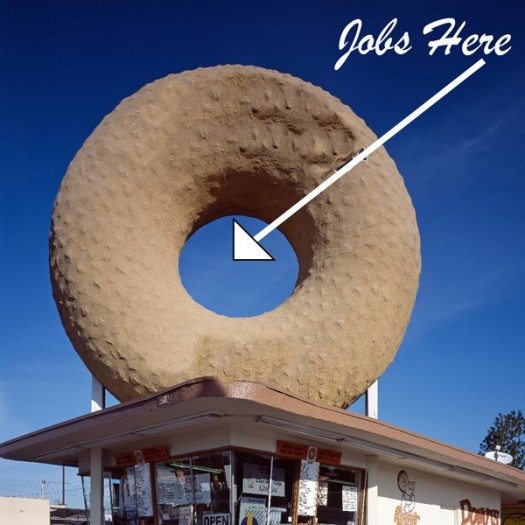 Where are the good jobs going? (Photo: Carol M. Highsmith)

I grew up on the western edge of South Central, near Century Boulevard and Van Ness Avenue. My block was full of local government workers—sanitation, probation, school district. I don’t know if the private-sector folks were unionized, but their wages were competitive enough to allow them to buy houses in the area, a scenario made possible by the standards set by unions that, from my perspective, were becoming mainstream. Part of that standard was hiring blacks as a matter of course.

It hardly needs to be said that today’s focused attack by the Right on unions all over the country is an attack on the working and middle classes. Public employee unions are the big target now because the private sector unions have frankly become too puny over the last generation to pose much of a threat any more to the corporate powers that be, which have expanded as rapidly—more rapidly, actually– as unions have dwindled.

But what gets said much more rarely is that just underneath this attack is another focused attack on black workers who have relied heavily on unions for entrée into not just jobs, but into the kind of long-term financial stability that history and institutionalized racism had long denied them. Of course unions themselves had once been part of that denial by keeping blacks out of their ranks or on lower membership tiers; some of their racial barriers didn’t come down until the 1960s.

But from that point on African Americans could more or less expect the kind of equal treatment within unions that was proving so elusive in the larger society. As members of a collective bargaining unit they were part of a nominal brotherhood that offered them equal access to benefits, pensions, seniority rules and the like.

Getting hired in the first place was still the biggest hurdle, the place where theory and reality collided and where it often still collides, especially amongst trade unions. But there’s no doubt that unions gave its black rank-and-file a sense of security about their employment and their place in the labor force that they had not enjoyed before. It was a security that built up working-class — but stable  — black  neighborhoods like mine.

In 2011, it’s distressing to see how far this trend has slowed – and even reversed itself. In this so-called post-racial (almost post-union) age, nobody thinks of black inclusion as an issue any more, let alone a  moral or ethical question. Story after news story reveals that the great  recession has hit black Americans the hardest, exposing the always tenuous  underpinnings of the black middle class that we’ve been boasting about for years and some have actually used as an argument against addressing a black work crisis that never went away.

Today I live a couple of miles away from my childhood stomping grounds, in a predominantly black Inglewood neighborhood that was once also a bastion of black stability. Rocked by foreclosures, absentee home ownership and a declining tax base that’s threatening to melt down our school district, the neighborhood is trying hard just to hang on to what it had ten years ago, in the supposed boom times.

The only union guys I know are retired, and the full-time working folks are hard to come by. The sense of community and security afforded by unions feels like a distant memory. Though my neighborhood looks peaceful and at points idyllic, the black populace is spending its time not resting or imagining the future, as I did as a kid, but just getting by. And at some point “getting by” will feel like a luxury. And then what? Literally, I can’t imagine.

Anatomy of a Strike