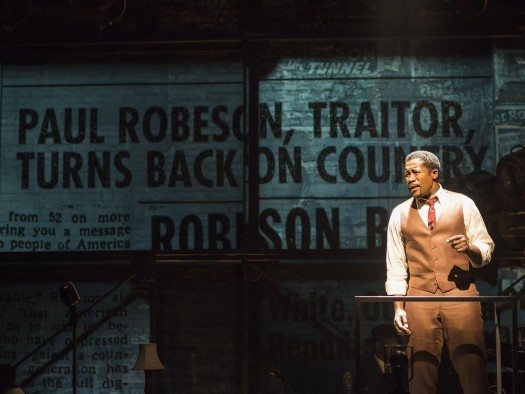 You’ve heard him sing Ol’ Man River, but you may not know his name or that he was a left-wing activist. As mentioned in the program notes for the one-man show The Tallest Tree in the Forest, now playing at the Mark Taper Theater, “the most extraordinary thing about Paul Robeson’s life is that more people don’t know about it.”

For that we can thank the House Un-American Activities Committee that questioned Robeson’s loyalty and effectively destroyed his career, along with the careers of hundreds of other American radicals of the 1940s and 50s. And what a career it was. The son of a father born into slavery, Robeson excelled in collegiate sports and academics and, after earning a law degree from Columbia University, joined the Harlem Renaissance and became a brilliant stage and music performer. Robeson developed a worldwide following with his powerful renditions of Negro spirituals and later with his performance of Othello in New York, as the first African-American to play the part.

But what was even more notable about Paul Robeson was his politics. He was an unabashed leftist who saw the necessary connections between fighting racism and fighting against the exploitation of working people. He championed labor unions and led an anti-lynching campaign after World War II, joining with the children of immigrants to build one of the first multi-racial mass movements this country had ever seen. He envisioned the Soviet Union as a society that truly erased color lines and, despite his knowledge about repression of artists and Jews, amongst others in Russia, he never spoke out against it, apparently fearing his comments could help fuel the Cold War.

Playing through May 25th, the performance by Daniel Beaty (who also wrote the script) goes a long way in introducing the extraordinary accomplishments of this gifted and principled, if not always strategic, African-American performer and activist. It seems like a labor of love, and the audience appreciated it, filled as it appeared with many who shared Robeson’s activist commitments.