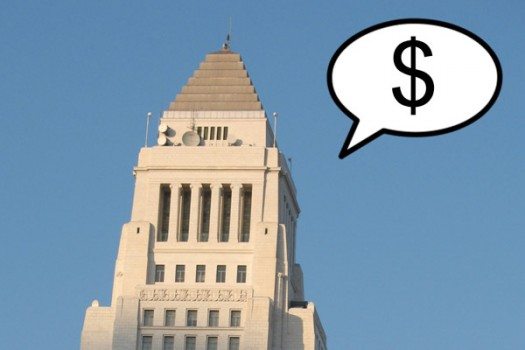 My name is James and I’m a registered lobbyist. It’s been 24 hours since I last lobbied.

I don’t especially mind being designated a lobbyist, and on occasion I’ll even introduce myself that way. Even still, the moniker feels a bit strange. After all, I don’t meet anyone’s standard definition of a lobbyist — a paid flack for various and sundry rich interests.

For this reason, I’ve long resented having to register, but recently I started wondering why we ask even the real lobbyists (i.e. the paid flacks) to register.

The City of Los Angeles requires that anyone who speaks to city officials advocating for something for 30 hours within any three month period must register. Currently, there are 350 lobbyists registered with the City, just over 23 for each council office. Together, these 350 work for 157 lobbying firms (including my nonprofit, the L.A. Alliance for a New Economy), and represent 880 clients (of which LAANE is also apparently one).

The purpose of this system is pretty simple — to ensure that councilmembers aren’t confused about who is telling them what. That makes this a pretty rare disclosure requirement, in that the protected class in this case is not the general public but misguided and uninformed elected officials.

Depending on your perspective, this particular subgroup of electeds may seem rather large, but in this case I’d wager councilmembers are pretty knowledgeable. Has any city councilmember ever met with a lobbyist who was telling them to support a development and not assumed the lobbyist probably worked for the developer? Has any lobbyist ever not explained who their client was or hidden their role? I’ve heard of it once, and I feel confident nobody was fooled (see here).

In LAANE’s case, the requirement is even sillier, since we have no clients, and our interests are pretty evident; the same is true of the Chamber of Commerce.

As lobbyists, we have to register and pay a fee, which costs LAANE several thousand dollars a year, and we have to provide quarterly reports on various things, which in LAANE’s case are irrelevant since we don’t do those things. One of them is  donations to candidates, which gives me a great reason  to not give money. There are also several prohibitions, the most interesting of which is that we are barred from introducing an ordinance for the purpose of being hired to oppose it.
One of the things lobbyists are required to report is any money given to or spent on city officials. In other words, if I give a city official a gift, I need to report it.

This seems like a useful function, since it requires disclosure of potential special benefits granted to city officials, and thus prevents bribes, or the perception thereof. And indeed, according to the City Ethics Commission, lobbying firms have given over $4 million in money or gifts since 2003.

That’s a lot of money, and might make you wonder about corruption. The problem is, $3.7 million of that money went to 3 people. Two were commissioners employed in their private lives by lobbying firms, while the third was a lawyer who left a private firm and went to work for the city and got his partnership payout. In other words, none had anything to do with lobbying expenses. And all this information had to be disclosed by the three people anyway under other ethics rules, so we learn nothing by the requirement.

The remaining few hundred thousand dollars were all expenditures under $1000, where a lobbyist picked up lunch for someone or invited someone to a fundraiser and comped their ticket (which isn’t allowed anymore anyway).  Good information, except that this also duplicates disclosures required of councilmembers.

My point, I guess, is that lobbyists (like me) must be freed from the tyranny of silly disclosure forms. There is an association of lobbyists and it seems to me that they should take this up. Perhaps I can get myself hired to lobby on their behalf. Since I’m likely one of the lowest paid lobbyists in the city, I could use the cash. Of course, if I  opposed their proposal after writing this post, I could be prosecuted under the lobbying ordinance.

I’ve been asked by my editor (and who knew blogs had editors?) to not just lightly mock the system, but perhaps suggest an alternative. I  take my guidance in these matters from former Daily Newser Ron Kaye, who wrote that lobbyists should be emblazoned with a scarlet letter. Red’s my color, so I’m in.

In all seriousness, there’s no doubt that nonprofits should be treated differently, either exempted or allowed a reduced filing fee, but frankly, I’d drop the whole thing. Let lobbyists be free to hide and obfuscate, and put the focus where it should be—on the elected officials who actually make the decisions.