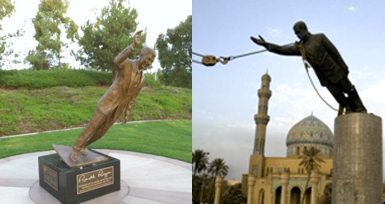 Zombies have long provided both escapist fare as well as incisive social commentary.  Romero’s Night of the Living Dead (1968) dealt with race relations in America, while his Dawn of the Dead (1978) addressed American consumerism.  We’re currently going through another zombiessance, and while AMC’s The Walking Dead may not be Exhibit A, it may be the apotheosis of the current zombie moment.  (Or at least it was in season one; don’t get me started on how disappointing this current season has been.)

The show examines how we (re-)build some semblance of a civilization in the wake of a horrifying event that has decimated the country.  At its best, it’s filled with the tension that marks a bare struggle for survival; it never lets you forget that death (and worse) is ever-present.

In a recent episode (minor spoiler alert!), our band of survivors has found that a zombie has contaminated a well they’re using for drinking water.  To salvage the well, they throw a rope around the zombie and try to drag it up out of the well.  Things do not, shall we say, go as planned.

On the same day that AMC aired this episode, someone else was throwing a rope around a different dead figure that continues to bedevil us.  As the L.A. Times reported:

“Police and politicians were scratching their heads Monday over why someone tried to topple a Ronald Reagan memorial bronze from its spot in a Newport Beach park.  According to authorities, someone lassoed the statue and hitched it to a pickup early Sunday. The theft was foiled when the rope or chain slipped off as the pickup pulled away.”

First of all, let me say that I have an ironclad alibi for my whereabouts early on Sunday.

Though the trend in the country these days is to deify the Great Communicator, not to tear him down, it’s not hard to imagine a political motivation for this.  Or it could be simple vandalism.  But there’s another possible explanation put forth by the Times: “because of skyrocketing metal prices, copper thefts have surged nationwide.”  Recently, thieves made off with a 5,300 pound church bell from St. Mary’s Cathedral in San Francisco.  Two men in Pennsylvania took apart an entire 15.5 ton, 50-foot-long steel bridge and sold it for $5,000.  Both of these thefts — along with a proliferation of less dramatic ones — happened just within the past month. There is an economic desperation in our country.  And there are a variety of responses.  Some people are organizing and occupying, trying to effect broad change in concert with others.  Others — those arguably staying more true to the American tradition of rugged individualism — are stealing whatever of value they can get their hands on.  We’re not likely to find out whether the damage done to the Reagan statue was political or something more prosaic, but I like to imagine that it was a perfect mix of the two.  That some metal thief was making a list of targets and hit upon a statue of the man as responsible as anyone for growing inequality, for a politics of divisiveness, for an obscene “trickle-down” economic vision.  A fitting tribute, the thief might have thought.  (It’s unfortunate that our thief didn’t have the U.S. Marines and careful stage managers to help out.  That, after all, is how we usually like to tear down statues.)

Yes, to paraphrase Faulkner, the dead aren’t really dead.  Whether it’s the ghost of the Gipper, the insurgency in Iraq, infected ex-people, or ridiculous economic ideas, the removal of an icon doesn’t remove the effects we continue to live with.

And I’ll admit to more than a little bit of visceral satisfaction, as I drank my morning coffee and read the paper, at Reagan’s sorry, off-kilter state.  Just like The Walking Dead’s T-Dog must have felt some visceral satisfaction at smashing in the head of the zombie that invaded the well.  But visceral satisfaction only goes so far.  Much as our band of survivors found with their zombie, it’s simply too late to keep Reagan from poisoning the well.

Comrade Carol: Our Gal in Havana