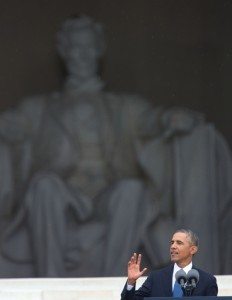 Here’s a tip from a retired newspaper scribe turned history teacher: Look no farther than late 1860 and early 1861 to find historical parallels to our current crisis.

The white, mostly Democratic, slave state South had an almost pathological hatred for Lincoln and his anti-slavery party.

Before the voters went to the polls on November 6, 1860, Southern politicians and newspaper editors warned that the slave states would secede if Lincoln won. (Eleven of 15 did; Kentucky, my home state, and Lincoln’s, did not.)

Today, many, if not most, House Republicans, and more than a few GOP senators, hate Obama to the point that they are willing to push the country into default and risk wrecking the economy over the Affordable Care Act, his most important legislative accomplishment. A lot of those Republicans are white Southerners.

Southern Democrats saw Lincoln and the GOP as a dire threat to their “civilization,” which rested on white supremacy and slavery. They were certain that slavery was doomed when Lincoln and the Republicans took charge in Washington.

The Southern Democrats tried to delegitimize Lincoln’s election because he carried only the northern free states. Lincoln’s name wasn’t even on the ballot in 10 of the future 11 Confederate states, not that he could have carried any of them anyway.

Today, many Republicans – notably those who tilt toward the Tea Party – don’t really accept Obama’s presidency as legitimate. “Birthers” still claim he wasn’t born in the U.S. He was, of course, and, like Lincoln, won two terms fair and square.

In the end, the Southern Democrats led their region out of the Union and formed what South Carolina, the first state to secede, lauded as “a Confederacy of Slaveholding States.”

Never mind that Lincoln had won in 1860 on a platform that compromised on slavery. Abolitionist Republicans demanded an immediate end to African American bondage. But the platform only opposed the spread of slavery into the western territories. Lincoln did not call for the end of slavery in the slave states.

Likewise, the ACA is compromised legislation. Many Democratic lawmakers and traditionally liberal Democratic constituencies – including many of us who pack union cards – preferred a single payer system that guaranteed health care for all citizens.

Modern “fire-eaters” include Obama-bashing Senators Ted Cruz and Mike Lee. But “establishment” Republicans like Senate minority leader Mitch McConnell and House Speaker John Boehner are hardly less charitable toward the president and also are eager to overturn the ACA.

The difference between the fire-eaters and the establishment Southern Democrats was stylistic, not substantive. The same seems to be true between the likes of Cruz and Lee and McConnell and Boehner.

Only time will tell if House and Senate Republicans will meaningfully compromise with the president, reopen the government and avert default.

Meanwhile, some Tea Party Republicans are bragging that default might not be such a bad idea. Almost every reputable economist on earth stoutly disagrees.

The Southern Democrats claimed disunion wouldn’t bring on Civil War. Senator James Chesnut of South Carolina offered to drink all the blood shed as a result of the secession, historian James M. McPherson wrote in Battle Cry of Freedom: The Civil War Era.

The Civil War was the bloodiest war America ever fought.

Anyway, McPherson and other historians have well documented the fact that the white South demonized Lincoln because he was against slavery.

Of course, current Republican politicians – especially Southern white ones — hotly deny that racism has anything to do with their deep disdain for Obama. They vow they never play the race card against the president.

“The tactic of exploiting white racism in order to garner votes is a time-honored Republican tradition,” Walter Bragman recently wrote on Huffington Post. “And it is this very tradition that a successful black president threatens.”

He added, “Barack Obama is an experiment, and if successful, he will deal a crippling blow to old stereotypes and prejudices that exist in America; the same ones the GOP rely on. In the 2012 election, the president lost the Southern states and still managed to win a landslide victory. The South, and to a greater extent the GOP, now finds itself politically marooned. And so to ignore this motivation as even a possibility borders on intellectual dishonesty.”

Getting back to the idea that racism is motivating the Republicans in Congress, I should mention that the Southern Strategy does not inherently make Boehner or the Tea Party caucus racists. What it does mean, however, is that many of the actions taken by elected GOP officials are efforts to appease the racial viewpoints among the voting base. That being said, one cannot simply reject the possibility that any of those elected officials are in fact racist.

How CH2M Hill Is Outsourcing the Future

The Next Shutdown: Voting Booths?