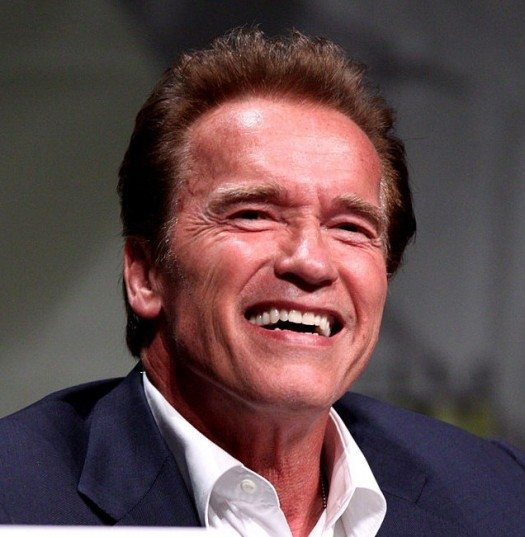 Among the puffier news stories making the rounds today has been Monday’s unveiling of a portrait of former Governor Arnold Schwarzenegger by painter/photographer Gottfried Helnwein. (The artist’s other subjects have included singer Marilyn Manson and Schwarzenegger’s fellow Austrian, Adolf Hitler.) The portrait is a giant, hyper-realistic yearbook image of a smiling Schwarzenegger, backgrounded by a ghostly outline of California’s state seal. It will hang in the Capitol next to a wildflower landscape occupied by a more modestly proportioned Gray Davis, the man Schwarzenegger replaced after the 2003 recall election.

It’s worth remembering that Davis didn’t lose his job because he was some corrupt autocrat along the lines of Louisiana’s Huey Long. Instead, he was the collateral damage from a Texas-sized conspiracy led by energy trader Enron to hike up the cost of electricity for Californians. The resulting budget crisis and public backlash led to a celebrity coup in which frustrated citizens were allowed, American Idol-style, to vote for a glamorous if completely unqualified movie star to replace Davis.

During his two terms in office Schwarzenegger liked to present himself as a centrist – a moderate Republican who could keep in check his more extreme party comrades from the state’s deserts, farm valleys and alpine fringes. Yet in his policy initiatives it was clear Schwarzenegger’s elbow always rested heavily on the scales in favor of corporations and wealthy individuals. There was also a streak of mean-spiritedness, as when, during his campaign to suspend nurse-to-patient staffing ratios, he belittled nurses by calling them a “special interest,” famously adding, “I kick their butts every day in Sacramento.”

It didn’t take long for Californians to realize Schwarzenegger the man was a far cry from the hero he portrayed on the silver screen, and by the time he left office his approval ratings had dropped to the mid-20s, on par with Richard Nixon circa 1974. During his seven-plus years in office, Schwarzenegger

Schwarzenegger’s predilection for championing the right of the few and powerful over the vast majority of Californians was epitomized by his effort in 2005 to use a plebiscite to pass four ballot measures that would have cut state spending, redrawn political districts and weakened unions. It was an epic overreach and he lost on all four ballots.

Schwarzenegger’s new portrait represents the shiny surface of a false idol – even the state seal it depicts might be seen as a manhole cover on the sewer of Schwarzenegger’s unique brand of opportunism. Schwarzenegger came to Sacramento and left with an ingrained dislike of the great mass of “ordinary” Californians. He spent nearly two full terms as governor proving that in real life he could never be the hero he pretended to be on the screen.

(2003 photo of Arnold Schwarzenegger: Gage Skidmore)
Related Topics:
Up Next

Harold Meyerson Speaks on ‘Inequality for All’