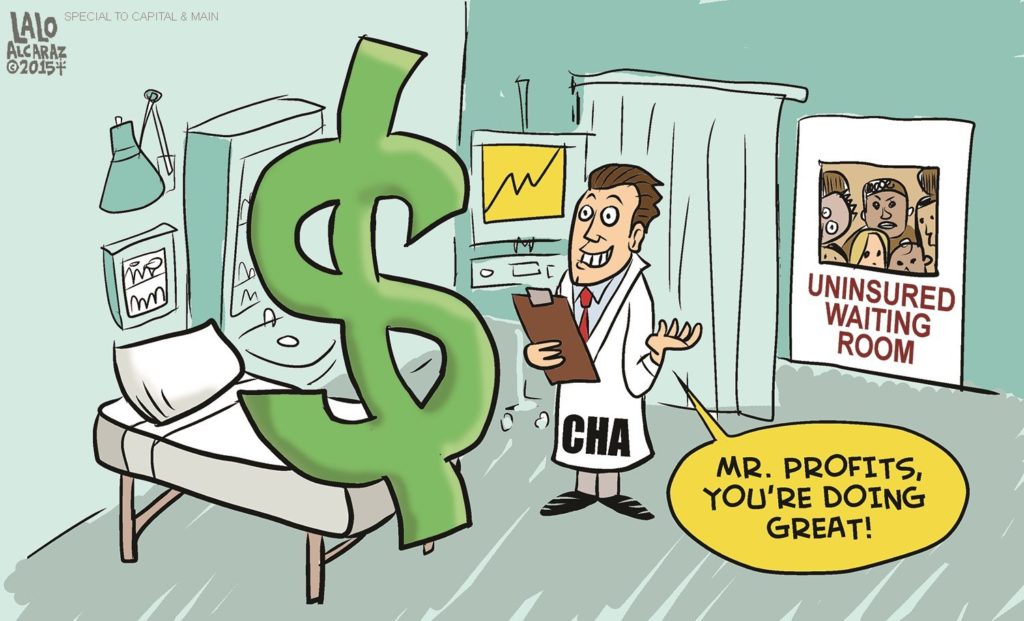 The nurses who showed up at state Senator Richard Pan’s Capitol office in May were furious. They had been assured by Pan, a Democrat from Sacramento, that he would be on their side when it came time to vote on Senate Bill 346, a charity care measure aimed at providing transparency to the state’s currently murky rules governing tax-exempt status for nonprofit hospitals.

But Pan, a physician who has risen to prominence this year as the sponsor of a mandatory school vaccination bill, abstained when the bill came up for a vote in the Senate’s health committee, effectively killing it when it fell one vote short of passing in that committee on April 29. The nurses alleged that the bill died because Pan withdrew his promised support after heavy, last-minute lobbying by the California Hospital Association (CHA). Pan’s spokesperson, Shannan Martinez, later issued a denial, saying in a statement that the Senator had “expressed concerns from the very beginning and never indicated support” for the bill.

But for the nurses, it was an all-too-familiar story: CHA had struck again.

Ask any California hospital nurse to name the past decade’s biggest game-changers in terms of improving patient care and workplace safety, and he or she will probably cite California’s landmark Safe Hospital Staffing Law  that took effect in 2004, or the Hospital Patient and Health Care Worker Injury Protection Act, passed in 2011. The former set the minimum nurse staffing levels deemed essential to control things like infections and to adequately monitor patients; the latter eliminated an epidemic of workplace-related spinal injuries that are crippling nurses — i.e., from lifting often obese trauma patients onto gurneys.

Ralph Nader: Hospitals have to be forced  to cut hospital-induced infections that kill 200 daily.

Ask a state consumer health care advocate what single law from the same period most benefited patients after a stay in a California hospital, and the answer is likely to be 2006’s Hospital Fair Pricing Act, which now protects uninsured patients from being driven into bankruptcy by emergency room and hospital overcharges.

What these three, seemingly no-brainer reforms have in common is that they were each staunchly opposed by CHA, the hospital trade organization representing the interests of more than 400 hospitals and health systems — including the state’s wealthiest for-profit and nonprofit medical centers, as well as its struggling safety-net nonprofits.

Led by its hard-charging, longtime CEO C. Duane Dauner, the secretive and somewhat transparency-averse CHA operates on an annual budget of roughly $20 million, according to its 2013 IRS Form 990. Its unwavering dedication to its member hospitals’ bottom lines, and effectiveness at killing disliked bills, frequently draw comparisons to the California Chamber of Commerce, with which it often partners.

CHA is one of the most effective and influential health care players, with a coveted seat at the negotiating table that has shaped the crazy-quilt mix of for-profit and nonprofit providers that has given California — and the nation — a bottom-ranked healthcare system. The trade group recently topped the money list for health care lobbying during the first quarter of the 2015-16 legislative session. Kaiser Permanente, the giant health maintenance organization (HMO), which is also a CHA member, was a close second.

The hospital association’s single-minded pursuit of its self-interest, critics say, comes directly at the expense of patients.

“Profit is the first priority,” consumer advocate Ralph Nader told Capital & Main. Nader singled out CHA and its physician allies in the California Medical Association (CMA) as prime culprits in perpetuating a health care system whose expense, low quality and inequality of access is “by historical standards, totally staggering.”

Malinda Markowitz: “CHA embodies everything that is wrong with corporate health care today.”

“You have enormous compensation packages for the heads of these hospitals,” he added. “You have the HMOs making billions of dollars a year; you have the hospitals having to be dragged kicking and screaming to reduce hospital-induced infections that, according the Centers for Disease Control, are taking 200-250 American lives a day in the entire U.S. So [CHA is] not paying attention to their own knitting inside the hospitals.”

It is a system, Nader charges, in which patients themselves are effectively denied a direct voice.

“The system is certainly a fragmented mess right now,” agrees Don McCanne, a senior health policy fellow with single-payer advocates Physicians for a National Health Program. “It’s the way the market does it, as opposed to the way public servants would do it. The government does it better, even though the market people keep saying, ‘Oh, the bureaucrats can’t get it right.’”

The full extent of CHA’s political reach can only be estimated since, unlike the CalChamber and its well-publicized Job killer list, the hospital association’s legislative agenda is a members-only secret,  hidden behind a pay wall on its website.

When CHA does take a public stand against patient-oriented reforms, it tends to be couched in a “what’s good for General Motors is good for America” logic that equates any proposed regulation with a loss of jobs and access to care, or as economically injurious to its financially struggling member hospitals.

When asked to cite any CHA-supported bills from the last decade that unequivocally put patients before hospital profits, spokesperson Jan Emerson-Shea declined to answer, but insisted that “CHA’s positions on legislative and regulatory issues are based specifically on the impact they will have on the ability of hospitals to continue providing 24/7 access to high quality, medically necessary care to every individual who needs treatment.”

“Hospitals tend to plead poverty and thus ask for more money and less oversight,” Wright said. “There are some that are operating at or below margins, and there are specific issues that need to be addressed, such as low Medicaid rates. But those issues don’t call for the industry-wide relaxing of standards around consumer protection, community benefit and safety. Many hospitals are doing well and frankly should be doing more for their communities, their workers and the improvement of the health system in general.”

Despite CHA’s resources and Sacramento clout, a loose, de facto coalition of the state’s patient advocates, including such groups as Health Access, Consumer Watchdog and California’s three nurses unions, has nevertheless managed to rack up some notable victories. Too often, however, those reforms come only after years of costly knockdown, drag-out fights with CHA that only pointlessly delay the desperately needed fixes.

Wright particularly remembers the five-year battle it took to pass 2006’s Hospital Fair Pricing Act, which set into place a policy where hospitals could not collect more than the Medicare or Medicaid charge for low- or moderate-income  patients who had no health insurance.

During the first year, Health Access couldn’t get the bill out of committee. The second year, the group got it out of one committee only to have it die on the Assembly floor. The third and fourth years it managed to get the bill to the state Senate, but it wasn’t until the fifth year that the act made it to the governor’s desk, where it was finally signed into law.

“It was like the five stages of hospital grief,” Wright recalls. “[CHA’s] first reaction was denial — ‘We don’t do this.’ When we showed them the bills and the documentation and the stories and the bankruptcy filings and all that, then, ‘We can do it, but we don’t need regulation or a law to do this, we’ll develop some voluntary guidelines.’ So then we had to go back and show how they weren’t abiding by the voluntary guidelines.

“And at the same time there were lawsuits and national media and national congressional hearings. And then we were into the stage of negotiating, where they would accept it but only if it included preemption of local ordinances and all these other poison pills. Finally they sort of conceded to an agreement where, Okay, we’re going to be willing to do this.”

Wright’s group is not alone. CHA bitterly battled its nemesis, the California Nurses Association (CNA, which is a Capital & Main funder), over the union’s landmark safe staffing ratios law signed in 1999. In a process that dragged out over a dozen years, CHA was first rebuffed in a 2003 attempt to gut the statute via lawsuit. That was followed by another court rejection the following year of an illegal “emergency regulation” issued by then-governor Arnold Schwarzenegger. Since its implementation, study after study has supported the law’s assumptions connecting increased staffing and quality of care.

Yet CHA again flexed its muscle, decrying as an “unfunded mandate” CNA attempts to get relief for the 52 percent of California nurses reporting chronic back pain, and the 12 percent who are forced to leave the profession each year because of spinal injuries sustained while lifting patients. The state’s safe patient handling law’s 2011 signing by Jerry Brown eventually took seven years and five vetoes before it became law.

“CHA embodies everything that is wrong with corporate health care today,” declared CNA co-president Malinda Markowitz outside of the hospital association’s Sacramento headquarters during a May demonstration. The nurses held the action partly as a wake for  the Charity Care bill killed by Richard Pan’s lack of support— part of their now multiyear effort to get a charity care and community benefit services reform act passed.

“Year in and year out,” Markowitz continued, “[CHA] pressures California legislators to kill vital patient and workplace protection legislation, and to enact special interest legislation whose sole purpose is to inflate the profits of multibillion-dollar hospital corporations.”

The nurses have vowed to introduce another version of Charity Care reform next year.