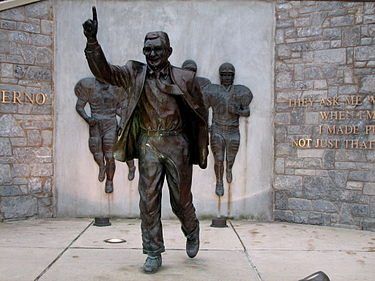 Last week Penn State University released a report by former FBI Director Louis Freeh about the Jerry Sandusky scandal. It confirms what most of us already believed—that the leadership at Penn State had reason to believe Sandusky was molesting children but failed to do anything.

Sandusky’s been convicted, and several key officials—Penn’s president Graham Spanier,  athletic director Tim Curley and football coach Joe Paterno —have been fired or have been convicted in the press and will likely soon be convicted in a court. (Paterno died last January.)

Now the debate is turning to the responsibility of the National Collegiate Athletic Association (NCAA), the idea being that the NCAA should impose sanctions on Penn State.

The main idea of this debate is that Penn State’s cover-up says something about the influence of football on a college campus, and on our culture at large. It doesn’t. This isn’t to say the Paterno legend is irrelevant, just that the real issue is cover-ups, and the dangers of thinking that criminal behavior can be controlled by good old-fashioned responsibility rather than by clear regulations enforced by police and our collective power—government.

Cover-ups are all too common these days at big institutions—churches, businesses, government or college campuses. After all, the most well-known child molestation scandals have been in the Catholic Church, which as far as I know doesn’t have a big-time football program.

Failure to report crimes on college campuses is not unique to Penn State. Indeed, most campuses respond to allegations of serious criminal activity—such as rape—internally, rather than passing on information to the police. Last year Yale was cited for failure to report rape statistics on its campus, but the citation merely highlights the basic problem, which is that Yale and other universities are putting themselves in charge of rape investigations on their campuses—reporting statistics after the fact rather than the allegations when they hear about them.

This isn’t just a problem of sexual abuse. Back in 2007, a National Bureau of Economic Research study found that in the previous five years fraud whistleblowing in the financial sector was declining. It’s likely not a coincidence that six months later the financial world blew up, and we’re still living with the consequences. One of the great scandals of the collapse, however, is that many people saw it coming and nobody did anything to prevent it until it was too late.

And this year, news came out that Walmart had not only allegedly engaged in a multi-year scheme to bribe Mexican officials to the tune of $24 million, but that upon learning about this, the CEO and other top officials covered up the crime. It took seven years for the news to come out, and Walmart is fighting hard to avoid the consequences.

The reasons for these cover-ups are clear—Walmart, Penn State and the Catholic Church have interests they needed to protect. They feared bad press, government fines, or loss of donors, or declining membership, and those interests determined their actions.

Woody Guthrie at 100: This Party Is Your Party