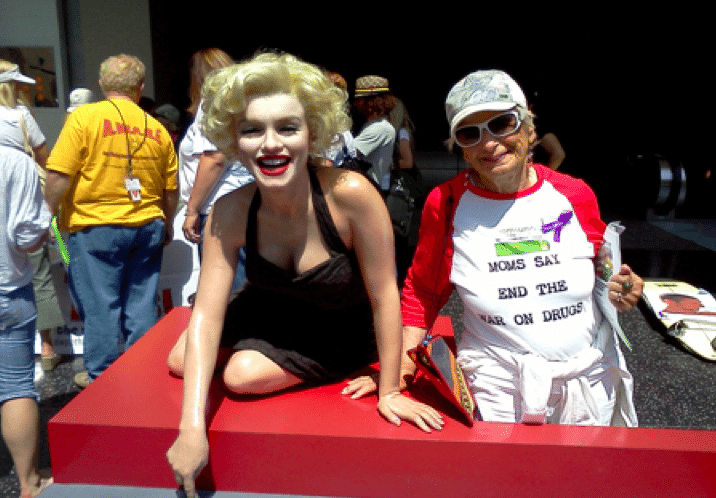 The author with a friend.

Back then I was one of those middle-class married women who never dreamed of  a career.  Then came Betty Friedan and The Feminine Mystique. And so in my early 40s, I enrolled in the University of Pittsburgh’s School of Social Work master’s degree program.

On the very first day of class my professor wrote on the blackboard, “Social workers believe in ambivalence.”  I was home.  I had always been uncomfortable with unalterable truths — generalized philosophies and rules and theories that were supposed to apply across time, place and circumstances.

Now that, 50 years later, there is so much attention being paid to aging  (and it’s me the experts are referring to in their speculations), I’ve become weary of all  the guarantees being offered for a  healthy, long — and I do mean long — happy life.

No wonder I was so delighted this year when I discovered Marc Barasch’s 1983 study, Breaking 100—Americans Who Have Lived Over A Century (Quill).  I happened on his book at the Library Book Store and it was only a dollar, so I bought it to inspire my 97-year-old husband. The following statements come from the centenarians interviewed in the book.

Through Barasch’s study I met survivors of the Big One-Oh-Oh and learned their contradictory tips for longevity:

– Eat a pound of lean meat a day or Eat only eggs, milk, butter, and cheese.

– Never drink alcohol or Drink a pint of whisky daily.

– Smoke ten cigars per day or Avoid tobacco in any form.

– Be at peace with yourself and all others or Be ornery. Have at least one good fight with somebody every day.

So much for unalterable truths! And so, according to the book’s research chair, “Nearly all displayed a peculiarly gracious attitude toward their bout with time . . . We feel within these people a tenacity, a feistiness, a sense of self less encumbered by the concerns over looks, status, accomplishment by which most of us gauge ourselves.”

I Googled  “Centenarians, United States”  and was overwhelmed with information. In 2010 they numbered an estimated 70,490. — a figure that grows annually.  More important  is the fact that  with all the medical advancements on the  drawing board, living to 100 or more may be inevitable for many of us.

No doubt feeling, after reading about the above centenarians, that I don’t have to prove how seriously academic or intellectual  I am, I didn’t check out too many other Web sites.  Only the short ones that apply to the somewhat independent and  gratefully functional of us — not those  afflicted with too much illness, pain, poverty or loneliness.

For the moment I don’t want to remind myself of what a downwardly mobile America means  to its most vulnerable–the elderly, women and children  Instead I’m taking the day off from reading about the rising poverty line in America  and I’m off for a walk on the beach with my 58-year-old son — who is also one of my best friends.  It wasn’t always this way, but one of the gifts of longevity is that there is time to make loving and honest sense out of old complicated relationships.  As my mother used to say, “If you live long enough  . . .?”

I say, try a little Eleanor Roosevelt:  “When you cease to make a contribution you begin to die.”

Tear Down This Wall St.

There’s No Freedom Without Arrests