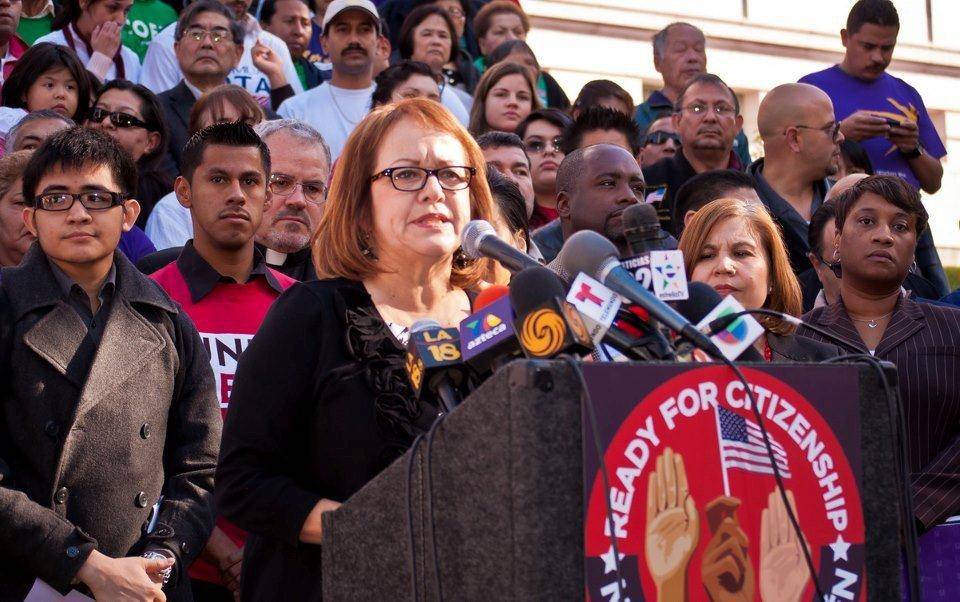 María Elena Durazo at a California for a Path to Citizenship rally.

Seven years ago María Elena Durazo, the head of the Los Angeles County Federation of Labor, stood on a stage erected at the intersection of Wilshire Boulevard and La Brea Avenue, facing a sea of demonstrators who had just paraded miles in support of immigrant rights. In the twilight of that May Day, as Durazo addressed several hundred thousand people, the march for immigration reform seemed unstoppable – an irresistible historic tide that was poised to sweep away any objections.

Then came an angry backlash that saw anti-immigrant legislation passed in Arizona and Alabama that made Proposition 187 – California’s 1994 ballot initiative curbing immigrant rights – seem tame by comparison. Frying Pan News sat down with Durazo to discuss the pending immigration bill in Congress, as well as a new student film competition that her organization is sponsoring with UNITE HERE, a union whose members are largely immigrants.

Frying Pan News: In 2006 nothing seemed to stand in the way of immigration reform. Yet here we are today, still uncertain of whether a new bill providing a path for citizenship will pass Congress. What happened after the big march?

Maria Elena Durazo: In 2006 it was mostly anger toward the Sensenbrenner Bill  [the Illegal Immigration Control Act of 2005, passed by the House of Representatives but rejected by the Senate in 2006] that motivated the rally. Neither before or after 2006 were we able to mobilize that many people on a single day on immigration reform.

FPN: So it helps to mobilize people if they’re under attack?

Durazo: Unfortunately it moves people more dramatically than saying, “We can win this,” or “We can win that.” But it doesn’t help us to purely fight on the defensive. It’s up to all of us to take advantage of the moment, and the anger and the consciousness of the attacks on us, and turn them into something else.  In the process of organizing against Prop. 32 last year we incorporated the fight for Prop. 30 – and won on both.

FPN: You can understand why Republicans have been dragging their feet on immigration – they only see 11 million new Democratic voters. How do you allay Republican fears?

Durazo: I don’t think we have to allay those fears.  If they truly have an agenda that is attractive to the new Americans then it’s up to them to lay it out and win folks over. I don’t think they’re foolish enough to think that 60 or 70 percent of the new Americans will become Republicans. But they don’t need 60 to 70 percent – George [W.] Bush won [in 2000] with little over 30 percent of the Latino vote.  I think the smart [Republicans] are saying, “We only have to win over 30 to 35 percent in order to stay in the running.”

FPN: Why else are the GOP interested in immigration reform, besides attracting voters?

Durazo: That’s the political side. The other side is that they are doing this for business interests, which need to have more workforce stability, especially certain industries that completely rely on immigrants. FPN: What do activists need to know about those parts of the country that don’t agree with the need for immigration reform – where people are anti-immigrant?

Durazo: Different parts of the country have evolved. There is a very strong coalition called Bible, Badges and Business that is conducting a very proactive, well-resourced campaign in a lot of the Southern states — or states where we need to get Tea Party types. I don’t know if we’ll ever convince the Tea Party, but at least we need to give cover to enough Republicans to be able to pass immigration reform.

That coalition didn’t just happen overnight. Over the years all the work we’ve done all over the country has been to continually reach out to various religious denominations. It is no longer the Catholics – it is the Baptists, the evangelicals, the Protestants. And we had been reaching out to law enforcement for many years. Now it’s an organized voice that says, “If you’re going to carry out your work as the chief of police for public safety, you’ve gotta acknowledge that these folks need to feel safe themselves. We can’t do it without fixing the system.”

FPN: There was a time when unions – including the United Farm Workers – were dead against allowing in immigrant workers. Why have unions changed their tune?

Durazo: It was the insistence by four or five unions in 1999, when the AFL-CIO convention was held here in L.A., that this was the only choice we had. With the decline of memberships in unions, this group said, “You might not like it, but we either grow as a labor movement by creating ways for immigrant workers to be a part of the movement, or we lose our political support.”

FPN: Is there still some resistance to reform in the labor movement?

Durazo: There are individual union leaders like that. Leadership is leadership – there’s good and bad. But I haven’t [encountered] that on immigration reform as a whole. If we had that kind of pushback we would not be at the point where [AFL-CIO president Richard] Trumka is making immigration reform one of two national priorities. Anybody who opposes immigration reform probably is dying and doesn’t care about growing.